LSE’s Praveen Priyadarshi charts the history of urban governance in India and finds it key to understanding democracy and economic growth in contemporary India.

The observation that India is a country of villages is often repeated both in casual conversations and systematic analyses of the country. Scholarship on India, with its focus on villages, perpetuates the notion; as a result, relatively less academic attention is paid to urban India. While it is true that 72 per cent of Indians live in villages, the statistics obscure the fact that more people live in Indian cities and towns than in all of Brazil. If urban India were a country, it would be fifth largest in the world in terms of population size. 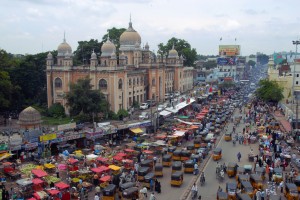 In an earlier post on this blog, Stuart Corbridge persuasively argues that India remains an important site for social science research and identifies the important questions in social sciences that research on India will help answer. Corbridge points to India’s sustained democracy despite ethnic and regional diversity and its economic growth despite weak institutions as two major puzzles that will continue to excite social science scholars. One of the ways to seek answers to these puzzles is to focus academic attention on urban India.

The challenge for the Indian democratic state to manage multiple diversities is accentuated in its urban centres. Regional, ethnic and economic fault lines are drawn much more sharply in urban India than in rural parts. Moreover, nothing has signified the weakening of institutions more starkly than the recent anti-corruption campaign spearheaded by the urban middle classes. The recent thrust in economic growth has also come from manufacturing and service sectors located in urban centres; indeed, the narrative of India’s economic success has often been constructed with the help of stories from cities such as Bangalore and Gurgaon. In sum, the question of how India will manage and strengthen its democracy and economy cannot be adequately answered until the following question is asked: how does India aim to govern its cities?

This question becomes more significant given that urban governance has not been a political priority for successive Indian governments since Partition. The governance structures that were uncritically adopted at the time of independence were created during the colonial era with two goals in mind: firstly, to provide urban amenities and services to select city areas inhabited by colonial officials, expatriate businessmen and Indian propertied classes and their families; and secondly, to keep a close check on the populations inhabiting other areas.

Owing to emerging pressure from the city-based Indian middle classes, urban governance was among the first legislative spaces in which ‘native Indians’ were allowed to participate by Viceroy Ripon in 1882. But this participation remained symbolic rather than substantive, with little political authority vested in these legislative bodies. Instead, the executive wing headed by a civil servant who reported to the regional and central governments retained true control. This dual governance principle aimed at providing for the select and controlling the rest has had a long lasting impact on urban governance in India since the post-independence state failed to overhaul governance structures in cities. As a result, the duality principle continues to inform urban governance—vocal and propertied classes are provided with urban services and allowed symbolic participation while regional states keep a tight control over cities through the help of civil servants.

Rural self-government, which was at the heart of Gandhi’s vision for India’s future, still had some political currency after independence. Although the Nehruvian model of centralised planning for industrialisation dominated political discourse, inertia surrounding Gandhi’s vision ensured that some steps toward rural self-government were taken. Urban governance, meanwhile, remained static as power was retained by regional, state-appointed bureaucrats. Consequently, cities continued to be governed top down with only symbolic input or involvement from the people who inhabited them.

Even in the early 1990s, when the Indian government amended the constitution to legislate local governance bodies, the emphasis remained on rural India. Urban governance occurred to the government as an afterthought and the seventy-fourth constitutional amendment was appended with the Panchayati Raj Act in order to provide urban local bodies with constitutional legitimacy parallel to rural local bodies. The amendment proposed political decentralisation and the establishment of a local state at the city level with relative political and planning autonomy.

Regional states were reluctant to devolve control of planning and development functions to rural local bodies and, for obvious reasons, significantly more so when it came to the urban areas. Cities are economic hubs that generate major tax revenues; moreover, controlling cities means controlling urban infrastructure and, by implication, the entrepreneurial and business classes who also happen to be the main financers of political parties in India. Despite their demographic inferiority, cities also shape political discourse—urban middle classes may not vote in high numbers, but they are politically vocal, making control over cities essential for both political parties and regional-level states.

For these reasons, the constitutional amendment act that provided a framework for third-tier, city-level governance has not resulted in autonomous governance structures. Even though local elections are held regularly and political representatives occupy urban local bodies posts, regional states continue to enjoy political and administrative control over urban governance structures.

It was in this context that that the launch in 2006 of the Jawaharlal Nehru National Urban Renewal Mission (JNNURM) raised hope. The mission aimed to aid 63 cities across India to prepare their infrastructure and service delivery mechanisms for the increased pace of urbanisation that economic liberalisation unleashed. Interestingly, the central government used JNNURM funding as an incentive to encourage regional and city-level governments to reform local urban governance in accordance with the seventy-fourth Constitutional Amendment Act.

The mission concludes in 2012 and a comprehensive assessment of its successes and failures will require more time. But evidence emerging so far does not suggest that it has successfully transformed urban governance structures in keeping with the constitutional amendment act. Cities still do not govern or plan for themselves; they continue to be governed directly or indirectly by the regional states.

There is much to be learned about India from urban governance reform attempts such as JNNURM. These efforts sit at the crucial intersection of political and economic life of contemporary India. On the one hand is the political issue of decentralisation and deepening local democracy; on the other is the economic imperative to manage urbanisation productively. As such, it is in the structures of urban governance that the future of India’s economic story and democratic trajectory can be observed—no doubt, understanding urban governance is crucial for understanding contemporary India.

Praveen Priyadarshi is a PhD candidate at LSE’s Department of International Development.

Bad Behavior has blocked 1048 access attempts in the last 7 days.