Manisha Priyam argues that the Congress’s attempts to position itself as growth-oriented party may not be sufficient to deflect Narendra Modi’s development focus, political rhetoric, and wily incentivising.

Even before the campaign process has reached its full momentum in Gujarat, a third time victory for Narendra Modi is being considered the most likely outcome of the state elections. On this basis, speculation is rife that this Gujarati leader is likely to assume a national role, possibly as the next prime minister. Last week, the British government’s decision to lift the diplomatic embargo on Modi, and UK High Commissioner to India James Bevan’s visit to Gandhinagar, are also being seen domestically as recognition that Modi is the state’s democratically elected leader, and may continue to be so. More importantly, both Modi’s chances of winning the elections and the British advances are in many ways a direct outcome of ‘good governance’, understood primarily as robust economic growth—higher-than-national average growth rates for India, in contrast to the low growth rates since the recession hit Britain nearly four years ago. 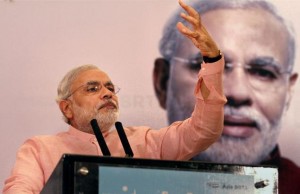 Although there is merit in accepting the argument about robust economic growth inGujarat, electoral outcomes are unlikely to be a linear consequence of high growth rates. Electoral competition in the state is far more complicated and nuanced than what simplistic media portrayals would have us believe. The nature of the upcoming competition needs to be unravelled from the terrain of practical politics, by analysing the complex chain of statements, speeches, strategies, and counter-strategies of the main contenders: the ruling Bharatiya Janata Party (BJP) and the opposition Congress Party.

Strikingly, Congress seems unwilling to rake up the issue of the 2002 communal riots, even though Modi’s alleged role in these riots has been the mainstay of the party’s national opposition to this leader. The thinking here is that strident attacks on Modi – especially by Sonia Gandhi who called him a “maut ka sudaagar” (trader of death) in the 2007 elections – worked to Modi’s advantage, portraying him as a leader taller than he was in reality. This logic is surprising, especially as the courts have recently sentenced Maya Kodnani, a minister in Modi’s cabinet, to 27 years imprisonment for her role in the Naroda Patiya communal riots. Considering that the courts have not been able to indict Modi yet, this conviction should have been the best opportunity for the opposition to raise the pitch against Modi.

Instead, the Congress’s counter-strategy is built on different grounds: ramping up local issues and grievances and concentrating on pockets of regional disadvantage, especially in Saurashtra. By associating itself with the struggles against displacements caused by the Sabarmati river-front development project or in the Vadilal-Sarabhai Hospital area, Congress has been aligning itself on the ‘right’ side of popular grievances in the activist mould—organising people, leading protests, and moving the courts for redress.

The party’s grassroots base was evident in the 2010-11 panchayat elections, and Congress has a high vote-share of 30 per cent or more in many districts across the state. This, however, has not translated evenly into enough seats for the party because of the known difficulties of the first-past-the-post system. But the party’s most impressive pre-poll offering was its announcement of the ‘Ghar nu ghar’ scheme promising affordable housing for the poor in August this year. The huge turn-out for filling housing applications – nearly 1.5 million people reportedly filled the forms – led Modi to roll out a direct counter-strategy in the form of Garib Kalyan Melas, promising over Rs. 2,000 crores (approximately GBP 300 million) for housing the poor.

Regionally, the Congress is concentrating on Saurashtra, where farmers have been hit by drought and debt and where new projects characteristic of Modi’s state-wide development efforts have not been launched. The region accounts for nearly one third of the total seats in the state assembly and is the stronghold of rebel BJP leader and former chief minister Keshubhai Patel, who now leads the Gujarat Parivartan Party. The Congress-led central government’s recent decision to lift the ban on cotton exports aimed directly to help cotton farmers of this region, and win favours for the party inGujarat.

To further this strategy, Gandhi launched the party’s campaign on October 3 in Rajkot, in the heart of Saurashtra. In her inaugural speech, she concentrated on showcasing the national government’s recent achievements in spearheading economic policy reforms and articulated the region’s agrarian distress. Avoiding direct references to Modi, Gandhi’s offensive remained limited to pointing out the policy inconsistencies in the BJP’s stance on allowing foreign direct investments in retail trade. She also took pains to justify the removal of subsidies (and therefore the rise in prices) of cooking gas—she argued that the state government could lower the Value Added Tax imposed on cooking gas, thereby passing the benefits on to the poor. How much of this complicated federal finance will be understood by Gujarat’s rural poor electorate will be tested soon. But Gandhi’s campaign was successful in driving the point home that the Congress is a party of serious economic policy reformers that could offer a growth-oriented government (like Modi’s) suitable to the Gujarati palette.

To the BJP’s advantage is the fact that there is no state-wide anti-incumbency, even after a decade-long rule. Economic indicators are robust, with state GDP growth rates averaging 10 per cent or more between 2002-10—the mythical double-digit target that the national economy has aspired to but failed to achieve under Manmohan Singh’s leadership. Not surprisingly, Modi has raised this point to a campaign pitch by asking the prime minster to ‘learn’ from the Gujarat growth story. The sectoral composition of this growth rate, particularly the advances in agriculture and manufacturing, have received wide attention.

But Modi is not relying on these laurels alone. He announced a series of cash incentives hours before the model code of conduct of the Election Commission of India set in. These include promises of farm loan and electricity bill waivers, enhanced allowances to home guards, payment of arrears to government school teachers, and the promise of a salary for the village sarpanch. The handouts are small, but significant. Lower levels of government officers, organised under the umbrella body of the Gujarat Rajya Karamchari Samiti, are said to oppose Modi; the cash transfers build a new constituency of supporters while countering opposition from the lower echelons of the bureaucracy. Noted social scientist Achyut Yagnik also points out that Modi’s political craft is such that he passes off cash benefits from centrally sponsored schemes as his own initiatives. Congress’s local unit, too, concedes Modi’s ability to outwit them on their strong points and contest anything the Congress may have done for the state at the federal level.

Of greater bearing for electoral fortunes is Modi’s use of political vocabulary that seeks to hype his achievements and castigate the ‘Congress in the centre’. In election rallies, Gandhi and the government are his targets, as if the party’s state unit led by Babariya, Gohil, Modhwadia, and Vaghela have no bearing. Modi also claims that his development projects are merely filling the development deficit created during Congress’s long innings—it is now, he says, that he will create a ‘divya bhavya’ (grand) Gujarat. Yagnik notes that this promise appeals to young Gujaratis, especially as urban migration is on the rise in the state: “The young ones want to put their parochial identities behind.”

Victory, if it comes, is unlikely to be attained without local competition, especially as the understanding grows that growth pursued in a certain way produces grievances amongst the displaced and the rural poor that can be woven into a counter-campaign strategy. For now, it is advantage Modi, but there is much political competition to be overcome before the match can be declared in his favour.

An earlier version of this article appeared in Outlook India under the title, “Modi’s Micro Battles”.

Manisha Priyam recently completed her doctorate at LSE’s Department for International Development. She is now associated with an LSE research project, ‘ An Ethnography of Local Democratic Governance in Contemporary India 2012-2015’, led by Dr Mukulika Banerjee, Department of Anthropology, LSE.