Nagender Chindam explains why non-resident Indians are campaigning for the right to vote from abroad.

Eight million Indian citizens currently reside outside their home country. Thanks to the ‘Representation of the People (Amendment) Act 2010’, they are eligible to vote in Indian elections. The only catch is they have to be present in their respective constituencies on election day to do so.

Millions of citizens who are unable to return to India for polls – including innumerable students – are therefore denied their right to vote. But many non-resident Indians (NRIs) increasingly believe that all citizens should have equal voting rights, regardless of where they are during elections. Prime Minister Manmohan Singh acknowledged this sentiment in 2010 when he described NRI calls for absentee ballots as a “legitimate desire”. But in February 2011, the Minister for Overseas Indian Affairs announced that there were no specific plans to introduce online voting or postal balloting for NRIs, and that the Election Commission would have to decide when and how to proceed on this matter.

Since little progress has been made on this front, I founded Pravasi Bharat to campaign for the right for Indian citizens to vote from abroad. In October, the organisation held a march for absentee ballots in London, launched an online petition, and appealed to Prime Minister Singh through the Indian High Commission. In a letter, we pointed out that “if Gandhi were alive today and happened to be living abroad he would have fallen foul of the Indian election law which requires non-resident Indians to be physically present in the constituencies where they are registered to be able to exercise their franchise. Swami Vivekananda, Mahatma Gandhi, Dr Bheem Rao Ambedkar were non-resident Indians for some time. So potentially they would have missed the opportunity to vote.”

As Dr Naresh Hanchate, a US-based member of Pravasi Bharat, puts it, “it is fair to provide equal rights to vote irrespective of where voters live. A significant percentage of the nation’s intelligentsia, including doctors, engineers and professors, live abroad to advance their knowledge and technological know-how. It’s crucial for the nation to include NRIs in the voting bank.”

Nagender Chindam is enrolled in an executive certificate course at LSE’s Centre for the Study of Human Rights. 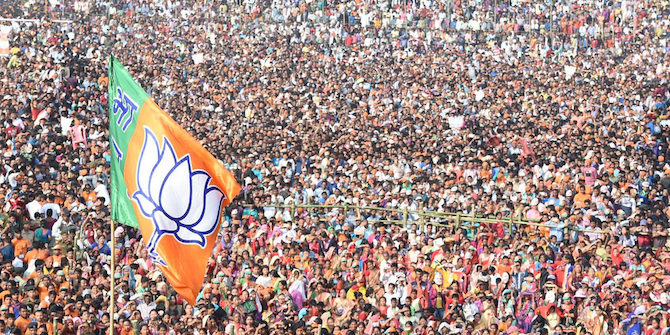 Bad Behavior has blocked 1183 access attempts in the last 7 days.