Sanghamitra Bandyopadhyay and Elliott Green investigate the relationship between fertility and wealth in a non-European context in an effort to better understand global income distribution.

The relationship between fertility and wealth is a very important one in economics, demography and many other social sciences. It allows policymakers to understand and assess future trends for public expenditures as well as the overall prosperity of a country. More importantly, it may hold a key to understanding how societies evolve economically. 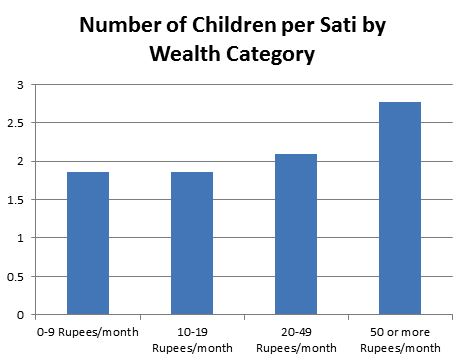 Thomas Malthus originally theorised that in pre-modern societies – prior to the onset of mortality and fertility decline in the nineteenth century due to the introduction of public health and vaccines – rich people would have more children than the poor. His thoughts have also formed the basis for recent work by economists and economic historians such as Oded Galor and Gregory Clark, to name a few.

There is, however, painfully little evidence to suggest that this relationship really exists, mostly due to the lack of reliable data on fertility and household wealth levels from the pre-modern period. Whatever evidence exists relates primarily to northern and western European countries. This prompts the question whether this relationship existed worldwide, or whether it was simply a localised European phenomenon. Answering this question is important, as it may also hold the key to understanding why global income levels today are so disparate, as argued by Gregory Clark in his book A Farewell To Alms: A Brief Economic History of the World.

In a new paper, my co-author Elliott Green and I have used data on widow suicides or sati –  a ritual involving the self-immolation of widows on the funeral pyres of their husbands – from the suburbs of Calcutta in early nineteenth-century Bengal to test whether the relationship between fertility and wealth existed in pre-modern India. The records used in the paper date from 1823-26, and were collected by British officials to monitor the practice. Sati was banned by law in 1829, though the collection of data by the officials was intended to distinguish between the ‘legal’ and ‘illegal’ practice of sati. The records used in our study consist of complete data on 161 widows’ names, caste, number of children (sons and daughters), and their husbands’ income and profession.

On analysing the data we find that there indeed exists a positive relationship between the number of children in the household and the husbands’ incomes. In addition, satis whose husbands’ incomes were within the richest quartile had roughly one more child on average than those in the bottom quartile. We also find that this relationship is quite robust to allow for variations in caste, the age of the widow at which sati is conducted, location and date of death, and also for controlling for the husbands’ professions rather than their income levels.

Thus, the incidence of a positive relationship between fertility and wealth is not restricted to pre-modern Europe. Further research for other non-European countries would add to the growing research on this relationship and facilitate our understanding of the historical evolution of the global income distribution.

Dr Sanghamitra Bandyopadhyay is a Research Associate at STICERD at LSE and Senior Lecturer in Economics at Queen Mary, University of London.

Bad Behavior has blocked 2954 access attempts in the last 7 days.