David Lewis explains the current political standoff in Bangladesh and argues that it is widening the country’s secular-religious divide.

Once again, Bangladesh’s democracy is in turmoil. The current Awami League government is nearing the end of its term, and new elections need to be held before January 2014. The main opposition Bangladesh Nationalist Party (BNP) is refusing to take part, claiming the government will rig the elections, and has encouraged its supporters and coalition partners to take to the streets. BNP leader Khaleda Zia has called for a mass movement to paralyse the country if her election-related demands are not met by 24 October. Why is this happening? 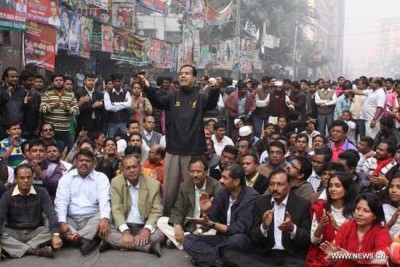 The main source of contention is the Awami League government’s 2011 decision to abolish the 13th Constitutional Amendment (1996) that required that a neutral, three-month Caretaker Government be set up in order to oversee general elections every five years. This arrangement was introduced following the ‘people power’ removal of Bangladesh’s last military government in 1990, and it has worked relatively well. The three general elections held since returned the opposition party to power under conditions that were judged to be free and fair.

But in 2006 the system fell apart amidst allegations that the ruling BNP-led coalition government was abusing its power and filling the Caretaker Government with supporters. Following a steady deterioration of law and order, a military-backed interim government was installed, and despite army promises to make sure that democratic elections would be held, the nation held its breath, wondering whether this heralded the return of authoritarianism. Elections eventually took place eighteen months later in December 2008, and the Awami League was returned to power with a massive majority.

Determined to avoid a rerun of the chaos involved in setting up a Caretaker Government, the Awami League government called for a new system. A reformed Election Commission was given the job of overseeing elections. Many people perceived this as an attempt by the Awami League to ensure that it would be elected for an unprecedented successive term of office, rather than a sincere attempt to strengthen the country’s democratic institutions. Some feared a sense of entitlement to govern among the Awami League’s leadership, since they are the party of Bangladesh’s founder Sheikh Mujibur Rahman (now led by his daughter Sheikh Hasina Wajed).

The BNP has therefore made a return to the old system a precondition for participating in the forthcoming elections. The result is a standoff: which party will be the first to blink? Citizens watch on with growing anxiety at this latest chapter in the country’s post-1990 journey further into illiberal democracy and confrontational politics.

All this comes at the end of a turbulent year for Bangladesh, and is likely to deepen the secular-religious divide that plagues the country’s political culture and society. The traditional fault line of Bangladeshi identity – are we Bengali first and Muslim second, or vice versa? – has been exacerbated by the Awami League government’s attempt to consolidate its popularity by establishing a War Crimes Tribunal to deal with unfinished business arising from the 1971 Liberation War. Many people feel the tribunal is necessary for closure, but others see it as a distraction from the country’s contemporary challenges such as power shortages, growing social inequalities, and climate change. The tribunal’s establishment was a popular move, but it has sparked backlash among religious political parties and groups. Those being tried for collaboration with the Pakistani forces in 1971 include leaders of the Bangladesh Jamaat-e-Islami, a small but important coalition ally of the BNP, as well as BNP member of parliament Salahuddin Quader Chowdhury, who was sentenced to death last week.

In February, the Awami League tried to turn protests against the perceived leniency of the tribunal’s sentencing of a Jamaat activist to its advantage. But Bangladeshis have tired of the party’s attempts at self-promotion. More importantly, religious sensibilities were aroused by allegations that protests had been organised by secular activists, who were portrayed as ‘atheist bloggers’. In response, a grassroots movement from the rural madrassas known as Hefazat-e-Islam conducted a mass protest in Dhaka – with tacit support from the BNP, many believe – and was met with heavy police violence, leaving at least 11 people dead (an official figure challenged by some).

The result has been further polarisation of the secular-religious divide that threatens the country’s stability in the short term, and an added religious dimension to Bangladesh’s confrontational politics. The Jamaat-e-Islami has been forbidden from taking part in the elections, but it is watching keenly from the side-lines. During recent municipal elections in four areas, BNP candidates won overwhelmingly, using a populist message of ‘Islam in danger’ to mobilise voters.

It is difficult to predict where the country goes from here. Having installed a democratic system through popular agitation and a degree of foreign (donor) pressure in 1990, Bangladesh has been unable to reform its political parties and leadership in ways that make it possible to break free from traditional ‘winner takes all’ patronage politics. An attempt by Noble Laureate Muhammad Yunus to establish a new political party in 2006 quickly foundered. The Awami League leadership, unable to forgive his political ambitions, has hounded Yunus, most recently with allegations of tax avoidance. Meanwhile, the country’s political elite are derided for widespread corruption and cronyism; for example, the owner of Rana Plaza – the factory that collapsed, leaving more than one thousand garment workers dead – was an associate of the Awami League who allegedly bought the land illegally and flouted planning and labour regulations to set up a factory in unsuitable conditions.

In this political environment, Bangladesh’s problems are likely to get much worse before they get better. The BNP knows it will need to contest the elections, and will probably agree to participate at the last minute, whether or not the rules are changed. The more confrontational BNP’s stance is, the more support it generates, and the greater the likelihood of it winning the elections whey they take place. If BNP wins, the party will undo the ban on Jamaat-e-Islami and overturn the tribunal’s war crimes verdicts. Such steps would unleash further instability and polarisation, which Bangladesh can little afford at this juncture.

Bad Behavior has blocked 1505 access attempts in the last 7 days.