On Wednesday, 19 February, Dr Shakuntala Banaji, Carla Ferstman, Suresh Grover, and Dr Biju Mathew engaged in a panel discussion chaired by Professor Chetan Bhatt at LSE on key questions about human rights and impunity that arose in the aftermath of the Gujarat carnage of 2002, and the subsequent rise of Narendra Modi as a national leader and the BJP’s prime ministerial candidate. In this post, Dr Banaji establishes the context for that discussion (click here for a podcast of the event).

In February 2002, after an alleged altercation between far-right Hindu activists on a train stopped at Godhra station, in Gujarat, India, and some Muslim stallholders in the vicinity, a fire started either inside or outside one of the train compartments. Fifty-nine Hindutva activists, including children, died in the horrific fire that ensued. In the hours and days that followed, a series of hate speeches holding the entire Muslim community of Gujarat responsible for the train deaths were broadcast by networks of the Hindu right in Gujarat. 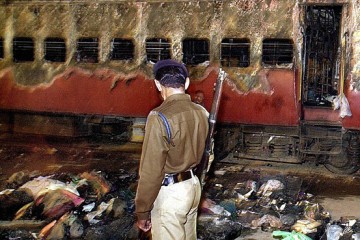 There followed a sustained, organised and, according to the evidence of many, officially sanctioned pogrom. In April 2002, an exhaustive report by a team of researchers led by Smita Narula of the international NGO Human Rights Watch concluded that the burning, looting and displacement of hundreds of thousands of mainly Muslim citizens, and the torture, burning, decapitation, sexual violation and murder of more than one thousand others, was carried out by right-wing Hindutva mobs with the complicity and often the participation of members of the then government. The report has since been corroborated by filmed and televised evidence, journalistic reports and fact-finding missions, meticulous academic research, and the legal testimonies of many of the accused, including government officials, right up to those in the highest echelons of the government and bureaucracy.

This was not the only religious pogrom in India’s fraught political history. Nor was it the only one in which supporters of a political party shamelessly participated. There have been and should continue to be attempts to bring to justice all those who participated, for instance, in the anti-Sikh riots of 1984, from across the political party spectrum.

However, although Gujarat 2002 was the most televised and visually displayed pogrom in the history of India, and despite all the evidence of its vicious brutality, it does not appear to have harmed the political fortunes of those in power at the time. Last year, Gujarat Chief Minister Narendra Modi was declared the prime ministerial candidate by the opposition BJP for the 2014 Indian general election, which is to be held in the next few months.

During research on the relationships between media, politics and public discourses about gender, violence and sexuality in India since 2000, the connections between the events of 2002 and the changing socio-political and media ownership context of India have become increasingly apparent. And the picture is particularly troubling.

Massive media deregulation, a lack of ethical frameworks for news, an endemic sound-bite culture, and the clogging of social media by trolls from the Hindu right have contributed to the normalisation of hate speech against Indian Muslims and anti-Hindutva academics across the world. Despite the rebuttal of false information and statistics about Gujarat’s development and growth, the repetition of false information by Modi’s PR machine has led, meanwhile, to some in the West suggesting that he is good for business and should be befriended by the West, whatever the accusations against him. It comes as no surprise that Modi’s election campaign is also the most presidential campaign anyone has ever waged in Indian politics to date.

It is often said that we should learn from history. Similarly, it is commonplace after horrific events to assert that if one had known all in advance, one would never have sat silent, been complicit, and allowed dreadful deeds to be done. In an attempt to look back and learn those lessons from past decades in the Indian state of Gujarat, and to look towards the future with some sense of the trajectory of Indian democracy, the upcoming panel will examine the media context of the country as well as evidence presented in a number of cases against the Gujarat government of 2002, its functionaries and the incumbent chief minister and BJP prime-ministerial candidate.

Bad Behavior has blocked 4314 access attempts in the last 7 days.