The meteoric rise of Arvind Kejriwal and his mercurial Aam Aadmi Party (AAP) has come to an abrupt, but not entirely unexpected, halt after less than 50 days as chief minister of the coalition in New Delhi state. After claiming that he would step down from office if his party’s public ombudsman legislation, the Jan Lokpal Bill, was not passed in the legislature, Kejriwal duly tendered his resignation when members of the Assembly prevented the tabling of the bill. The Lieutenant Governor Najeeb Jung, de jure head of Delhi, had recommended, on the advice of the Solicitor General of India, that the bill not be introduced on grounds that it would provoke conflicting constitutional jurisdictional claims between state and central governments. 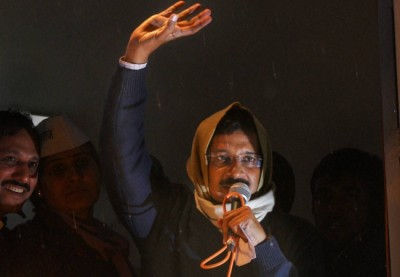 With both the Congress Party and the Bharatiya Janata Party (BJP) ostensibly opposing the introduction of the Jan Lokpal bill on this basis, it did not stand a chance of passage and was in the end both symbolically and literally in tatters, prompting the AAP figurehead to hand in his notice and call for fresh elections. For his part, Kejriwal claims that the opposition acted out of an impulse to protect their allies, following his daring move to issue a police complaint against petroleum minister M Veerappa Moily, former minister Murli Deora and Reliance Industries chief Mukesh Ambani for alleged collusion in the hike in prices of natural gas. As of 17 February, the New Delhi legislature remains in ‘suspended animation’ under President’s Rule as the Lieutenant Governor explores alternate governing arrangements.

Even in these seven short weeks, Kejriwal has been able to carve out a legacy based on the populist measures that he introduced, and this helps maintain his high approval ratings among the rank and file constituencies of Delhi’s teeming millions (auto rickshaw drivers are an interesting case in point). Never out of the headlines for long during its tenure, the AAP government courted controversy, censure and praise in equal measure. The nearly daily chaos notwithstanding, what is indisputable is that for such a short stint in power, the AAP has managed to push through a number of blockbuster reforms that have the effect of the reappropriating wealth that was thought to have been pilfered by corrupt individuals taking advantage of a deeply plutocratic system.

The decision to resign might also have been a strategic calculation on Kejriwal’s part to focus more on the national elections, the schedule for which should be announced by 15 March. As an upstart political entity, the AAP has been trying to drum up volunteer support and financial donations in a bid to nationalise its presence in the lead up to the polls. Despite support in the north, the AAP is hampered by the language barrier in reaching out to potential cadres and candidates in the south and east of India. With regional parties maintaining their strong bases, and the Congress party all but written off, look for the AAP to train its sights on the BJP, and its national leader Narendra Modi, on issues of corporate accountability and process transparency in relation to its own economic track record and vision.

Bad Behavior has blocked 1001 access attempts in the last 7 days.