Janel Smith contextualises anti-Western sentiment in Sri Lanka and its implications for proposed UNHRC resolutions to establish an international inquiry mechanism to investigate allegations of human rights violations by the government and military. Read Part One of this blog for a description of the US, UK and UN positions on such an inquiry mechanism.

The position of the Government of Sri Lanka (GOSL) toward Western ‘interference’ in Sri Lanka’s sovereign affairs is not an uncommon viewpoint in Sri Lanka. It often expresses itself in accusations of the illegitimacy of the West to critique Sri Lanka due to the ‘double standards’ of the West and its allies in their own international conduct and perception toward the right of other countries and the UN to tolerate external intervention into domestic accountability and security issues. Many Sri Lankans, for example, speak out against war crimes and violence committed in the final stages of the war but are critical of what they see as the West’s hypocrisy in having tacitly supported the GOSL’s ‘war on terrorism’ but calling for investigations into potential human rights abuses in the aftermath of the war, all while adopting a hard-line stance through their own wars on terror. 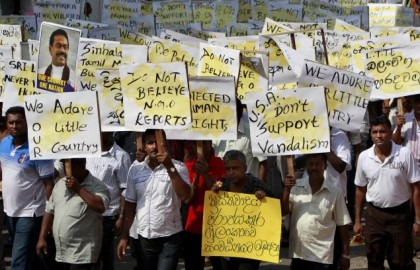 In this context Sri Lanka is painted as the ‘international scapegoat’ for the West as it is pointed out that similar or worse allegations have been made against Western powers that have engaged in conflicts in Libya, Iraq and Afghanistan but who have not been held up to the same international standards concerning their own conduct. Such allegations have been further propagated by the GOSL and its supporters, often in the form of Sinhalese Buddhist nationalists, who have long purported that Sri Lanka belongs first and foremost to Sinhalese Buddhism. This can be seen in the anti-interventionist protests that rose up in response to calls to investigate alleged war crimes associated with the end of the war at the nineteenth session of the UNHRC from 27 February to 23 March 2012. Posters were plastered around immigration counters at Sri Lanka’s Bandaranaike International Airport that read: “We are strongly against the hypocritical foreign intervention against the Sri Lankan Government” and “USA Please do not support terrorism”. Similarly, nationalist Sri Lankan groups called on Sri Lankans to boycott American goods like Coca Cola and Pepsi in a bid to ‘avenge’ America for supporting the UNHRC Resolution.

Indeed, the level of animosity felt by many Sri Lankans toward the ways in which the West has sought to involve itself in Sri Lankan affairs in the aftermath of the war can be seen in a December 2011 opinion-poll conducted by Lanka Monthly Digest of the views of Sri Lankans on the issue of international pressure for an investigation into allegation of human rights abuses. According to the research methodology, a random sample of Sri Lankan respondents between 18 and 55 years of age was selected, with an equal gender divide and covering Colombo and the provinces in equal proportions. The poll reports that “a staggering 97 per cent of people interviewed … say they are in favour of the Government’s response to allegations made by the UN panel and some Western nations.”

Perhaps more ominously for Western powers, the poll continues that 85 per cent of poll participants believe that the West practices double standards and that statements such as “The West very frequently publicises false statements”, “Western countries only act in their best interests”, and “some Western countries support terrorists” were amongst those frequently expressed during the nationwide survey. It must of course be acknowledged that the results of the poll can be accused of possible biases, reflecting ‘majority’ views of Sinhalese Sri Lankans, who comprise approximately 75 per cent of the population, and not reflecting the perspectives of ethnic minorities within the political dynamics of post-war Sri Lanka who may themselves seek to appeal to the UN. However, the results are indicative of the very real depths of animosity felt toward the West by many in the Sinhalese majority that suggests the improbability that any Western-led accountability and/or reconciliation mechanism will be viewed as legitimate and acceptable by Sri Lanka’s dominant population.

In addition, the results of the LMD poll also found that many of the respondents believe that Sri Lanka should seek the support of friendly nations such as China and Russia, who have veto powers as permanent members of the UN Security Council. This shift in support toward ‘illiberal’ powers in Sri Lanka can also be seen in events surrounding a 1May 2011 rally involving tens of thousands of Sri Lankans in Colombo in opposition to the UN’s release of its April 2011 Panel of Experts Report on accountability in Sri Lanka that found credible allegations of widespread violations of human rights and international humanitarian law in the final stages of the Sri Lankan war. At the rally a large banner was carried by the crowd that depicted Sri Lankan President Mahinda Rajapaksa alongside five other heads of state – those of China, Cuba, Libya, Russia and Venezuela – above a caption that read ‘For New World Order’, thereby, representing tacit support for leaders who are seen to stand up against the domination of Western nations and oppose international intervention into the sovereign affairs of states (Höglund and Orjuela, 2012).

There is no reason to believe that despite Sri Lanka’s current dependence on the West as its dominant export market that it will not seek to develop closer ties both economically and politically with China, Russia and possibly also Iran, particularly if facing possible economic sanctions that could be put in place by the West as part of a UNHRC resolution package against Sri Lanka in March. Although Sri Lanka is extremely unlikely to seek to disengage drastically from the West or engage in any radical action against it, it is not unfeasible to imagine that even tacit support for illiberal regimes would be most unwelcome, particularly as tensions with Russia rise over the possibility of military confrontations over the status of Crimea.

Where does this leave the West? Recently, the National Peace Council, an independent and non-partisan organisation that works toward reaching a negotiated political solution to the ethnic conflict in Sri Lanka, put forward the idea of a modified resolution that warrants serious consideration if the West does not want to ‘lose’ Sri Lanka. The National Peace Council has called on the international community and the GOSL to resolve their differences through a joint inquiry with a report-back mechanism to the UN where both the UN and the GOSL could act as partners in a domestic investigation process, which could be credible in the eyes of the UN and its stakeholders whilst respecting Sri Lanka’s sovereignty. There is certainly merit to this proposition as Sri Lanka “possesses individuals who have held very high positions both internationally and nationally in human rights investigations, and who could be acceptable to all stakeholders.”

A joint mechanism could also be established that seeks to bring together such individuals on all sides in a consultative mechanism to discuss an appropriate way forward to work toward reconciliation and address issues of accountability that would report back to the UN and GOSL and constitute a binding plan of action. Finally a more ‘neutral’ country, or grouping of countries seen by Sri Lanka as consisting of both ‘supportive’ and ‘critical’ or ‘biased’ countries, could be appointed to oversee and lead any international inquiry mechanism to limit perceptions of bias and accusations of Western neo-imperialism. If careful consideration is not given to the structure and administration of any proposed international investigation at the UNHRC session, Western powers may find that they have already ‘lost’ Sri Lanka.

Bad Behavior has blocked 676 access attempts in the last 7 days.