Ramani Jayasundere and Craig Valters analyse discrimination against women in Sri Lanka’s mediation boards and call for reforms to improve gender sensitivity. This post first appeared on the blog of the Justice and Security Research Programme at LSE’s Department of International Development.

‘Informal’ justice is increasingly on the international development agenda (for example, see here and here), based on the recognition that in many parts of the world, ‘formal’ justice systems are far from the first port of call for citizens with a grievance or dispute. It is estimated that as many as 80-90 per cent of disputes in the global South get dealt with by informal providers rather than state-led systems. Yet often assumptions are made about commonalities across any so-called informal system, for example in terms of the kind of justice they provide and the way in which they treat poor or marginalised groups. In reality, of course, ‘informal’ justice (others may say traditional, customary, non-state, hybrid or alternative justice as well) covers a huge range of systems – often it seems implied to mean ‘not the courts’ – each of which may have context-specific differences in how they function. 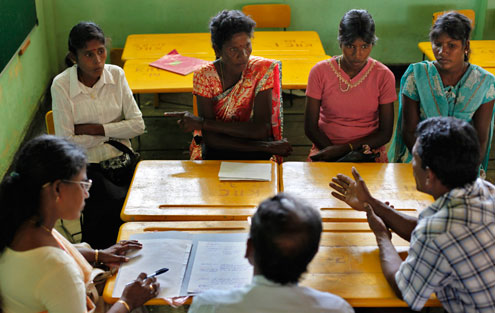 In our new study, we aim to give some nuance to these debates by looking in detail at the mediation boards in Sri Lanka and their treatment of women. Mediation boards are a dispute resolution system established by the state and conducted by local citizens. There are currently 324 mediation boards and over 7,000 mediators. This is not a minor system in Sri Lanka’s context, particularly given the relative inaccessibility of Sri Lanka’s court system; court cases in Sri Lanka can take many years and are often very expensive, considerably limiting access to the courts, especially for poor or socially excluded groups.

Based on the Mediation Boards Act of 1988 and subsequent amendments to it, women and men are legally obliged to take a wide range of civil and criminal disputes to these mechanisms, such as assault, family disputes (including domestic violence – primarily physical violence and sometimes sexual violence), land and property disputes and disputes arising from commercial transactions, and attempt voluntary settlements before the cases can be taken before a formal court of law. According to the ‘interest-based’ mediation process followed by mediation boards, mediators aim to get to the ‘root cause’ of the dispute and try to facilitate a mutually agreeable settlement that respects the interests of all disputing parties.

Despite its legal grounding and relationship with the state, this model has some characteristics often expected of informal justice systems. For example, mediators are drawn from the population of their local areas and generally already hold a respected or high position in society (often meaning they are elder men); the principles of mediation are based on negotiation, interests and compromise; community or family harmony is commonly emphasised as a reason for settlement; there is no professional legal representation; the mediators are volunteers; and the settlements reached in the mediation board are not legally binding and cannot be enforced in a court of law.

Yet our paper provides some nuance to a common generalisation: that such a system necessarily discriminates against women. In our research locations we observed male and female mediators acting in discriminatory ways. Yet we also often saw a genuine desire to facilitate outcomes which were perceived as beneficial for women in difficult situations, including those involving violence or considerable social stigma. This in part seems driven by the nature of the mediation system itself, such as the promotion (however unattainable) of ‘neutrality’ and ‘impartiality’ and linked to a basic understanding of gender equality (which was possibly encouraged through the limited training mediators receive). It’s clear that the nature of the system – its structure, rules, and procedures – matters for the way in which female disputants are treated.

However, this research also found more of what may be expected: there are considerable social barriers for many women to bring disputes to mediation, particularly where the dispute relates to sensitive issues of violence. Furthermore, power asymmetries between male and female disputants linked to broader social attitudes and gender-insensitive structures inevitably influence women’s treatment in mediation, as well as their own perceptions of what is a fair outcome. Importantly in the case of the mediation boards, the mediator has an essential role in how these power asymmetries are negotiated. Both male and female mediators’ desire to ‘settle’ cases (they often interpret settling a dispute as a job well done) means they may impose their own interpretation of gender equality and the position of women in society. Some of these interpretations have practical benefits to some women, but also may discriminate against others.

Our study also weighs up the benefits and potential pitfalls of reforming the mediation boards to make them more gender sensitive. On one hand, it is obvious that technical reforms have their limitations: gender inequality is less a reflection of technical procedures than of an underlying distribution of political, social and economic power.  This recognition can require a fundamental rethink in how the promotion of women’s equality can be achieved. Yet, we are aware this is not a simple transformation – and spoke to many people who felt that previous reforms had made a difference to how women experienced mediation. Therefore we do suggest further ‘technical reforms’ (training, quotas and gender sensitisation) to the Sri Lankan Ministry of Justice and their partners. We also suggest that the kinds of disputes that come to mediation are reconsidered – in particular domestic violence. Such changes are not a panacea for eliminating discrimination against women in the process (or more broadly), but mediation is a system that is by now heavily embedded in the Sri Lankan justice system –  and these reforms may lead to modest yet important changes for the many vulnerable women who use mediation.

Ramani Jayasundere is a Senior Technical Advisor on Law, Justice and Gender at The Asia Foundation.

Craig Valters was until recently a researcher on the JSRP and is now a Research Officer on the Development Progress Programme at the Overseas Development Institute.

Bad Behavior has blocked 1168 access attempts in the last 7 days.