In the context of Narendra Modi’s recent electoral victory, Moiz Tundawala questions the widespread belief that India’s Constitution can impose checks and balances on power. A version of this article first appeared on Kafila.

These observations of Babasaheb Ambedkar, made on 25 November 1949, one day before the Constitution was finally adopted after three years’ labour, should suffice for anyone who dismisses Narendra Modi sceptics as excessive scaremongers. As a second year law student in 2006-07, I couldn’t quite understand why our revered constitutional law teacher Professor M.P. Singh would keep reiterating these sentiments in class, something which I thought was so axiomatic it did not need emphasis. In the context of India’s election, I now realise the wisdom underlying those constant reminders, especially in a law school converted by the culture and priorities of its students into a factory churning out smart but unreflective products for the corporate sector. 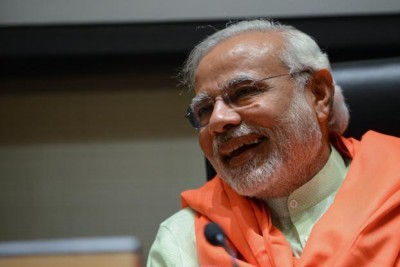 I think those of us who find Modi problematic, but still voted for him because of the lure of the promised economic miracle while at the same time consoling ourselves with the talk of sufficiently robust political institutions capable of surviving any onslaught, must listen to Ambedkar carefully. The Constitution is an artefact, a human creation, constantly needing ‘good people’ at the helm to work it out. If nothing else, resistance to Modi’s rise to power is at least resistance against the enthronement of ‘bad people’, who deep down have only harboured contempt for the Constitution as a foreign document.

The idea that the main function of institutions is to impose checks and balances on those who wield power is bunk liberal legalism. It was precisely against such a simplistic appreciation that Carl Schmitt wrote his most famous works in Weimar Germany, eventually leading to Hitler’s capture of power through democratic means. We would ignore the more important power generative capacity of institutions only at our own peril. Singing paeans to the rule of law ideal as an ‘unqualified human good’ should not make us believe that law can rule on its own. Ruling is an activity, and laws cannot act. At the end of the day, it is humans with their imperfections and corruptions who rule through law. Were an impartial law indeed the sovereign in India, at the very least, it would have managed to try Modi freely and fairly for his role in the Gujarat pogrom, and voters would have had the benefit of reading three judicial opinions before making a decision about his candidature.

Constitutions are sufficiently pliable for occupants to adapt them to their own epistemes and worldviews. It is widely known in public law scholarship that apart from checking power, laws and institutions are also deployed tactically as instruments for the realisation of any preferred telos. We have seen that the Hindu right in India has never found it difficult to translate its goals in secular language, while dealing with institutions under the Constitution.

Here are some examples that readily come to mind: Most notoriously, asking for votes in the name of Hindutva was successfully defended as legal, since Hindutva was a way of life and not a narrow religion. Secularism could be deployed as a substitute for Hindutva’s version of sarva dharma sambhava, resulting in the endorsement of saffronisation of school curricula in Aruna Roy v. Union of India. The upper-caste anti-affirmative action agenda is couched in the language of equal opportunities, non-discrimination and the ultimate goal of a casteless society. India’s imperialistic policies in Kashmir are vociferously defended in the name of preserving national unity, integrity and security. A uniform civil code is asked for, citing the imperatives of gender justice, without for a moment bothering to check with women’s movements if they are even interested in having one today.

Justifications such as external aggression, irreversible demographic changes and limited economic resources are manufactured in order to create a hysteria regarding alleged illegal Bangladeshi Muslim immigrants, shamelessly validated in Sarbananda Sonowal v. Union of India. That all these are constitutional perversions is beside the point. It is enough for me that such ideas have successfully been invoked from time to time. With Modi’s rise to power, if nothing else, this is likely to receive tremendous impetus. There are chances then that dissenting voices calling a fraud a fraud would either be muzzled, or drowned in the loud delirium from his devout bhakts.

It is ironic that someone clearly batting for strong governance is suddenly being projected as likely to respect the institutional limits within which he would be required to function. Modi has needed no invitation to distastefully flaunt his machismo in contrast with the weak effeminate ‘Maun Mohan Singh’. I still remember how his masculine, urbane national pride was scandalised by reports of Pakistani Prime Minister Nawaz Sharif allegedly calling Dr Singh a ‘dihati aurat’. Borrowing from a friend, I would like to offer the incumbent prime minister’s attitude toward women as a contrast—for good or for bad, Dr Singh has been comfortable working under a woman boss, and has brought up daughters who are accomplished in their respective fields. I believe that resistance to Modi is also in a way resistance against increasing masculanisation of Indian politics.

Let us not deceive ourselves and others about the factors resulting in Modi’s popularity. Overall voter preferences cannot be reduced to one or two core essentials in a country as radically diverse as India. But I am here concerned with those who strongly identify with the Modi phenomenon. Like it or not, their number is increasing at an alarming rate. This section voted either for the restoration of Hindu pride, or for rapid economic growth under a powerful leadership. For them, democracy is a nuisance, and institutions are unnecessary hurdles which only a strong man can overcome.

Liberal theory has failed miserably in making sense of the disenchantment produced by the ‘iron cage’ of bureaucratic rationality. Social disillusionment finds ready succour in modernised religion and charismatic authority everywhere in the world. India is no different. Insecure deracinated selves are always on the lookout for a messianic leader for deliverance, and Modi seems to have appeared as manna from heaven. To them, he gives the impression of brooking no moderation, either as Hindutva’s most famous living icon, or as the champion of the Gujarat model. We are seeing the thin line separating the Hindu right and liberal right blur in the figure of Modi. The wave in his favour does not augur well for us as a collective because waves are by their nature destructive.

I am not making a binary distinction between the self-righteous secularist and Modi the bigot. In our traditions, gods are not godly enough, and demons not demonic enough. What we are looking at is a spectrum, with Modi only being an extreme manifestation of all that is wrong with our polity, our society and our priorities. In many ways, his coming to power symbolises the completion of the project of normalising the exception, which began earlier in colonial modernity, and has been pursued by all post-colonial governments to varying degrees. More and more people from marginalised communities stand in mortal danger of becoming homo sacer to satisfy the collective conscience of the nation whenever necessary.

Having contextualised him appropriately, I would nevertheless say that the attempt on the part of many to offer a balanced picture of Modi is ridiculous. I see myself neither on the right, nor on the left, but at the same time cannot tolerate a docile neutrality to what is unacceptable. Why forcefully insert a nuance where unfortunately none exists? Why would India repeat the mistake of 1984, by rewarding a man who presided over a genocide with the seat of prime minister? If you question Modi on 2002, far from expressing remorse or showing an inclination to accept responsibility, he would ask you to hang him in public if proved guilty. How does one engage with someone with violence of the morbid variety so deeply ingrained in his psyche?

Finally, I do not myself regard secularism as a virtuous ideology. Practically speaking, it makes more sense for me to explain to Modi’s supporters why Hindutva is the most disastrous thing that has ever happened to Hinduism. Just as the Grand Inquisitor imprisoned Jesus for hindering the organised church in Dostoyevsky’s The Brothers Karamazov, I believe Hindutva would have no use for Ram if he were ever to reappear.

Those who do not tire throwing numbers at us to extoll the virtues of Modinomics, and critics who retort with more numbers appear to be taking Galileo Galilei far too seriously – “The book of nature is written in the language of mathematics” – as though an economics with global standards ought to be the sole determinant for a polity. Why not simply use gross domestic product and human development indices to decide governments? A backward emotive multitude is a liability for a nation state which aspires to superpower status in the immediate future. Who cares about human dignity?

Is it too much to ask for a polity to take Gandhi’s talisman seriously? “Whenever you are in doubt, or when the self becomes too much with you, apply the following test. Recall the face of the poorest and the weakest man whom you may have seen, and ask yourself, if the step you contemplate is going to be of any use to him. Will he gain anything by it? Will it restore him to a control over his own life and destiny? In other words, will it lead to swaraj for the hungry and spiritually starving millions? Then you will find your doubts and yourself melt away.”

For our times, we can substitute ‘poorest and weakest man’ with the hypothetical Pasmanda Muslim woman with a disability and an alternative sexual orientation living in a village of Bihar. Rather than selling our votes to the highest bidder in rational self-interest, I wish for a day when we give it to someone who stands for a common good, which all of us can share. But for the moment, I can only pray that India does not lose to Modi.

Bad Behavior has blocked 1031 access attempts in the last 7 days.