On 14 March, the second Economic Form for India at LSE took place in central London. Megha Harish draws out some of the most contentious debates of the day, namely around censorship, the freedom of consumption and the rights of women.

As the new statue of Mahatma Gandhi was unveiled in Westminster, a few hops skips and jumps away, the second edition of EFIL got off to a roaring start.

The Economic Form for India at LSE 2015 was a full day of discussion and debate. Organised by the students of the LSESU India Society, it is the UK’s foremost student conference focused on Indian issues. As a Liberal Arts student from Bangalore as soon as I found out about the event, I had to be there. Despite now studying at King’s College London, fraternising with a rival university was more than worth it for this.

EFIL opened with a video interview with Jayant Sinha, Minister of State for Finance with CNBC’s Shereen Bhan, immediately followed by a panel discussion of finance, economics and investment. While both the finance and entrepreneurship panels were fantastic, in this post I’d like to focus on the politics and media panels and the obvious similarities and stark contrasts between them.

The politics panel, moderated by Dr Mukulika Banerjee (LSE), comprised of two representatives of the BJP – Shaina NC party spokesperson and a ‘strong advocate for women’s rights’ and Piyush Goel, Minister of State with an Independent Charge for Power, Coal and Energy. It also featured Raghav Chadha, youngest spokesperson of the Aam Aadmi Party. The panel began by addressing the Modi government, its successes and challenges over the past 10 months. This was followed by a discussion on internal democracy and consensus within parties, the importance of a robust opposition and conversation around the controversial Land Acquisition Bill.

Once Minster Piyush Goel was able to join, via video link, the conference temporarily veered in the direction of coal block auctions, renewable energy and increased energy production. However, at the open Q&A session it was inevitable that recent headline news would come up. The two big topics of the day were the ban on beef in Maharashtra and India’s Daughter, the BBC documentary. Multiple questions were asked about censorship, freedom of speech and freedom of consumption.

Unrestricted eating is not an explicit constitutional right, probably because no one ever thought it would come under fire, and the defense of its violation stood on shaky grounds. Shaina NC hails from Maharashtra, the state in question, and was quick to explain the sanctity of cows (as though she were addressing a western elementary school audience who weren’t aware of the religious significance of cows in India). A comparison was then made with horsemeat being banned or frowned upon in the UK, US and Australia. A valid comparison? I don’t think so. Horsemeat is not a commonly consumed in the above countries, where it has only been consumed in times of war and severe scarcity and the 2013 outcry was linked to horsemeat being sold labeled as other meats, unlike beef which is commonly consumed by most members outside the Hindu population and some within it as well.

When India’s Daughter came up, the complaints about it ranged from the methods of sourcing permits for the interviews, giving perpetrators of such crimes a platform to speak, to respecting the victim and Indian culture. Not once was it brought up that the case was still sub judice and while some of the other points may have been valid, the fact that such a popular media phenomena could bias the judicial process remains the only real legal ground on which to ban it.

“The journalist interviewed the prisoners under a false pretext and sensationalised it and made it sound as if India is unsafe, not the India we see.” When the Minister made this statement, I heard a few women around me whisper in exasperation, “But it is unsafe!” Being unable to accept the problem isn’t getting us any closer to finding a solution. And while the documentary may have been hyped, as most such big media projects are, it does not willfully portray India in a bad light, it only tells a story and exposes some mindsets that very much exist (not just in India).

The loudest uproar however, came after Dr. Banerjee was told that, as a feminist, she could not speak on behalf of all Indian women.

MB: “I speak on behalf of a long fought movement, the Indian feminist movement.”

PG: “Yes madam, but this is not about the feminists. What about Indian mothers and daughters?”

The shock from the audience at this statement was truly heartening.

This blatant dismissal of the feminist label and cause was appalling. Having lived in the U.K. for close to two years now and working in Parliament’s Prevention of Violence Against Women and Girls shadow ministry, I had all but forgotten that it was possible for people in positions of authority such as this to disassociate themselves from the feminist movement. The concerns of mothers and daughtersare the concerns of the feminist movement. Making a start with cultural change, responsible education on consent, breaking down taboos to address problematic mindsets, bodily autonomy and basic rights to education, healthcare, speech and life are not out of the way, esoteric concerns. They are the concerns of every woman, and just as much should be of every man.

In conjunction with the India’s Daughter documentary, women’s rights wasn’t the only area of concern. Censorship was another focus. The Honourable Minster compared the rape to 9/11, and as if that comparison wasn’t inconsistent enough, continued to analogise between the media responses to the issues. He spoke about the American media’s respect and restraint in coverage of 9/11, how only the one ‘iconic’ image was shown on all news channels and publications, how the media did not broadcast gory images of the victims and the destruction. He was then asked if he advocates self-censorship of the media and could not respond. To hold up 9/11 as a responsibly handled media event undermines the covert operations that followed it and the massive impact it has had in shaping American foreign policy. Some things are better in the open.

The minister was obviously making assumptions about India’s Daughter before having seen it, because it does not contain any explicit images of the victim. It does not spread or incite hatred, it just brings to the fore an issue that desperately needs to be addressed.  He also brought up the injustice of her name being used, while her name was used with the consent of her parents.

Many more questions were asked, “Would an Indian journalist have been allowed to do this in the UK?” Probably not. “Doesn’t banning it make the viewership grow?” It definitely does, but what was most worrying was the fact the BJP representatives, taking the party line, seemed not to be cognisant at all of how unjustified their censorship was and unable to adequately defend it.

On the other extreme was the media panel with director Zoya Akhtar. In conversation with Dr. Daya Thussu, she handled issues across the board with sensitivity and conviction. There is some freedom that comes from not having to speak from within the shackles of party politics, but it still made a refreshing contrast.

A fantastic question was raised by Monique Mehra, in the audience, with regards to the portrayal of differently abled characters in films. She asked why, she, as an actor in a wheelchair did not feel like she would be able to play the role of a character in a wheelchair. Why able-bodied actors were cast for every role, disenfranchising less conventional actors. Zoya said that while she was unable to speak for other filmmakers, she had never found herself in that situation before, but now that it had been mentioned, would consider it for the future. She was polite and encouraging.

She spoke about censorship of documentaries and films and the censor board’s rules on what qualifies as suitable grounds to ban a production. “You can’t say the word lesbian in Indian films. I don’t believe in censorship.” Yash Chopra was mentioned as a director who may not have explicitly associated himself with feminism in the 80s, but displayed a consistent respect for his female characters and cast. Zoya spoke about women filmmakers, being inspired by Mira Nair and how the industry is slowly metamorphosing into a more accepting, equal workspace. These are the kind of views one would hope for from our leaders, that they stand firmly as advocates for women, for freedom of sexuality, against sexism, homophobia and ableism.

EFIL 2015 was a day of thought-provoking discussion and debate and left me feeling an odd combination of frustration and optimism. We are not yet all the way there, but maybe someday soon, the soul of this nation, long suppressed, will finally be free to find utterance.

Cricket and the rise of modern India 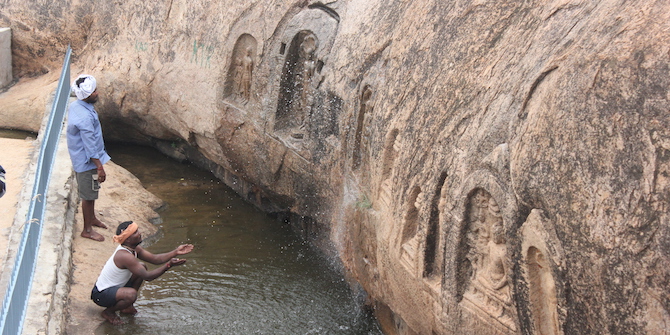