Contrary to the Left Alliance’s campaign pledge, it is unlikely that the new government will deliver a new level of political stability to Nepal. There are four reasons why, writes Julia Strasheim.

After almost three months in political limbo, Nepalis watched on 15 February 2018 as their 26th prime minister in 28 years was sworn into office. Owing to the Left Alliance’s stunning victory in the legislative elections held on 26 November and 7 December 2017, Khadga Prasad Oli returned to the office he briefly occupied once before in 2015 and 2016. The Left Alliance is a new political movement formed by Nepal’s two largest communist parties: Oli’s United Marxist-Leninists (UML) and the Maoists, a former rebel group led by Pushpa Kamal Dahal or “Prachanda”. Both parties captured almost two thirds of parliamentary seats in the elections, and they agreed to formally merge into a single communist party on 19 February.

In the lead up to the vote, the Nepali Congress (NC) – the main political opponent of the Left Alliance – had tried to stoke fears among the electorate by accusing the alliance of a plan to impose a communist totalitarian regime. But voters refused to buy this allegation, knowing that the UML and the Maoists are communists by name but not by trade. Voters also know that the biggest threat to Nepal’s democracy is not one political movement, but the chronic instability and everlasting game of thrones between power-hungry men of various political parties. Their power struggles have toppled every single government since 1990: Most governments were in power for less than a year, making far-reaching political and economic reforms impossible.

But contrary to the Left Alliance’s campaign pledge, it is unlikely that the new government will deliver a new level of political stability to Nepal. Here are four reasons why:

First, Nepal’s communist movement has a notorious history of splits and mergers. A unified communist party has existed once before: it was formed in 1949 by Pushpa Lal Shrestha. But over decades, it split into various factions. Splinter groups also broke away from the Maoist party itself as recently as 2012, 2014, and 2015. This factionalism won’t stop now. Dahal and Oli – perhaps the two most ambitious, charismatic, and ego-centric Nepali politicians – have been bitter rivals in the past. They tried to briefly govern together in 2015 and 2016, but the Maoists withdrew from the coalition. They accused Oli of failing to implement a “gentlemen’s agreement” and hand over the post of prime minister to Dahal. When UML and the Maoists agreed to merge into one party, Dahal said that a general convention of the new party will decide whether the mechanism of taking turns for the prime minister’s office will be implemented again. This indicates that Dahal has no interest whatsoever in leaving the spotlight to Oli.

Second, the new government will fall short on bringing stability because the Left Alliance was not formed based on similar policy preferences. In fact, the UML and the Maoists until recently held starkly different policy positions regarding Nepal’s most pressing security issue, the Madhesi conflict in the southern Terai plains. Madhesis are one of several minority groups in Nepal who have long protested the various governments in Kathmandu for failing to mitigate their profound discrimination. The situation escalated in the fall of 2015 when a new constitution was promulgated that installed a federal political system in Nepal. Madhesis held that the system as stipulated by the constitution would further marginalise them, since federal boundaries were drawn in such a way that Madhesis would become a minority in all provinces. What they demanded instead was an identity-based version of federalism and a Madhes province. Until recently, this was a policy the Maoists supported, having often played the ethnic card in politics and having (successfully) fought for better representation of minorities. The UML, on the other hand, is a stark opponent not only of an identity-federal model but of ethnic politics as such. It is likely that this policy divide will re-emerge in future. 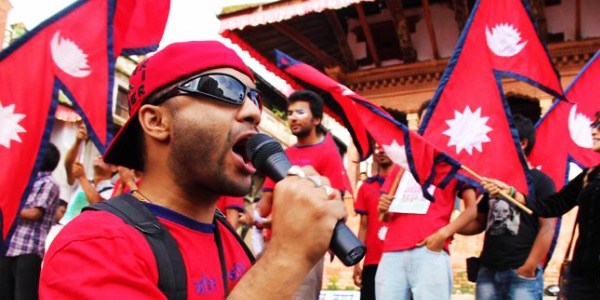 Protesters at a mass rally to expedite the constitution in 2011. Photo credit: Samsujata, CC BY 3.0.

Third, also Nepal’s two-year old constitution is of no avail to political stability, as demonstrated by the recent political limbo that has followed the 2017 legislative elections. The new government took almost three months to form, amongst other things, because the National Assembly – the upper house in the bicameral legislature – was to be indirectly elected by the members of the provincial assemblies. But UML, NC and the Maoists could not agree upon the mode of election. This could have been avoided, had the three parties – who were the main engineers of the constitution – agreed on procedural issues while drafting the constitution and not left room for such ambiguities. The parties seem unwilling to yet take a clear stand on constitutional issues, likely also because future legal limbos could play out to their advantage.

Finally, Nepal’s neighbours won’t make Oli’s job easy. The Left Alliance won the election on a strongly nationalist and anti-India platform, presenting itself as the only political force that can stand up to India’s interfering in Nepal’s internal affairs. Many Nepalis are wary of India’s meddling. Most recently, when Madhesi activists set up a blockade of the Nepal–India border in the fall of 2015 to protest the constitution, Oli openly accused India of supporting the blockade. This greatly bolstered his nationalist credentials in the view of the Nepalese electorate. Under Oli’s 2015-2016 government, China then began to take on a more prominent role as a foreign donor in Nepal. The Left Alliance’s victory is thus also seen as a foreign policy victory for China in Kathmandu and Beijing. But alienating India – culturally and geographically the more natural political partner for Nepal – cannot be Oli’s winning strategy in the long run. His difficult task will be not only to carefully balance his government’s foreign policy in dealing with the two regional powers, but to also bring this policy in line with the expectations of his voters.

Julia Strasheim is a researcher at the Federal-Chancellor-Helmut-Schmidt-Foundation in Hamburg, Germany. Previously, she was a research fellow at the GIGA German Institute of Global and Area Studies and a PhD candidate at the University of Heidelberg. Her research covers peace, conflict, and security issues in Asia. She tweets @juliastrasheim. 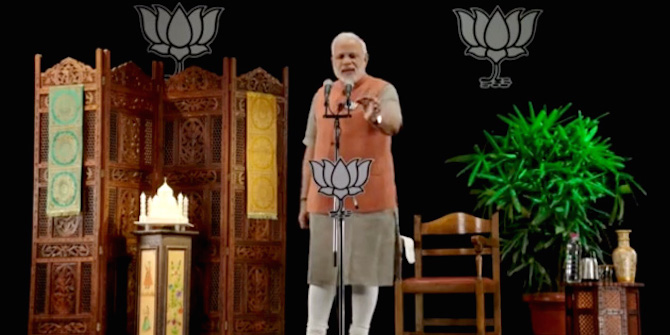 Bad Behavior has blocked 870 access attempts in the last 7 days.