Can mass media information campaigns by the tax authorities improve personal income tax filing rates in a developing country as Pakistan? Does message content that includes neutral information provision or moral persuasion induce more taxpayer compliance? Nudging taxpayers has emerged as a reliable strategy in enhancing tax compliance in developed economies (Thaler and Sunstein, 2003). However, the evidence on its effectiveness in countries that exhibit low voluntary tax compliance rates and weak tax enforcement is inconclusive (Fjeldstad et al., 2012; Mascagni, 2017; Slemrod, 2018; Alm, 2019). Moreover, it remains unclear whether tax authorities should solely rely on carefully planned randomized experiments or wide-scope, national-level interventions could be added to their behavioural solutions toolkit. This is an important question given the limited capacity of tax authorities in developing economies to carry out randomized experiments and the scarcity of resources needed to implement extensive tax enforcement interventions.

In recent years, there has been a rise in the number of tax administrations around the world employing behavioural strategies to enhance tax compliance. Information provided by the tax authority can have a positive and significant impact on the likelihood of filing a tax return as well as the accuracy of income tax reporting by individuals (Alm et al., 2010; Kosonen and Ropponen, 2015). Since 2012 the Federal Bureau of Revenue (FBR) has introduced non-media information campaigns with a nationwide scope that include public disclosure of individual tax remittance and a top 100 taxpayers honours-and-rewards program. Slemrod et al. (2018) find that the public disclosure campaign led to an increase in tax remittance while the social recognition campaign was even more effective in inducing higher tax remittance.

The mass media campaigns reached only a fraction of the survey participants, thereby introducing a natural experiment setting.  Approximately one-third of all survey participants were exposed to the campaign, generating a large control group (for more, see Cyan et al. 2016, 2017). We used this source of cross-sectional variation to identify the causal treatment effect on income tax filing.

The contribution of this research is twofold. First, it offers the first test of a behavioural intervention by a tax authority on a subjective measure of tax compliance; income tax filing from survey data. Second, it increases our limited understanding of how different message content can influence tax compliance in a developing economy characterized by low voluntary tax compliance and weak tax enforcement.

From a policy perspective, given Pakistan’s perennial low tax revenue-to-GDP ratio, it is imperative for the country’s development to generate more tax revenue. This can be achieved by increasing the active income tax filer population of 0.98 million taxpayers (out of 3.6 million registered taxpayers and an estimated 5.7 million eligible tax filers; IMF, 2016). Waseem (2019) estimates that seventy per cent of low- and middle-income self-employed do not file income tax returns although only one per cent of low-income wage-earners do not file.

The TV ads represented the moral suasion nudge by the FBR aiming to highlight the personal gratification gain from filing a tax return. The TV ads displayed tax compliant professionals attesting to the simplicity and the importance of the tax filing process. The FBR employed three newspaper ads containing different neutral information nudges. A tax filing eligibility nudge highlighted the eligibility criteria for filing an income tax return, whereas another one emphasised the tax filing deadline. Finally, the tax filing benefits nudge pointed to the benefits of income tax filing.

Our findings indicate that mass media campaigns did indeed improve personal income tax filing in Pakistan. As Table 1 and Figure 1 show, the newspaper information ads considered had a statistically and economically significant effect on filing while the effect of the TV moral suasion ad was not statistically significant. Considering the three newspaper ads separately, only the one that focused on tax eligibility was found to have had a significant effect, probably because it conveyed genuinely relevant information (e.g. tax deadline often extended). 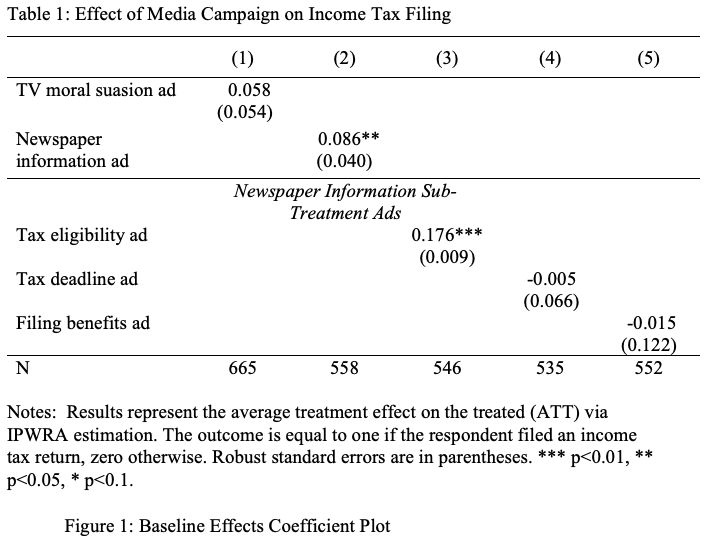 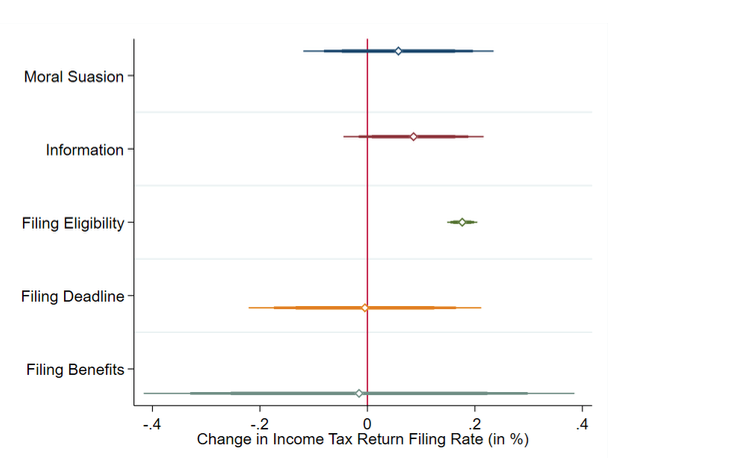 The results of the heterogeneity analysis by employment status reported in Table 2 and Figure 2 indicate that the moral suasion ad did improve tax filing among the self-employed. A large and significant increase in tax filing rates is reported for salaried workers and pensioners by the overall newspaper ads effect. Considering the newspaper ads separately verified that only the tax eligibility ad had a positive effect on filing, and this held for both employment status groups. Unexpectedly, the tax deadline information ad was found to have had a negative effect on tax filing for self-employed workers. 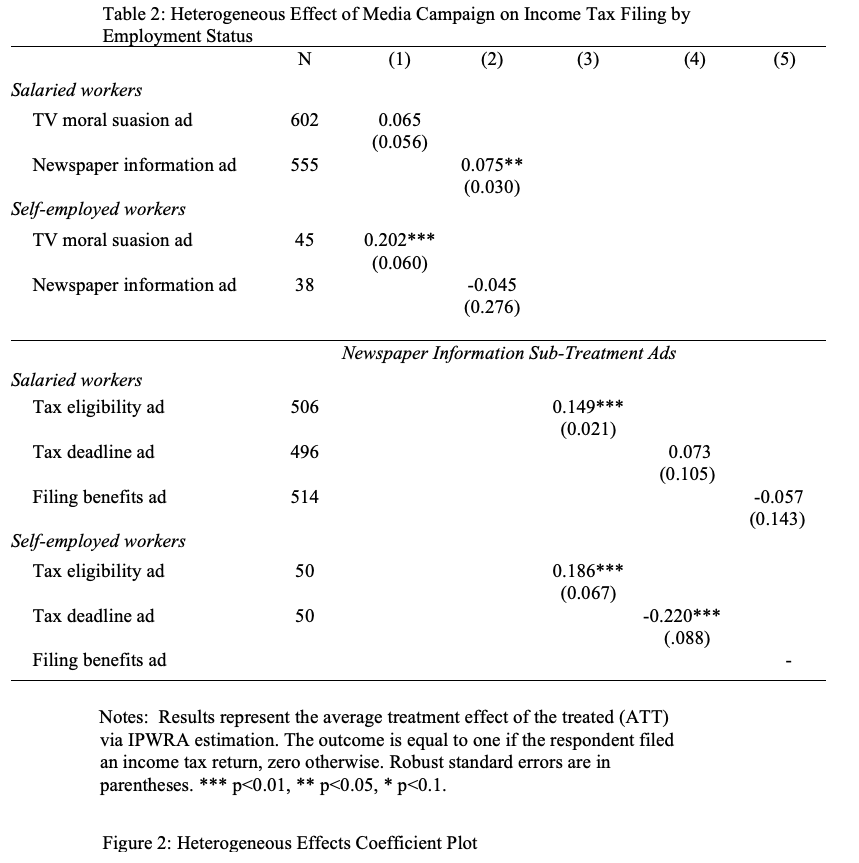 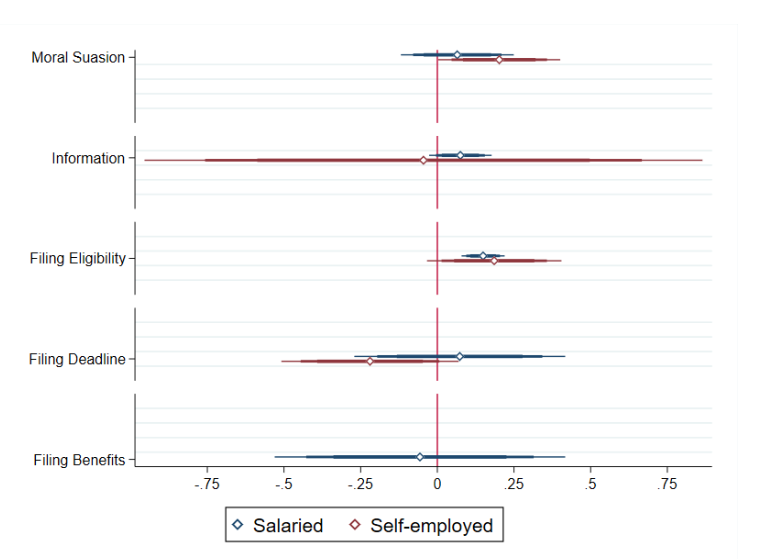 From a policy perspective, our results illustrate whether low-cost, wide-scope behavioural strategies may be added to the tax administration’s toolkit of affecting taxpayer behaviour to increase overall tax compliance. A careful design would favour the use of moral suasion campaigns to encourage tax filing by specific employment groups, notably the self-employed. Moreover, neutral information campaigns should place emphasis on transmitting tangible information about the tax filing process (tax eligibility, tax filing deadline) as opposed to re-framing commonplace information (presenting penalties as compliance benefits).

This article gives the views of the author, and not the position of the South Asia @ LSE blog, nor of the London School of Economics. Featured image: White and Black Desk Calculator. Credit: Pixabay.

Antonios M. Koumpias is an Assistant Professor of Economics at the University of Michigan-Dearborn and a Research Affiliate at the Population Studies Center of the Institute for Social Research at the University of Michigan. He is an applied microeconomist with a research focus on tax compliance. His research has been published in journals such as the Journal of Asian Economics, the Journal of Experimental and Behavioral Economics and Contemporary Economic Policy.

Jorge Martinez-Vazquez is Jorge Martinez-Vazquez is Regents Professor of Economics and Director of the Cluster of Public Finance Centers at the Andrew Young School, Georgia State University. He has published over 20 books and numerous articles in academic journals, such as Econometrica, the Journal of Political Economy and the Review of Economics and Statistics. He has advised federal and state agencies in the US and over 90 countries, and is the recipient of numerous prizes and awards. 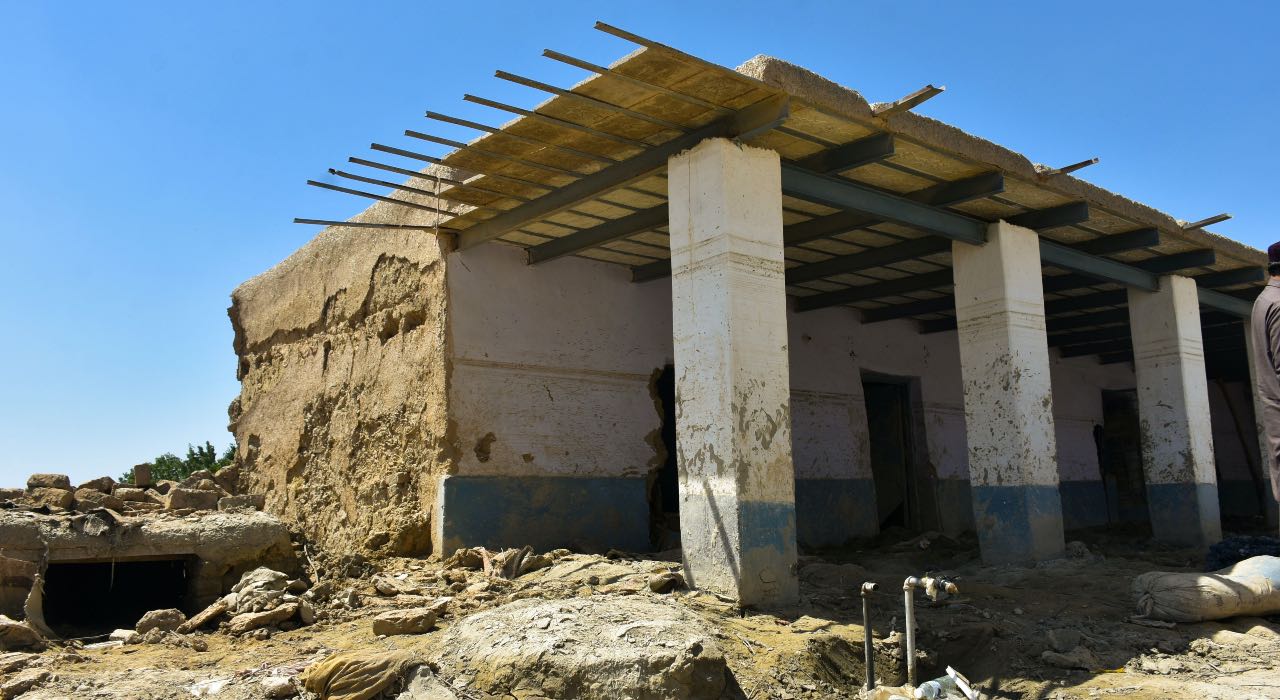 Climate Justice and Accountability for Pakistan 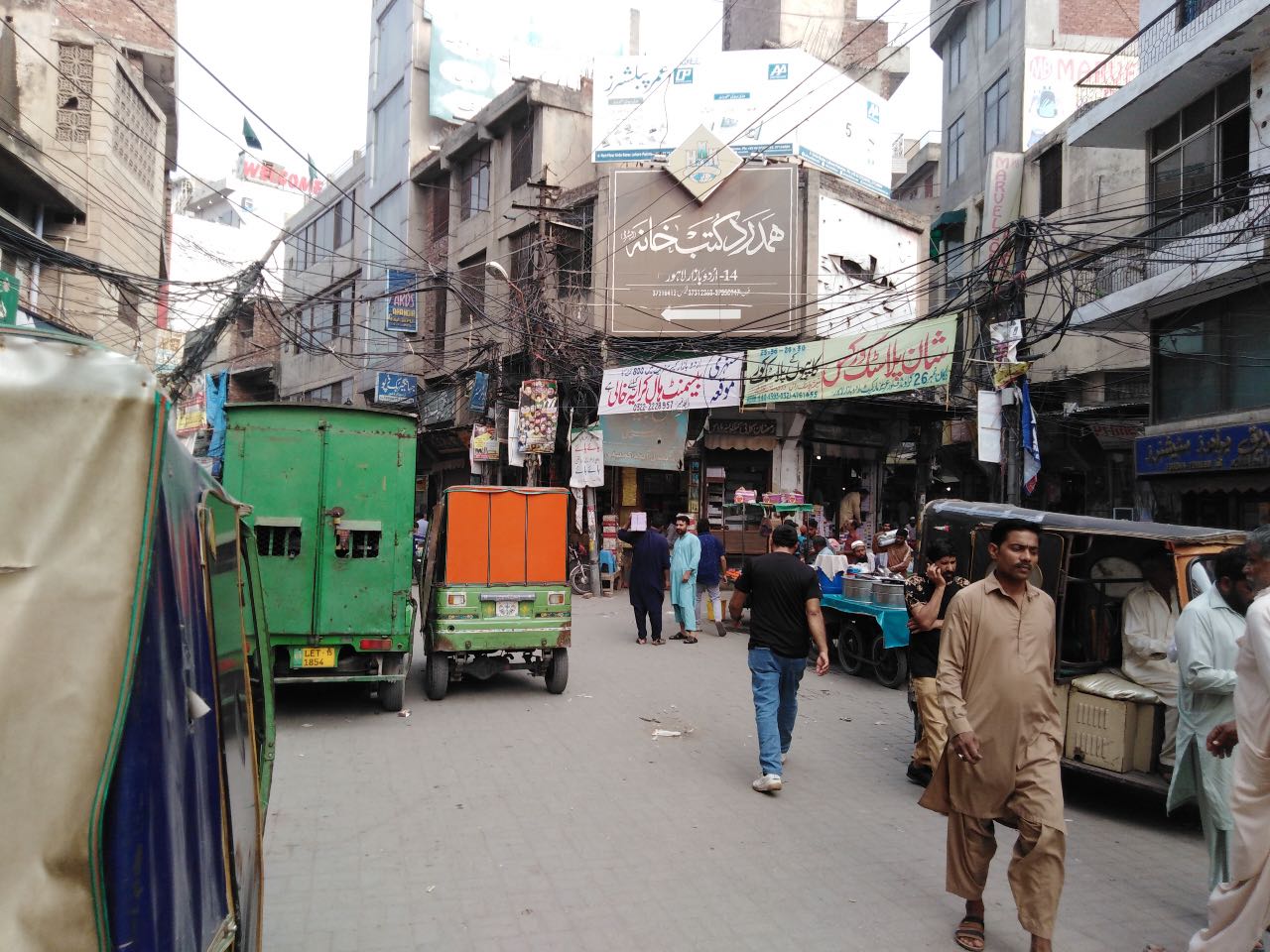 Bad Behavior has blocked 3649 access attempts in the last 7 days.