Youngeun Koo, a Research Coordinator at Reprezent, recently took Qualitative Research Methods course at the LSE Summer School. She writes about her experience and the work of Reprezent.

What comes into your mind first when you see the words ‘young people’? Is it something positive? Or negative?

Reprezent is a youth engagement social enterprise based in South London.  It was set up in 2002 by a group of friends who aspired to challenge the stigma attached to young people and give them skills and confidence.

In 2004, we launched Radio Peckham to support young people in the local community. 2008 was particularly important to Reprezent, as there was a sharp increase in youth knife crime in that year and mounting tension across society as a whole. Sensationalisation of this issue by the mainstream media only fuelled prejudice against young people. Under the conviction that only open dialogue between young people and statutory bodies could unearth real causes of the problem, we ran a broadcast project called ‘Peace on the Streets’ across South London in partnership with the Choice FM. Young people affected by the issue were trained in radio presentation, debate and DJing and participated in a series of discussions with the police and local authorities at our station. Radio was proven to be an effective means to capture young people’s attention and a safe and engaging outlet for them to express their views. Our successful engagement with young people and the

statutory bodies was featured in a number of media outlets including BBC Newsnight, ITV London Tonight, The Guardian and South London Press.  Radio Peckham later changed to Reprezent 107.3FM, after acquiring a full-time five year FM licence from Ofcom in 2010.

Our aim and business model

Our aim is to upskill young people and give them a voice so they can better represent themselves in society and Reprezent 107.3FM is at the heart of this. It is London’s only youth-led radio station and all shows are designed and developed by young people who have completed our training. This ensures the content of the shows mirrors the interests of young Londoners. The doubling up of listenership last year proves the value of this model to our target audience. The station gives us direct access to large groups of young people in the capital who are otherwise hard to reach.

Optimising this unique access to young people, we offer broadcast, consultation and training services to local authorities, government and companies and act as a bridge between young people and our clients. Just as Freer Spreckley (1981) defines social enterprise as a business where ‘labour hires capital with the emphasis on social, environmental and financial benefit’**, all profits we create from these services go back to the station to support more young people with limited life chances. Last year, our business model enabled us to provide free training to 326 young people and on-going tailored support to 79 presenters and broadcast assistants at the station.

One of our recent projects was commissioned by Southwark Council in May 2013 who wanted to understand what young people in Southwark thought about their social housing policies and proposed reforms. The project comprised two themed shows, vox pops, focus groups and an online survey in order to reach and consult with diverse groups of young people. As part of the project, the Leader of Southwark Council, Peter John, also joined us at the station and had an involved dialogue with young people. (You can listen to the show again here: https://soundcloud.com/reprezent-radio/reprezent-the-future-of-1 ) Contrary to all expectations that young people might not be interested in the topic, over 200 young people from Southwark were involved in the project, expressing their views and concerns on social housing in their local area. The findings and recommendations were presented to the Council and a follow-up meeting between young people and the Leader is planned on the 11th October. The Leader will feed back to young people on the outcomes of the policy change and the effect young people had on the decision making process. This conversation will broadcast live from Reprezent 107.3FM. 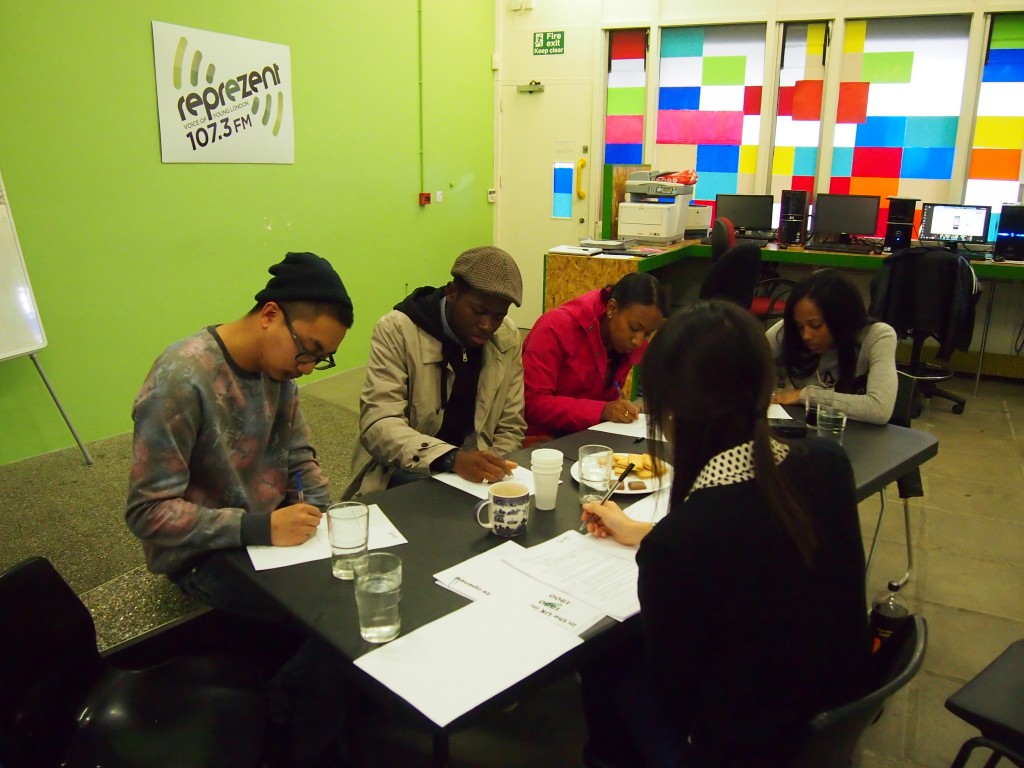 Hence, despite what seems to be a general assumption by wider society, young people do not necessarily seem to be apathetic about social and political issues. Rather, the lack of their voice in society is derived from limited platforms where young people can confidently and comfortably express their opinions. This is precisely in line with James Sloam’s argument (2013) that young people’s lack of interest in electoral politics does not necessarily mean their indifference to politics as a whole***. He claims that young people today instead choose alternative forms to participate in politics and these ‘horizontal forms’ of engagement can be easily witnessed in social networking sites like Twitter and blogs****. However, as Sloam notes, with the ageing of the UK populations and the decrease in participation in electoral politics among young people, it is less likely that young people’s interests will be reflected in the actual decision-making process. And this is what we are principally concerned with and what we would like to challenge.  In order to more actively inform policy makers and represent young people’s voice in society, we have been developing an innovative consultation model which gathers young people’s views using radio and social media.

The course at LSE

This was the core reason why I joined the Summer School at LSE this August. I work as a Research Coordinator at Reprezent and the Qualitative Research Methods course I took has helped me further develop my understanding of different analysis tools as well as ways of disseminating research findings. In particular, it was fascinating to see how research could be broadened by using non-conventional tools such as cyberspace, photos and videos. Upon my return to work, I decided to experiment with research tools and have since combined one of our radio shows with a research project. In September, our monthly debate show, The Voice of Young London, explored the theme of health and well-being (You can listen again to the show here: https://soundcloud.com/reprezent-radio/the-voice-of-young-london). In parallel with the show, I ran a study to map out all the elements in the local area that young people thought affected their well-being. The interim findings were fed back to the live show where our presenters and guests engaged in a thought-provoking discussion on how much impact their neighbourhood had on them. I am currently in the process of bringing all the data from the study and the show together and am very excited to see what the findings will be. The results, which we also plan to present to local authorities, will be available on our website soon.

This is a very exciting development for Reprezent. Through this model, we hope young people will be more positively represented and more young people’s voices listened to. It seems that all too often we pay lip service to the importance of young people and their opinions but in reality often fail to empower them.

*** Sloam, J. (2013) ‘Young people are less likely to vote than older citizens, but they are also more diverse in how they choose to participate in politics’. LSE European Politics and Policy Blog [web log]. Available at https://blogs.lse.ac.uk/europpblog/2013/07/19/young-people-are-less-likely-to-vote-than-older-citizens-but-they-are-also-more-diverse-in-how-they-choose-to-participate-in-politics/ [Accessed in Aug 2013]

You could walk into a puddle or…

A very short word on depression