Decades of punitive crime policies, frequently linked with the ‘war on drugs’, have given the US the highest incarceration rate in the world, with African Americans vastly overrepresented in the prison population. Tim Newburn argues, however, that there may be some small cause for optimism. In a recent speech, the US Attorney-General, Eric Holder, announced changes to the way offenders would be punished, including a desire to reduce the prison population. In addition to Holder’s speech,, the declining use of the death penalty, falling state-level prison populations, and gradual changes to drugs laws, appear to indicate that the politics of punishment in America are beginning to shift.

Three weeks ago, US Attorney-General, Eric Holder, announced potentially significant changes to the ways in which the American federal government punishes offenders. In his speech in which he proposed a significant reduction in the use of mandatory minimum sentences against low-level drug offenders, Holder took aim at US penal policy describing levels of imprisonment in the US as both ‘ineffective’ and ‘unsustainable’. To understand the Attorney General’s observation one must appreciate the scale of what has been happening in the US in the last 30 years and why some commentators have come to refer to it as an experiment in ‘mass’ incarceration.

In 1980 the American prison population totalled just over half a million. Adding probation and parole the total ‘correctional population’ was 1.8 million – relatively high by international standards but not off the scale. As shown in Figure 1, by 2009 the prison population had swollen to almost 2.3 million and the total number under correctional control was nearly 7.25 million (a greater ‘population’ than Massachusetts or Arizona). 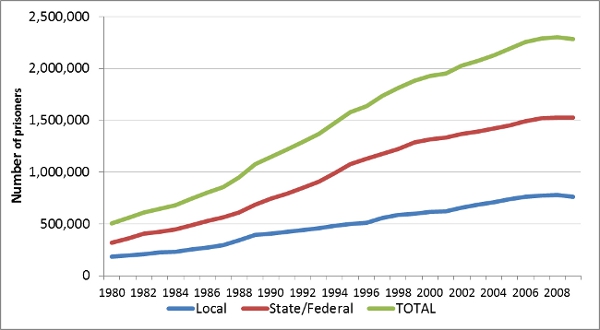 Looked at comparatively, the scale of what has been happening in the United States is quite unlike any other developed country. Despite close to a doubling of the prison population in the UK in recent decades, and very sizeable increases in incarceration in other Western European nations, none of them begins to compare with the rate at which America imprisons its citizens, as shown in Figure 2 below. 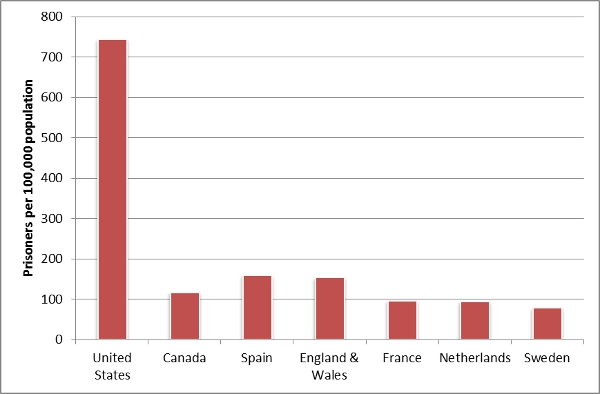 America’s unparalleled incarceration rate led the US Bureau of Justice to estimate that if left unchanged 6.6% of all American citizens born in 2001 would face imprisonment in their lifetime. Frightening though such a figure is it masks the extraordinarily unequal distribution of risk. In reality, while white males born in the US in 2001 would have a 1 in 17 chance of imprisonment, the odds lowered to 1 in 6 for Hispanic males and to an astonishing 1 in 3 for black males.

The roots of America’s punitive turn and of the colossal racial disparities at its heart are complex, but the ‘war on drugs’, announced by President Nixon in 1971 and which has raged for much of the period since, must occupy a central role in any explanation. As Michelle Alexander documents so forcefully, over a period of three decades the war on drugs in effect became a war on poor urban communities of colour. On top of very significant increased likelihood of arrest for drug law violations, young black males in the US also found themselves the target of a succession of punitive mandatory minimum sentencing policies, particularly applying to drug offences. Prior to the introduction of Federal mandatory minimums average sentences for black offenders were 11% higher than for white offenders. Since 1986, federal drug sentences have been nearly 50% higher for black offenders. The end result, as Alexander so graphically puts it, is that there are now more African American men in prison, jail, on probation or parole, than were enslaved in 1850 prior to the Civil War. 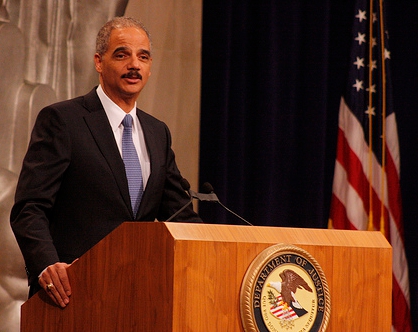 All of which brings us back to the Attorney-General’s statement. He announced a shift in sentencing policy, a desire to reduce the prison population, and to significantly increase the use of alternatives to imprisonment. In so doing he was outspokenly critical of current penal policy, observing that ‘too many Americans go to too many prisons for far too long and for no truly good law enforcement reason’.

Two things are noteworthy about Holder’s speech. The first is that the announcement was made at all. Most obviously it goes against the decades-long punitive drift of penal policy in the US (and elsewhere). Politicians – Democrat and Republican – have generally sought to parade their ‘tough on crime’ credentials believing it to be a vote-winner and, indeed, have generally acted on the assumption that any other stance was tantamount to electoral suicide. For the Attorney General therefore to be publicly critical of America’s incarceration binge may be a signal that the politics of crime is changing – and changing in a way that for years felt impossible.

More remarkable  – and a sign that something very significant may slowly be taking place – is that Holder’s announcement was greeted, not by fury and condemnation – which would have been expected at pretty much any time in the past quarter century – but by a large measure of agreement and of something close to bipartisan support. Far from being accused of being ‘soft on crime’, Holder’s announcement has generally been received as worthy of serious consideration and has been the subject of broadly tolerant debate.  In truth, there have been wider signs of change for some time.

First, the US state-level prison population is in decline. True, the decline in 2012 was only 1.7%, but it was the third year in a row there had been a drop and is clearly not a blip. Though the Federal prison population has been rising – and it is this Holder aims to change – in 2010 Congress passed the Fair Sentencing Act which reduced the vast disparity in the way federal courts punished crack as against powder cocaine offences, leading to reductions in sentences for thousands in federal prisons – the majority African-American. The state level declines have been hugely influenced by three states, and by California in particular – a court order having forced its legislature to slow down the rate of admissions. But at least 25 other states have also seen their prison population drop, with fairly radical reforms occurring in states such as Florida, Texas, Kansas and New York. In the latter case changes to the notorious Rockefeller drug laws appear to have played a significant part in the State’s significant prison reductions.

And it is not just imprisonment. Whilst one of the regularly used illustrations of American ‘exceptionalism’ in the penal sphere is the continued use of the death penalty, the reality is that it is in continuous decline. Eighteen states have abolished it entirely, the most recent being Connecticut in 2012 and Maryland in 2013. Although the remainder retain it for now, a significant number never use it. Indeed, since the death penalty was reintroduced in the late 1970s, over three-quarters of all executions have occurred in just eight states, and Texas alone accounts for 37% of the total. Drugs too. In the last year, two states, Washington and Colorado, passed ballot initiatives to legalize the production, distribution and sale of marijuana for adults – a decision that the Attorney General is allowing to proceed. Twenty states have legalized marijuana for medical purposes. The impact of these changes may not yet be huge, but symbolically they are a world away from Nixon’s war on drugs rhetoric.

The reasons for the changes are not entirely clear. Undoubtedly finance and budgetary considerations have been important. The sheer scale of the American incarceration boom has left some states with future financial costs they have little chance of being able to meet without slashing other areas of public expenditure – including public education. In addition, we shouldn’t forget that crime has been in decline for some time: violent crime in the US dropped 15% between 2002 and 2011, and property crime nearly 20% in the same period. This has undoubtedly been a factor in opening up a space in which progressive law reform – visible just as strongly in many Red states as Blue – can begin to gain a foothold.

It’s important not to get too carried away in all this. The United States still accounts for close on one quarter of the world’s incarcerated population. The number of prisoners on death row – currently over three thousand – remains stubbornly high and the continued availability of firearms leaves America with a homicide rate nearly three times that of Canada and four times that of the UK. Nevertheless, after years in which social scientific discussion of US penal policy and practice has been almost entirely dystopian, it seems now the green shoots of a more optimistic future are beginning to emerge.