On Tuesday, New Yorkers will vote in primary elections to choose the Democratic and Republican candidates for the city’s directly elected mayoralty. Tony Travers writes that while the Democrats have been out of power for two decades, in a city that is generally supportive of them, they have now emerged as front runners to win the vote in November, most likely in the form of Bill De Blasio. He argues that cities in Britain which also now have directly elected mayors, such as London, should watch the contest and its results with interest.

The Democrat and Republican primary elections for the post of New York City mayor take place this week.  Michael Bloomberg is coming to the end of a twelve-year stint as mayor, having won his first election in the immediate aftermath of the September 11 2001 terror attack on the United States, notably at the World Trade Center.  Bloomberg was preceded in office by Rudolph Giuliani, the tough Republican credited with policies such as ‘zero tolerance’ policing.  Although Bloomberg originally also stood as a Republican, he switched to an Independent ticket.  The Democrats have not held City Hall since David Dinkins left office in 1993, a remarkable failure in a strongly Democratic city.

Between them, Giuliani and Bloomberg have overseen the taming of once-edgy New York.  The city now has one of the lowest crime rates of any American city and, like London, is home to many of the world’s discerning super-rich.   The similarities between the two cities are remarkable: both are enjoying relatively rapid population growth, both have survived a financial-sector crisis far better than was feared, while both have seen a sharp fall in crime.  The economic make-up of New York is very similar to London, with large financial & business services, cultural and transport sectors.  The arrival of a directly-elected mayor in London from 2000 meant their systems of government converged to some extent. 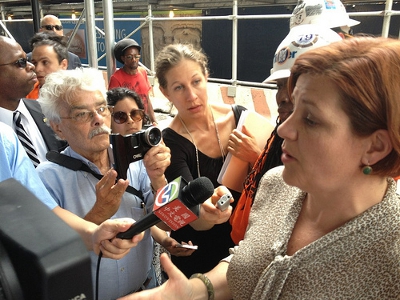 New York’s mayor is, in reality, significantly more powerful than his London counterpart with responsibility for all the services run by the London mayor and the boroughs, plus health, schools and parts of the criminal justice system.  The Mayor of London has, however, significantly greater powers over transport than his New York counterpart.  New York’s five boroughs are minor players in the city’s government compared with the London ones.

The primary elections taking place in New York this week take place against the backdrop of a widespread assumption that the Democrats have a good chance of re-gaining City Hall.  Early in the Democratic primary contest, City Council speaker (leader) Christine Quinn was seen as the front-runner.  She had forged an effective working relationship with the super-competent Bloomberg and has positioned herself as a ‘continuity-with-progress’ candidate.  The key local media, notably the New York Times, have endorsed her.

Quinn’s main challengers for the prized post of Democrat candidate are Bill Thompson, a former city comptroller [a directly-elected financial regulatory position] and Bill De Blasio, the city’s Public Advocate [an elected ombudsman for the city].  John Liu, the current city comptroller is also in the race.  Anthony Weiner, a former congressman, has seen his challenge collapse as a result of a scandal.   Thompson stood against Bloomberg – and lost – in the 2009 election.

De Blasio has emerged as the front-runner in the past month, putting forward a left-leaning slate of policies, including a proposal to raise income tax 3.88 per cent to 4.41 per cent on those earning over $500,000 (£350,000) so as to pay for additional kindergarten and after-school programmes.  Perhaps more than any of the other Democrat candidates, De Blasio resembles traditional liberal Democratic candidates of old.  Recent polls suggest he may win sufficient votes to avoid a second-round run-off. 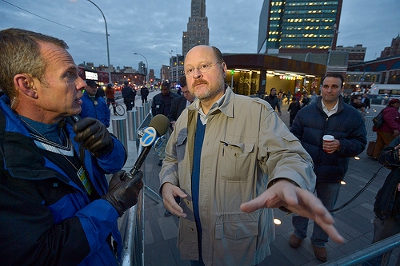 For the Republicans, the field is smaller.  The front-runner in Joe Lhota, former head of the Metropolitan Transportation Authority [the State-controlled subway, rail and bus provider], who has consistently led the polls and also seems likely to win more than the 40% of the vote required to avoid a second round of primary voting.  His chief rival is John Catsimatides, a businessperson with interests ranging from supermarkets to oil.  It is fair to say the Republican party, after so many years of success in a largely Democrat city, are not the front-runners in the 2013 contest.

It therefore seems likely that New York may elect a liberal Democrat into office at a time when London is in the second term of a (New York-born) Conservative mayor.  Britain now has 13 years’ experience of directly-elected mayors, an American import which has taken root in London, Liverpool, Leicester, Bristol and a number of other cities.  Although Birmingham, Manchester and Leeds (among others) rejected the reform, there is now a critical mass of cities which understand the dynamics of mayoral government. There is still much for British cities to understand about the operation of mayoral government systems, for example, in relation to the appointment of the mayor’s office and to the process of changeover from one mayor to another.  But there is no doubt that mayors are here to stay in Britain.

The mayoral election will take place on 5 November, with the new mayor taking office in January.  By chance, the new One World Trade Center [formerly the ‘Freedom Tower’] will be completed just after the new mayor takes office.  Michael Bloomberg’s election and administration will have precisely covered the period from 11 September 2001 to Lower Manhattan’s restoration.  After 12 years of Bloomberg’s steady and patrician government, New York City faces another new beginning.

Tony Travers – Greater London Group
Tony Travers is Director of British Government @ LSE and co-director of LSE London, a research centre at the London School of Economics. He is also a Professor in the LSE’s Government Department. His key research interests include local and regional government and public service reform. He has been an advisor to the House of Commons Education Select Committee and the Communities and Local Government Select Committee. He has published a number of books on cities and government, including Failure in British Government: The Politics of the Poll Tax (with David Butler and Andrew Adonis), Paying for Health, Education and Housing: How does the Centre Pull the Purse Strings (with Howard Glennerster and John Hills) and The Politics of London: Governing the Ungovernable City.