This week, a throwaway remark from the US Secretary of State, John Kerry, on placing Syria’s chemical weapons under international control, has become a real policy proposal led by Russia. Jasmine Gani writes that this ‘blunder’ made good is symbolic of the Obama administration’s lack of strategic direction on Syria. Only two weeks ago, Obama was pushing heavily for military intervention, but a vote against in the UK’s House of Commons, increasing opposition in Congress, and the shadow of the Iraq war, have all undermined Washington’s urgent push for action, and raised questions about US motives for any attack.

In yet another dramatic twist in the Syria crisis, a seemingly throw-away remark by US Secretary of State John Kerry opened the door for a non-military response to the deadly chemical attack of 21 August. Russia and Syria, seizing on the comments, tabled a proposal to place Syria’s chemical weapon stockpiles under international control in an attempt to avert military action.  It may have simply been a delaying tactic, or an attempt to embarrass the US by calling its bluff; but the suggestion has now been seriously considered by the US, with Obama stating that this resolution would ‘absolutely’ take military action off the table.  Although Obama downplayed Kerry’s remarks, revealing that he already discussed the matter with Russia at the G20 summit last week, this was clearly a blunder from his Secretary of State – but a convenient one nevertheless that provides the US with a way out from a problematic commitment to military action.  This is a marked change from the US position just two weeks ago when military intervention was a question of when, not if.  Several developments have altered the American calculus since then: increased public opposition; the lack of greater international support; and uncertainty within the US administration over its strategic objectives. 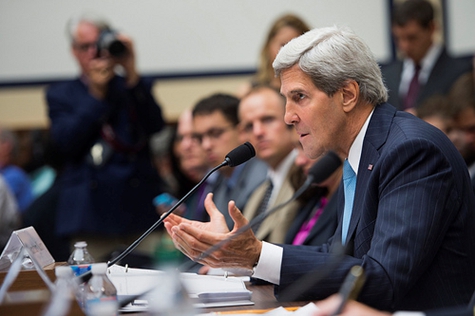 Secretary of State John Kerry at the House of Armed Services Committee on 10 September Credit: Secretary of Defense (Creative Commons BY)

First, public opinion has not been on Obama’s side.  In contrast to their usual ambivalence to foreign policy, the majority of the American public are strongly opposed to any military involvement.  According to a joint poll by the Pew Research Centre and USA Today, 48% were opposed to military involvement last week; since then, ironically amid intense lobbying from the US administration, this figure has gone up to 63%. Iraq and Afghanistan have made the public war-weary and war-wary, and the scepticism has filtered through to their representatives in Congress.  The vote on military strikes by the Senate Committee on Foreign Relations was close at 10-7 in favour.  A vote in Congress, now expected to be postponed after recent developments, is likely to be less favourable: a poll on Friday indicated 230 of the 433 members were considering voting against Obama’s motion.  Even if he were to win a slim majority, it would hardly warrant a strong domestic mandate for the crucial decision of war; and if he were to lose the vote it would be a massive blow for the US president’s authority and credibility, at home and abroad.  Such an outcome would be politically disastrous for the Obama administration and would have serious implications for the rest of his second term.

Second, lukewarm international support made apparent at the G20 summit has not just put the brakes on US intervention but has affected collective US confidence on whether it is in fact the right course of action.  The US retains the hard power capacity to act unilaterally; but it is not the US’ way to rely on this alone, its legitimacy –bruised in the past ten years – matters too.  Britain, normally the first to confer that legitimacy, delivered Obama an unexpected set-back with a parliamentary vote against intervention.  Though Kerry was keen to minimise its significance in a statement the following day, undecided members of congress have stated that it did have a bearing on their position, generating doubt over intelligence that evidently was not good enough for their British allies.  Moreover, the rushed vote in the UK put pressure on the US and France to similarly consult their respective assemblies, despite the fact that Obama and Francois Hollande are not constitutionally bound by any such vote.  The UK effectively slowed down the momentum for military intervention, allowing room for deeper scrutiny of US policy and with that growing domestic scepticism.

The past two weeks have sharply exposed the lack of direction in Washington’s policy in Syria.  Obama and his government did not seem to know themselves what the defining objectives of military action were (or at least how to sell them), nor how to proceed in the aftermath.  Hence the constant dual messages in an effort to win over both hawks and sceptics of war, at home and abroad. This has been reflected by the shifting emphasis in goals: initially Obama and Kerry focused heavily on national security interests – the credibility of the US and its red lines, reassurance to its allies in the region namely Israel and Jordan, and a warning to its enemies Iran and North Korea.  With his counterparts abroad wondering why they should go to war to save face for the US, Obama deftly refocused on humanitarian goals and international norms in the run-up to the G20 summit: it was the international community’s credibility on the line, not the United States’.  This did seem to make some headway; Russia cautiously accepted there might be a case for intervention if it was proven the Syrian government was behind the chemical attack, and the UN hastened the timetable for the weapons inspectors’ report for fear of appearing redundant.  But Obama’s rhetoric also served to provoke questions over inconsistency towards the use of chemical weapons – why was action being urged now when other states, namely Iraq and Israel, had allegedly used chemical weapons in the past with apparent impunity?  Coincidentally in recent days, declassified CIA files have confirmed that the US aided Saddam Hussein’s use of chemical weapons against Iran in 1988.Opponents to intervention have highlighted this inconsistency, arguing that it undermines Obama’s calls for urgency and raises questions over US motives behind a military attack.

Beyond the mixed motives, there has also emerged a deeper ambiguity over the US’ intended strategy.  Aiming his comments at the opponents of intervention, Obama declared any military strikes would be limited, merely to punish the Assad regime, not to remove it from power.  On the other hand, when probed by interventionists at the Foreign Relations Committee, Kerry argued the strikes would indeed destabilise the regime and might be the first step in Assad’s removal from power; in the debate he even briefly opened the door for the deployment of ground troops in the future, which he then swiftly retracted.  The US government were attempting to straddle both camps, while concerns about collateral damage, the dangers of striking chemical weapon facilities, and of regional consequences, were not adequately answered.  The net result has been a highly unconvincing account of strategic objectives and post-intervention planning; thus the risks of military involvement now look greater for the US than they did two weeks ago.  For all of Obama’s assertions that this will not be Iraq, its shadow and the fear of repeated mistakes loom large over Washington’s foreign policy decisions.

Given the above developments Russia’s proposal offers a timely opportunity for the US to back down from a risk-laden intervention without having to entirely give up on Obama’s notorious red line drawn over a year ago.  The removal of Syria’s chemical weapons is a clearer and more limited goal for the US to work towards; crucially it can be pursued through the UN, avoiding some of the controversies highlighted above.  In this complex and costly political game of chess, it will now be the US’ turn to call Russia’s bluff by taking its proposal to the UN Security Council.  It will seek to table a binding and timetabled resolution, crucially tied to punitive measures if Syria fails to comply; if it succeeds, all eyes will be on the Russian veto.