Energy availability is more important than capital and skilled labor for the location of manufacturing industries in the U.S.

Energy reserves are distributed much more unevenly across U.S. states than physical capital and skilled labor, and the energy intensity of manufacturing sectors is also strongly skewed. Using data from 2001-2009, Thomas Michielsen finds that a one standard deviation increase in coal or natural gas reserves per capita, roughly corresponding to the difference in per-capita natural gas reserves between Texas and California, is associated with a 20-25 percent increase in value added and employment in energy-intensive sectors.

Although fossil fuels are traded nationally and internationally, substantial price differences for consumers persist between U.S. states. Industrial natural gas prices are more than twice as high in New England than in gas-abundant Texas or Alaska. These discrepancies are caused by transport costs, which are particularly salient for coal and electricity, and local taxes and subsidies. Aluminum, glass and lime manufacturers, which spend more than 7 percent of their turnover on energy, therefore have a strong incentive to locate in energy-rich states.

Using data from 2001 to 2009, on the effect of coal, natural gas, oil reserves as well as hydropower capacity per capita on value added and employment in manufacturing sectors, I found that a one standard deviation increase in per capita coal or natural gas endowments increases value added in industries that are more energy intensive than average by more than 20%. Coal reserves primarily affect firms’ location decision through energy prices: coal-abundant states such as Wyoming and Montana have lower electricity prices, which make these states more attractive to energy-intensive industries. Natural gas, oil and hydro endowments also have a direct positive effect on energy-intensive manufacturing, conditional on energy prices, which may be caused by forward and backward linkages to the extractive industries or because the manufacturing industries benefit from infrastructure that was built for the energy sector. 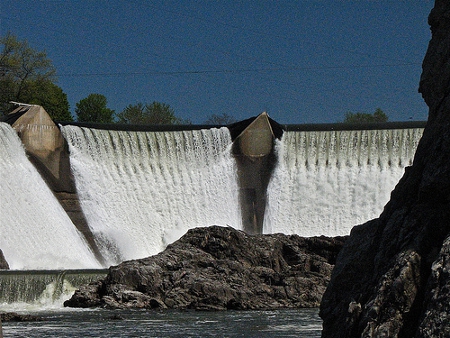 The determinants for firms’ location decisions are of great import to local policy makers wanting to create jobs in their state. Although my study focuses on the effect of proven energy reserves, which have been relatively stable until the recent shale oil and gas boom, the findings highlight a role for policies that increase energy availability in a broad sense. Examples include investing in electricity generation, upgrading the interstate electricity grid and encouraging shale gas exploration and production. In one case, Shell is planning to build a large petrochemical plant in Western Pennsylvania because of its large shale gas reserves, which could create a larger chemical industry in the area.

Most research on the influence of production factors on industry location restricts itself to capital and (skilled) labor and disregard energy, even though average expenditures on capital and energy are relatively similar for manufacturing firms (3 percent and 2 percent of turnover, respectively), suggesting that the two may be equally important for location decisions. Studies that do take energy into account tend to focus on energy prices and do not address the direction of causality: do states with low energy prices attract energy-intensive firms, or do states with a large energy-intensive sector have policies that lower energy prices, for example because of lobbying? I address this problem by using proven energy reserves as the primary unit of analysis. Up until 2008-2009, these have been relatively stable in the U.S. and under limited control of policy makers.

My estimation procedure includes the three most common theories of industry location. The first is comparative advantage: due to differences in technology across states, some states may have an advantage in certain sectors. The second is the factor abundance hypothesis: the idea that industries that require a lot of e.g. skilled labor are more likely to locate in states that have a highly educated population. Lastly, I control for explanations from the theory of new economic geography, which posits that industries are likely to cluster near large markets such as the agglomerations in the Northeast. 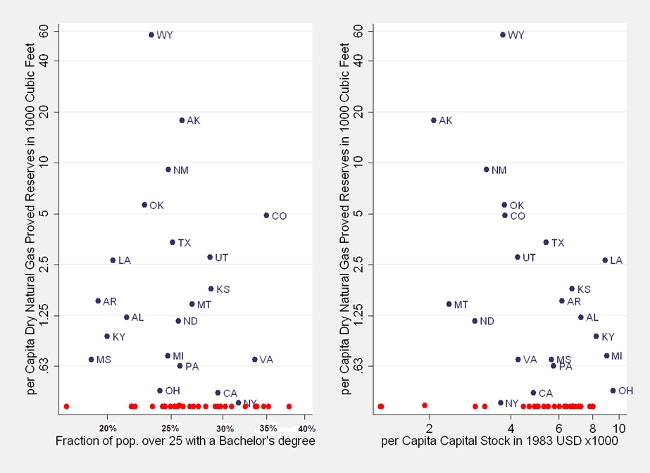 I find support for the first two theories, but not for the last. Interestingly, energy availability is more important for energy-intensive industries than capital- and skill availability is for capital- and skill-intensive industries. Energy reserves are much more concentrated than physical capital and skilled labor: more than half of U.S. states have no natural gas at all, and Wyoming has more than 150 times as many reserves per capita as New York. The stock of physical capital per capita differs by a factor 8 across states at most (see Figure 1 above). Therefore, capital-intensive firms can find their inputs in a large number of states and can give other considerations, such as being close to consumers, priority in the location decision, but energy-intensive firms have limited options if they want to be close to energy reserves. 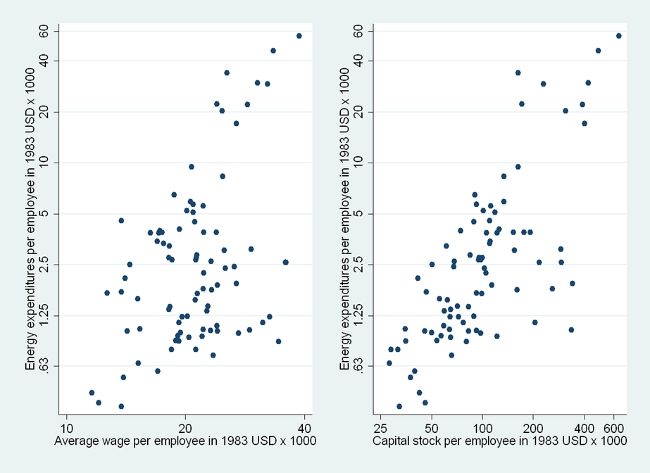 Moreover, the energy-intensity of manufacturing sectors is much more dispersed than their capital- and skill-intensity. Figure 2 illustrates that energy expenditures per worker differ much more across sectors than the average wage per worker, which is a measure of skill-intensity, and the capital stock per worker. Energy expenditures in the most energy-intensive sector are 152 times as large as in the least energy-intensive sector. The largest difference factors for capital and skill intensities are 22.8 and 3.3, respectively. Thus, it is very important to have access to cheap energy for the most energy-intensive firms, but comparatively less important to have access to skilled labor and capital for the most skill- and capital-intensive firms.

Although energy is often overlooked in industry location analyses because it is a tradable commodity, it plays a significant role in the distribution of manufacturing sectors. These findings suggest that energy is more important than capital and skilled labor for the location of manufacturing industries in the USA. While I have focused on reserves as an exogenous source of energy abundance, policy makers can also influence energy availability, for example, through investments in nuclear, solar and wind energy. Considering the strong influence of coal and hydro endowments on the location of electricity-intensive industries, such investments can play an important role in attracting value added and employment in energy-intensive sectors.