Women are still massively underrepresented in public office, with less than a quarter of the House and Senate made up by women. But what role do gender stereotypes play in voters’ consideration of female candidates? Using experimental studies, Tessa Ditonto, Allison Hamilton and David Redlawsk tested what information about candidates voters searched for during presidential campaigns. They found that not only do voters, especially Republicans, look for more information about a woman’s qualifications and competence for office they also look for more information about their handling of ‘compassion issues’ – issues that have been traditionally identified with women.

The under-representation of women in political office is a well-documented phenomenon. While the number of women in office has risen slowly over the years, women currently comprise only about 17 percent of the House of Representatives and 20 percent of the Senate (and the numbers are even worse for executive offices). Despite this, it is still unclear how candidate gender contributes to this phenomenon and, more specifically, whether voters’ stereotypes and biases toward women candidates play a role. 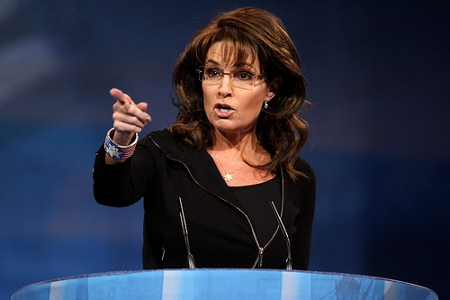 Certain elections seem to draw the public’s attention to the existence of sexism and gender based stereotypes, which brings this question to the forefront of popular and scholarly discussions. The 2008 presidential election, for example, saw Hillary Clinton alternatively described as too masculine and aggressive to be likable and too likely to cry under pressure to be fit for office. At the same time, Sarah Palin was often portrayed in a hyper-sexualized manner and was also questioned constantly on her competence and qualifications. Both women ultimately lost their races, but to what extent did these sorts of stereotypes contribute to their respective defeats?

The current scholarship on candidate gender is largely inconclusive. Many studies of real-world elections find that overt bias toward women candidates is no longer a major obstacle to their electoral success, and that their gender can actually serve as an advantage in certain circumstances. At the same time, a large number of experimental studies find that women candidates are evaluated differently from (and often, more negatively than) men on dimensions such as character traits, perceived policy specializations, qualification for office, and electoral viability.

What does this contradictory evidence mean for women candidates, then? We argue that in order to better understand the relationship between candidate gender, voters’ attitudes toward women political candidates, and electoral outcomes, we have to consider the importance of information. In other words, before they can form evaluations and decide whom to vote for, voters have to search for and encounter information about the candidates in a particular race. Only after gathering and processing a sufficient amount of information, can they reach any sort of conclusions about a candidate. At the same time, if voters come to the table with assumptions about women candidates in general, those stereotypes will likely influence the type and amount of information they seek out about the particular women running in a given race. These differences in search patterns could then ultimately influence vote choice.  Rather than a direct relationship between candidate gender and vote choice, then, we argue that gender has an indirect effect on voting through information search.

In order to test this idea, we conducted a series of experimental studies using the Dynamic Process Tracing Environment, which is an online computer program that allows researchers to mimic the complex and constantly-changing nature of a political campaign’s information environment. We use data from two sets of experiments, one of which was conducted in the mid-1990s and the other which was completed in the spring of 2011. In each set of experiments, subjects were asked to participate in a “campaign” in which they were told that a number of invented candidates were running for president. We manipulated the gender of the candidates in the race, and participants were given the opportunity to learn a large amount of information about each of those candidates. Information included various policy positions, background characteristics, endorsements from interest groups, and other politically-relevant information. After the campaign ended, participants were asked to vote for the candidate of their choice. 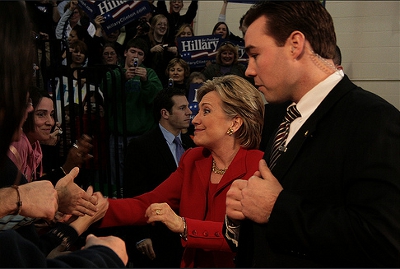 Our results suggest that gender matters for women candidates, and that common gender-based stereotypes may be leading voters to different search patterns when they see a woman running for office than when they see a man. For example, one common stereotype ascribed to female candidates is that they are less competent or qualified to hold office than their male counterparts. In both of our studies, participants paid more attention to competence-related information for female candidates than for male candidates. In other words, when subjects saw a woman running for office, they looked for more information that provides some cues about whether she has the qualifications to serve in office, how she has done in the past, and how she is expected to do if elected president. It seems, then, that participants in our studies were more likely to “check up” on a candidate’s competence and qualifications if that candidate was a woman.

Interestingly, while all participants searched for more competence related information for female candidates in the first studies, this trend toward more competence search was found primarily among Republicans in our later experiment (Figure 1).  This suggests that, more contemporarily, Republican voters may be more concerned with a woman’s competence than Democrats. There are many possible reasons for this, including differences in gender ideologies between the parties or, possibly, a residual effect from the focus on competence during Sarah Palin’s candidacy. 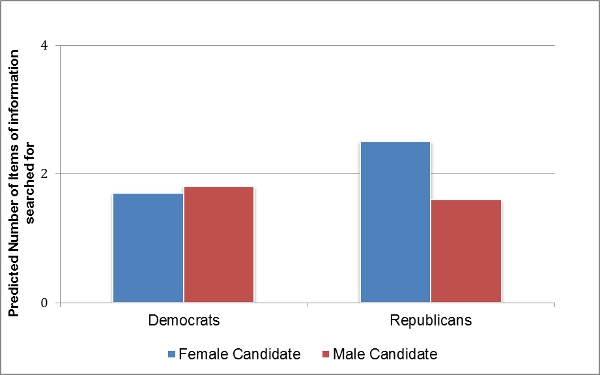 Along with an increased interest in competence, we also find that participants tended to search for more information related to “compassion issues,” or policy issues that have traditionally been considered to be “women’s issues,” when they are presented with a female candidate than when a candidate was male (Figure 2). This makes sense given previous findings in the literature that women are considered to be more adept at handling these types of issues (such as education, child care, health care, and discrimination) than other, more “masculine” issues (like the economy, foreign policy, and crime). At the same time, male candidates received more search related to policy issues, more generally. This could serve to disadvantage female candidates in elections when compassion issues are not as salient as things like the economy and military engagements. 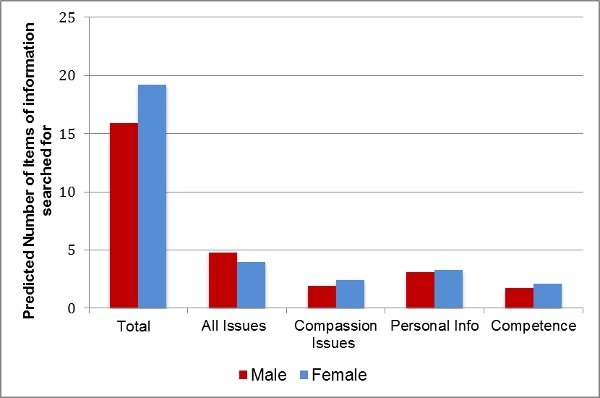 So do gender-based stereotypes affect women who run for office? Our results suggest that they do, though perhaps not in the straightforward manner we may have expected. Instead, it is through the information that voters gather during a campaign that we find a candidate’s gender, and the stereotypes held by voters related to gender, to matter.

This blog post is based on the article “Gender Stereotypes, Information Search, and Voting Behavior in Political Campaigns”, forthcoming in Political Behavior.