October 1st will see the opening of the first Health Exchanges as part of the 2010 Affordable Care and Patient Protection Act. Many are confused about the law and how it will operate, and it also faces considerable opposition from the Republican right. Theda Skocpol and Lawrence Jacobs look at the core parts of Affordable Care and address some of the questions and controversies that have emerged around it.

The Affordable Care and Patient Protection Act that was passed by Congress and signed into law in March 2010 sets in motion reforms in U.S. health insurance coming into full effect in 2014. Most Americans are confused about what the law promises – and no wonder. Opponents falsely decry the law as a “government takeover of health care.” Supporters are often tongue-tied, implying that the reforms are too complex to explain. But that is not true. The core parts of Affordable Care are easy to explain, and polls show they are popular with most Americans. 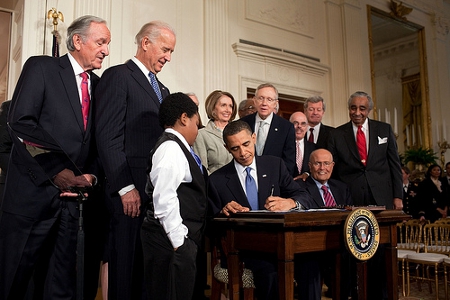 Every state – from Oregon and Vermont to Texas and South Carolina – has the right to take a strong role in implementing health reform. Its own elected officials, businesses, health providers, and citizen groups can decide how to set up their state’s health exchange and other programs to fit local conditions. Health reform does not impose “one size fits all” and the proof is evident around the country in red and blue states that are already putting health reform in place in various creative ways. Citizens groups can get involved in state-level decisions.

Health reform remains politically contentious, and many citizens are still learning what the law promises to do. Here are some answers to frequently asked questions:

• What reforms are already in place? Affordable Care already helps children, young adults, and senior citizens. Children with health problems cannot be denied coverage by insurance companies. Young adults can stay on their parents’ family plans until age 26 – and millions more already enjoy coverage they could not get before 2010. Medicare for senior citizens now includes free health check-ups and additional help to cover prescription drugs. By 2014, all seniors will pay the same low prices for prescriptions. In addition, millions of Americans will receive rebate checks from insurance companies, because the reform requires premiums to be spent mainly on health care, not CEO salaries and bureaucracy. Companies have to refund premiums if they don’t spend eighty percent on actual health services.

• What about the “individual mandate” – will the government force me to buy insurance I cannot afford? The brouhaha about the mandate is a lot of public fuss about very little. Starting in 2014, when good public or private health coverage is available to all Americans – and only after there are subsidies to help people pay – everyone will be asked to choose one of the plans available in his or her state. But the law says that people do not have to obtain coverage if they still cannot afford it, or if they have religious objections. Even when such exceptions do not apply, people can pay a small fine instead. The reason for asking individuals to contribute is obvious: when all Americans can afford insurance, we don’t want people to fail to sign up (or pay a fine) and thus force their neighbors to pay if they get very sick or end up in an accident. It’s just like car insurance: the system works only if everyone is included. America’s doctors and hospitals won’t leave someone to suffer or die, so we have to make sure everyone pays their share.

• Can the United States afford health reform? The Affordable Care Act is already reducing the rate of increase in health costs. The law contains many provisions to encourage hospitals and doctors to experiment with cost-saving reforms. Right now, the United States wastes a lot of money on health care, without covering all our people. Affordable Care puts us on a better track, to provide coverage for everyone at prices families, businesses, and government can afford. The nonpartisan Congressional Budget Office projects that the law will reduce the federal budget deficit modestly in the first decade and by a large amount in the second decade. Repealing or weakening Affordable Care would increase the federal budget deficit.

• Will government bureaucrats decide what medical care is delivered? Absolutely not. Doctors along with patients and their families remain in full charge of medical decisions. And there are no “death panels” in health reform. That claim is a lie.

This article first appeared at the Scholar’s Strategy Network.

Lawrence Jacobs – University of Minnesota
Lawrence R. Jacobs is the Walter F. and Joan Mondale Chair for Political Studies and Director of the Center for the Study of Politics and Governance in the Hubert H. Humphrey School and the Department of Political Science at the University of Minnesota. His center is a preeminent hub for political and policy analysis in the Midwest. Dr. Jacobs has published 14 books and edited volumes and dozens of articles on elections, legislative and presidential politics, elections and public opinion, and a range of public policies including health care reform and American politics (Oxford University Press, 2010) and Politicians Don’t Pander: Political Manipulation and the Loss of Democratic Responsiveness (with Robert Y. Shapiro, University of Chicago Press).