While the current U.S, government shutdown is not the first by any means, it is by far the most politically polarized, according to Marina Azzimonti. Using an index that measures the frequency of newspaper articles that report disagreements about fiscal policy, she finds that levels of political polarization in the current shutdown are four times the average value between 1981 and 2013, and nearly twice what it was during the last shutdowns of 1995 and 1996.

A deep political divide in Congress has triggered the 18th government shutdown in US history. Is this one any different? To answer this, we need to be able to measure how “bad” this shutdown is relative to previous ones. One way to quantify the magnitude of the effects of a shutdown is to analyze the size and evolution of political polarization. Using the Political Polarization Index to contrast current levels of political disagreement with those during the 1995 shutdown,  I find that the degree of polarization observed in the first days of the current shutdown are an order of magnitude higher than during the previous one. Moreover, the index is highest it has ever been since 1981.

Shutdowns, polarization, and the US economy

History has shown conclusively that shutdowns are not good for the economy. Not only because more than 800,000 out of 2 million federal employees are forced to take leave without pay, and most museums, libraries, and parks are closed; but more importantly, because they signal strong political disagreement. They indicate that something went wrong in the bargaining process. They cover the economy in a cloud of uncertainty about the future: Will Obamacare survive? Is the US government going to default on October 17th or will Congress raise the debt ceiling? Who will pay for a larger government (or higher debt)? The top 1 percent? Our kids? Our grandkids? 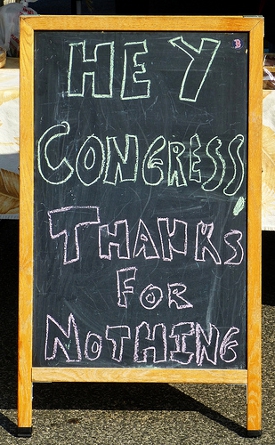 Uncertainty about the timing, size, and composition of fiscal policy negatively affects the economy. It has a strong and persistent destabilizing effect on markets. The VIX index (a measure of stock market volatility) increased 63 percent during the 1995 shutdown and decreased only 25 percent in the two weeks following the end of the shutdown. In periods of high uncertainty firms delay hiring and investment decisions; household spending in durable goods stalls. This slows employment creation and depresses output. The longer the political gridlock lasts, the worse the economic consequences of disagreement are. In a recent study, I found that an increase in the political polarization index of a magnitude similar to the one observed between 2007 and 2012 results in a loss of 1.75 million jobs after 6 quarters, an 8.6 percent decrease in investment after 5 quarters, and a reduction of 2 percent in output. This cannot be directly extrapolated to the current shutdown, since the experiment performed considers an increase in polarization that lasts one full quarter (i.e., it is very persistent) and uses data between January 1981 and April 2013 (i.e., it excludes the lasts few months). But it suggests that long periods of polarization-induced uncertainty can be detrimental for the economy: polarization matters.

Political polarization in Congress has been rising since the 1950s, as documented by Rosenthal and Poole  using the voting pattern of members of Congress. Moreover, the political ideologies of Democrats and Republicans have been diverging to the extremes since 1975. This can be seen in Figure 1, which depicts parties’ ideological positions on a Liberal-Conservative dimension. Interestingly, 1976 was the year of the first government shutdown, and was then followed by a series of shutdowns in 1977.

Clearly, political disagreement is necessary but not sufficient to trigger a government shutdown (otherwise we would be observing one every year). The composition of members of Congress (e.g., which party controls a majority of seats, who has been appointed to the Appropriations committee) and whether the President’s party controls both houses are also relevant in determining the likelihood and duration of a political gridlock.

In my study of political polarization, I constructed a high-frequency index of political polarization which takes these additional factors into consideration. The index measures the frequency of newspaper articles reporting political disagreement about fiscal policy. I first count the number of articles containing terms related to political polarization and fiscal policy, such as “polarization”, “gridlock”, “budget”, etc. (see here for a complete list of keywords). Because the volume of digitalized news has been increasing over time, the raw polarization measure is then scaled by the number of articles published in the same newspapers over the same interval of time. Finally, the index is normalized such that the average value over the sample period equals 100. Only major US newspapers have been included in the analysis.

Figure 2 shows the monthly evolution of the Political Polarization Index (PPI) between January 1981 and today. A few things are worth noticing about the index: (i) it spikes near presidential and mid-term elections, (ii) it has been relatively stable before the start of the 2007 recession, where it shows an increasing trend, (iii) it is low during wars, and (iv) it increases around well-known episodes of political disagreement regarding fiscal policy such as the 1995 shutdown, the Obamacare debate, the 2011 debt-ceiling debate, and the 2012 “fiscal cliff”. After the fiscal cliff was successfully averted, the PPI declined almost continuously until the end of September. 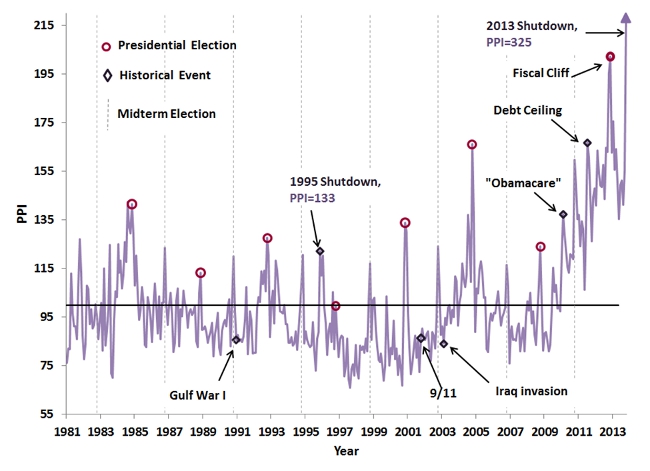 Note: The last datapoint only includes the first 4 days of October

On September 30th, 2013, Congress shut down due to disagreement regarding details of the Affordable Care Act proposed by President Obama.  In the following four days, the PPI reached an unprecedented average value of 325, with a peak level of 400 on October 2nd (as Figure 3 illustrates). This is four times the average value between 1981 and 2013, and the highest one observed to date. To put things in perspective, the index averaged only 133 during the 1995 shutdown (the longest one in history), reaching a maximum value of 229 between December 15th 1995 and January 6th 1996.

Polarization levels in the 2013 shutdown are much higher than in the previous one partly because Congress is now divided, with the Republican Party controlling the House and the Democratic Party enjoying a majority of seats in the Senate (in 1995 both Houses were under Republican control). Perhaps even more important is recent history: the Obamacare debate, the debt ceiling crisis of 2011, and the tax expirations-induced “fiscal cliff” in 2012 only helped to intensify the debate and widen the distance in position taken by members of Congress (both across and within party lines). Are politicians using these episodes to signal their type and win votes? Or is this just a reflection of an extremely divided society? Either way, the figure reflects the fact that even though some of these episodes were “resolved”, polarization remained elevated. Far from returning to its long-run average of 100, the index just seems to keep growing.

At the end of the day, disagreement has a cost: government inaction. We are still slowly recovering from the Great Recession, and escalating political polarization does not exactly help. Perhaps it’s time to remind ourselves that “United we stand, divided we fall”.