The large-scale protests over immigrants’ rights in 2006 shifted how Latinos view the U.S. political system and their own abilities to influence government outcomes.

With the rise of often national-scale collective actions, such as the Occupy movement, understanding how these actions shape political attitudes is becoming more and more important. Using an in-depth study of the 2006 wave of Latino protests over anti-immigration legislation, Michael Jones-Correa, Sophia J. Wallace and Chris Zepeda-Millán argue that these protests contributed to important shifts in Latino public opinion. Importantly, they also find that being in close proximity to small marches has a positive impact on feelings of political effectiveness, while being closer to larger protests increases people’s sense of political alienation.

Academics, media pundits, and activists alike have often pointed to the policy and institutional changes that large-scale collective actions can produce. And collective action seems increasingly prevalent, as evidenced by recent mobilizations around Occupy Wall Street, the Trayvon Martin case, and against military intervention in Syria. Yet despite its role in generating social change we still know relatively little about how collective action shapes the political attitudes not only of those engaged in these mobilizations but of those who may be watching from the sidelines. By studying the wave of immigrant rights demonstrations in 2006, we found that these protests contributed to important changes in Latino public opinion and attitudes towards government.

According to prominent social movement scholars, for members of the general public to support and/or participate in social movements, they must first believe that their actions can make a difference. Thus, the question of whether protests make potential actors feel more effective or alienated is of utmost importance. While more optimistic portrayals of social movements have come to dominate the literature on political activism, there is little systematic evidence of the cognitive impacts of protests. Hypothetically, large-scale collective action can have varying (both positive and negative) effects on public attitudes about politics. So do social movements trigger a sense of political efficacy, or instead of political alienation? 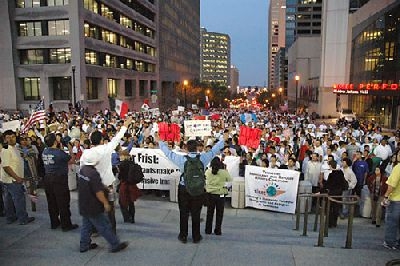 The primarily Latino 2006 protest wave provides an excellent opportunity to explore this research question. In the spring of 2006, up to five million people took part in more than 350 demonstrations across the country in response to proposed federal anti-immigrant legislation, H.R. 4437. In our study, we tested how exposure to protests that occurred near to where respondents lived shaped their attitudes towards government. To conduct this analysis, we combined the Latino National Survey (LNS) 2006 with our 2006 Immigrant Protest-Event Dataset. The LNS provides a unique vehicle for analyzing the impact of the marches since the survey was in the field before, during, and after the protests occurred. The data allows for the consideration of measures of both spatial and temporal proximity to explain differential results in attitudes towards efficacy, trust in, and alienation from government.

First, we collected and created a protest dataset that contained 357 observations between Feb 14th, 2006- and May 1st 2006. The protests were spread across the country in both traditional immigrant gateways but also new destinations, as indicated by the map below in Figure 1. The distribution of the protests in terms of size and dates is represented in the graph in Figure 2. Second, we identified the addresses of respondents in the LNS to map the distance in time and space for each respondent to each of the protests. Then we created two protest measures to capture proximity in terms of time and space for each respondent: one that measures exposure to a large protest before the interview, and another that counts the number of small protests that occurred near a respondent before the interview. 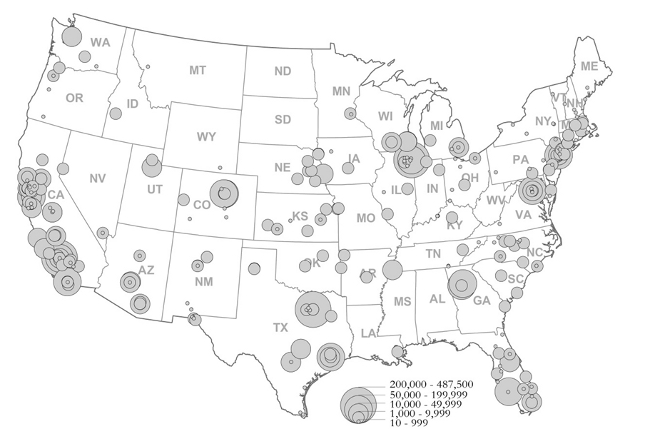 We used five survey items to look at attitudes towards government, including measures of political efficacy, trust in government, and political alienation. This avenue of inquiry is important because scholars have demonstrated that opinions about government have significant effects on political participation and political attitudes. Previous research has shown that Latinos tend to feel less politically effective than other racial and ethnic groups. Additionally, we know little about how political alienation, trust, and efficacy are themselves shaped and formed since we often utilize these measures as explanatory variables, not the outcome for which we want to explain.

In statistical models controlling for education, age, gender, first generation, percent of life in U.S, Spanish dominance, national origin group, and media usage in terms of type and language, our results indicate that proximity to greater numbers of small marches had a positive impact on feelings of political efficacy, whereas exposure to larger protests led to a greater sense of political alienation. Figure 3 below shows that exposure to more small marches reduces the likelihood of agreeing with statements that big interests dominate politics, people have no say in government, and politics is complicated. On the other hand, exposure to large marches had the opposite effect.

Figure 3 – Substantive Effects of protest variables on attitudes towards government 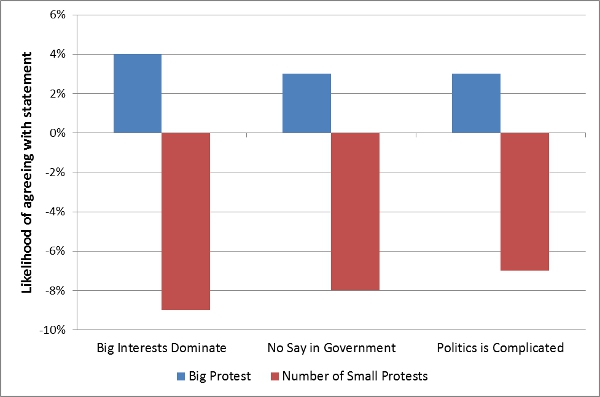 In contextualizing our results with interview data with immigrant rights activists across the country, we argue that the differing effects protests have on attitudes hinge on the types of frames deployed at large versus small marches. Large marches often contained both the mainstream “We are America” frame and a more radical frame that was critical of the U.S. government. We argue the latter frame was more likely to be covered negatively by the media and, consequently, resulted in Latinos having less confidence in our political system. Conversely, small marches often contained a more unified mainstream “pro-American” frame that emphasized immigrant integration and their potential to influence the political process.

Early explanations of social movements portrayed collective political activism as irrational acts by disgruntled individuals that could easily spread to alienated segments of society and threaten democracy. Since then, social movement scholars have established that large-scale collective action is often motivated by political beliefs and a commitment to social justice. As noted by the achievements of civil rights, women’s suffrage, environmental, and other American social movements, mass activism can contribute to producing important policy changes. For the historic 2006 immigrant rights marches in particular, no such legislative change was accomplished. Yet just because some form of legalization was not passed in 2006 does not mean that the national protest wave had no effects. As we have found, the mass marches contributed to producing important changes in Latino public opinion; large-scale immigrant rights activism shifted how Latinos view the U.S. political system and their own abilities to influence the outcomes of government. Activists and policymakers should take note of these findings as they devise their strategies for their current campaign to pass comprehensive immigration reform.

This blog post is a summary of the article ‘Spatial and Temporal Proximity: Examining the Effects of Protests on Political Attitudes’ in the September 2013 edition of the American Journal of Political Science.

A version of this article originally appeared at Latino Decisions.

Michael Jones-Correa – Cornell University
Michael Jones-Correa is a Professor of Government at Cornell University. . He is a co-author of Latinos in the New Millennium (Cambridge, 2012) and Latino Lives in America: Making It Home (Temple, 2010). His current research interests include civic engagement among native-born and immigrants in Philadelphia and Atlanta and ethnic diversity in the suburbs, and its implication for immigrants’ incorporation into local and national politics.

Kyle Scott reviews Why Do We Still Have the Electoral College? by Alexander Keyssar

Anupama Kumar reviews Work Want Work: Labour and Desire at the End of Capitalism by Mareile Pfannebecker and J.A. Smith