While the U.S. began its move away from formal segregation in the mid-1950s, by the 1990s a trend of declining white presence in minorities’ schools had appeared. Jeremy E. Fiel examines these trends, and looks at why minorities are increasingly attending schools with fewer whites. He argues that despite favorable changes in the social and policy factors that affect students’ distribution across schools, demographic changes have been the driving forces in the apparent resegregation of schools in the past two decades. He writes that previous policy measures to encourage diversity in schools may no longer be effective; new ones are needed now to reverse the trend towards increasing minority isolation.

Since the early 1990s, minority students have attended schools with fewer and fewer White peers, so much so that typical Black and Hispanic students in 2010 had fewer White schoolmates than their counterparts in 1970.  This has sparked a contentious debate about the resegregation of American schools.  Many blame courts and policymakers for ending desegregation plans, and research shows that this has increased segregation in some places.  Others, however, attribute these trends to demographic changes rather than resegregation; the increasing share of minorities relative to Whites in the student population makes it inevitable that minorities will attend schools with fewer Whites.

So, have schools resegregated?  The truth is that this is not most appropriate question, because it is not clear what it means.  Segregation means different things to different people, even among researchers who specialize on the topic.  The more important question is whether the increasing isolation of minority students is driven by demographic forces that are beyond the influence of education policy, or whether it is driven by social forces that policymakers can address by determining who has access to which schools. 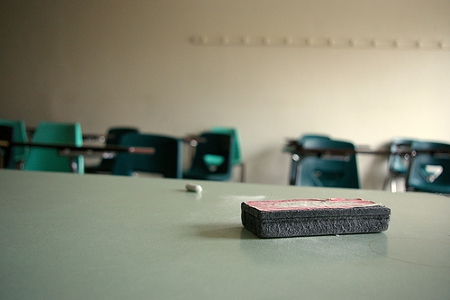 The answer is that demographic processes are largely to blame for the declining presence of Whites in minorities’ schools since the 1990s.  It is also true, however, that local distributive processes continue to play a substantial role in separating White and minority students, and education policies are increasingly ill-suited to address contemporary school segregation.

To better understand the problem, we started with a simple question: how do we know if schools are segregated?  Some people think of segregation in terms of what schools look like (who attends school with whom), but others think in terms of how unevenly groups are scattered across schools.  The former perspective is appealing because students are more likely to be affected by their schoolmates than the distribution of groups across schools.

However, the tendency to assess segregation based on the racial composition of schools can be misleading because it conflates two distinct factors: the racial composition of the student population in an area and the distribution of this population across schools.  The first is driven by demographic processes that have played out over decades, such as large-scale migration patterns and fertility differences across groups.  The second is driven by social processes that usually come to mind when we think of segregation, such as the tendency of Whites to avoid minority students by attending private schools or moving to whiter school zones or districts.

With these factors in mind, we can move beyond debating whether or not schools have resegregated to ask more important questions regarding why minorities are attending schools with fewer Whites and what we can actually do about it.  Answering these questions requires disentangling the demographic processes that shape local populations from the social processes that affect how students are distributed across schools within these areas.

The figure below shows the actual and hypothetical trends for Black-White and Hispanic-White exposure—the percent of Whites in the typical Black or Hispanic student’s school—under this thought experiment from 1993 to 2010.  These calculations are based on all public and private primary and secondary schools in the United States over this time period, which come from data provided by the National Center for Education Statistics. 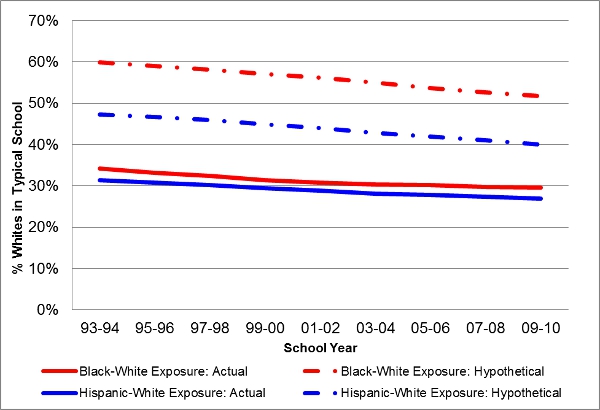 Comparing the solid lines to the dashed lines indicates that, at any given time, the processes generating local racial imbalances across schools make a huge difference in the composition of schools.  Minority students, and especially Black students, would attend school with far more Whites than they actually do if students were distributed evenly within local areas.

By examining the slopes of the lines, we can also tell that the presence of Whites in minorities’ schools declines even in the world where we perfectly desegregate schools within every metropolitan area and nonmetropolitan county in the nation.  Moreover, the presence of Whites in the typical minority student’s school declines even faster in the world where there is no local racial imbalance.  To make this clear, the following chart shows the actual percentage change in Black-White and Hispanic-White exposure from 1993 to 2010 (in gray), the portion of that change that is due to changes in the composition of local student populations (orange), and the portion that is due to changes in local racial imbalances (maroon).  For both Blacks and Hispanics, compositional changes drove the declining exposure to Whites in the 1990s and 2000s, while declining racial imbalance actually helped increase minority-White exposure. 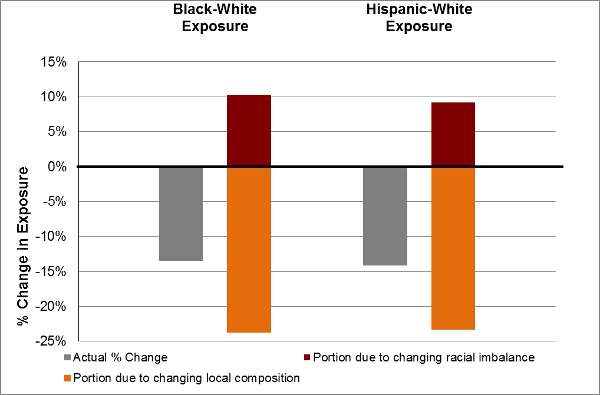 These findings indicate that demographic changes have been the driving force behind the apparent resegregation of American schools, overwhelming what were actually favorable changes in the social and policy factors that affect students’ distribution across schools.  If the racial composition of metropolitan areas and counties throughout the nation had remained constant over the past two decades, and the distribution of students to schools within these areas had unfolded as it actually did, Black and Hispanic students would have attended schools with more White peers.

The full story is more complicated, however, in terms of how particular aspects of the educational system are implicated in the processes that segregate White and Nonwhite students.  For instance, segregation between public school districts in the same area is the largest contributor to contemporary school segregation.  Private schools, charter schools, and imbalances within school districts also contribute, but they play a much smaller role.  This is troubling for those who seek to address school segregation through policy, because most desegregation policies are implemented at the district level, where the potential impact has diminished.  Moreover, there are many legal obstacles to designing policies that address segregation across district lines.  This suggests that we need to envision new ways to address school segregation and find ways to improve schools in spite of minority isolation.

This article is based on the paper, Decomposing School Resegregation: Social Closure, Racial Imbalance, and Racial Isolation in the October, 2013 issue of the American Sociological Review. A pre-print version of the article is available here.

Jeremy Fiel – University of Wisconsin-Madison
Jeremy Fiel is a doctoral student in Sociology at the University of Wisconsin-Madison.  His research focuses on school segregation, promoting healthy development and educational success among disadvantaged youth, and other aspects of educational stratification and mobility.   His recent work has been published in the American Sociological Review and the American Educational Research Journal.