Political polarization in Congress stems from disagreements over specific issues, as much as from partisanship.

Why have American political parties become more and more polarized and divided in recent years? While many commentators blame societal developments such as increasing inequality, or strengthening ideologies, new research by Ashley Jochim and Bryan Jones point towards the role of issue-based polarization since the 1960s, and argue that politics cannot be separated from the policies in which they originate. They write that polarization has not developed in a way that affects all issues equally; issues such as science, foreign trade, business and defense have more dimensions of conflict than issues such as labor, employment, housing and health care.

It’s old news that American political parties are more divided than ever. Why this has happened is less clear, though the trends have occupied more than a few students of American politics (see here, here, and here for some prominent examples).  While these accounts differ in their emphasis – focusing on competing political ambitions, strengthening ideological coherence, or growing levels of income inequality – they share in common an understanding that polarization is driven by phenomena that would be expected to affect all issues equally.

We have reconsidered the sources of growing partisan polarization by examining its evolution across 18 distinctive issue areas since the mid-1960s. We wanted to understand whether growing partisan polarization affected all issues equally or instead, proceeded differently across domains.  We found that while some issues are partisan, others are much more multifaceted, with partisanship being one factor determining Congressional voting preferences.

To do so, we collected data on congressional voting records: how members voted and on what topic.  We then systematically coded these records according to the internationally-recognized Policy Agendas Project’s issue content system so we could reliably identify changes in congressional voting patterns across issues (data are available here).  Finally, we used statistical analysis to decompose the votes in each area into one or more dimensions of choice.  In this case, a dimension represents how members of Congress divide amongst themselves.  If party is what divides them, then Republican members of Congress tend to vote together and in opposition to their Democratic colleagues and analysis will reveal a single dimension of conflict.  If party plays a less significant role, then on some votes Democrats and Republicans will be more alike than different and some secondary (or tertiary) dimension of conflict will be necessary to explain the voting patterns. For example, the issue of agriculture may pit supporters of farm subsidies against critics. But some of the supporters and critics may also favor greater regulation of the nation’s food supply. In this two-dimensional choice space, legislators’ preferences on one dimension (e.g., farm subsidies) cluster together while on the other dimension (e.g., food safety) are dispersed.

The typical research finding based on analysis of all roll-call votes is a single dimension of conflict, which is thought to represent the partisan or ideological preferences of members of Congress (scholars debate which interpretation is correct). The results from our analysis reveal some considerably different patterns. Some of our issues – labor and employment, housing, economics and health care – were characterized, on average, by a single dimension of conflict, as shown in Figure 1, below. But on a diverse range of issues – science, foreign trade, agriculture, public lands, transportation, energy, foreign affairs, business and defense – our analysis revealed two or more dimensions on average. 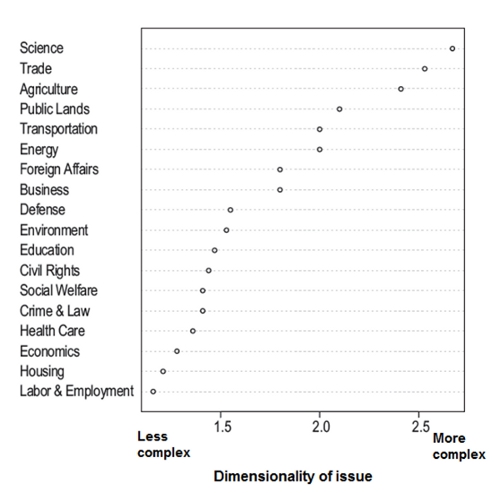 To understand how these differences in dimensionality have changed over time, we divided the series into two periods – an early period (1965-1980), allegedly characterized by weaker legislative parties, more bipartisanship and a stronger committee structure, and a later, more partisan era characterized by weaker committees, stronger parties and more polarization (1981-2004). This dimensionality over time is shown in Figure 2. 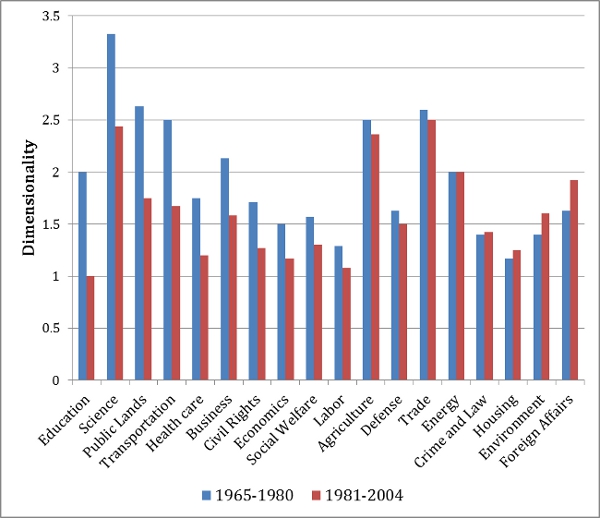 Consistent with the narrative of increased polarization, some issues are characterized by fewer dimensions in the contemporary period including education, science, public land, transportation, and health care. Still others, such as the environment and foreign affairs exhibit increases, though these differences are not statistically significant.  These changes in observed dimensionality appear to be driven by increasing levels of partisanship – in education, the average vote revealed few divisions between the parties (only about 22 percent of the parties’ members voted in opposition); in the later era, the average vote was a “party vote,” meaning that at least half of each party voted in opposition.

But the trend towards greater polarization did not unfold in other issue areas. Some issues were always low dimensional and reflected strongly partisan divisions between members of Congress.  These did not change much – labor, social welfare, and economics became only marginally more polarized over the period in question.  But several issues, including agriculture, defense, trade, and energy remained more multifaceted despite the trend towards greater partisanship reflected in the aggregate data.

These results suggest that some issues were and probably will always be partisan; other issues have evolved from largely multidimensional spaces, where partisanship was just one of many possible structures to organize choice, to unidimensional ones.  Still others seem to be highly resistant to the trend toward greater partisanship.

The key to this issue-by-issue polarization lies in the process of issue definition, and in particular the increasing tendency of political actors to view formerly distributive issues as redistributive ideological ones. In the 1960s and 1970s, the rise of new issues previously beyond the scope of government action including civil rights, education, health care, crime and the environment resulted in a large expansion of the congressional agenda.  Our analyses suggest few of these issues polarized the political parties immediately. Rather, it was later, as efforts to implement specific policy initiatives revealed the full range of regulatory and/or redistributive actions implied by the initial legislation that polarization seems to have increased.

Most current analyses of increasing polarization in Congress stress external factors, such as the Southern realignment toward the Republican Party and the increasing threat of Republicans to primary challenges.  We do not disagree, but explanations that avoid what policies divide the parties will always be incomplete.  Politics cannot be separated from policies in which they originate.

This article is based on the paper “Issue Politics in a Polarized Congress” in Political Research Quarterly.

Bryan Jones – University of Texas at Austin
Bryan Jones is Professor and J. J. “Jake” Pickle Regents Chair in Congressional Studies in the Department of Government at the University of Texas at Austin. his research interests center in the study of public policy processes, American governing institutions, and the connection between human decision-making and organizational behavior.