Technology-focused critiques of Obamacare are distracting from the political sabotage of the program by congressional Republicans.

With the recent end of the U.S. government shutdown, political attention has moved on to the glitches encountered in the rollout of health insurance exchanges at the state and federal level, as part of the Affordable Care Act. While many commentators have damned the Department of Health and Human Services for the ‘failed’ and ‘disastrous’ launch of the exchanges, Philip Rocco argues that these difficulties must be seen in the context of the inherent complexity of the system, the high public expectations for it, and the continuing efforts by congressional Republicans, business organizations, and the Tea Party to under-fund and undermine the program.

Americans fetishize failure. Silicon Valley alone has produced a lexicography of “glitch” rich enough to fill a Thomas Pynchon novel. Public policy is no exception. At the first sign of weakness, opponents of the Affordable Care Act, and other misguided critics, were eager to refer to technical glitches in the rollout of the federal exchange as a failure, a disaster, and a crisis – and all at the hands of the “incompetent” Department of Health and Human Services (HHS).

But it’s not that simple. Calling the HHS’s work at implementing Obamacare a “failure” or a “disaster” is more than just getting the history wrong; it is a style of critique that prevents us from seeing how antipathy to the state produces administrative burdens which provide an empirical base for opponents of “big government” to draw on. At a moment when consumers have been convinced that government should work like a high-tech business, decreasing resources for public agencies to achieve their missions and a climate of conservative extremism threaten to prevent government from performing critical tasks like improving the quality of healthcare. Technological critiques of “disastrous incompetence” only add fuel to the fire. 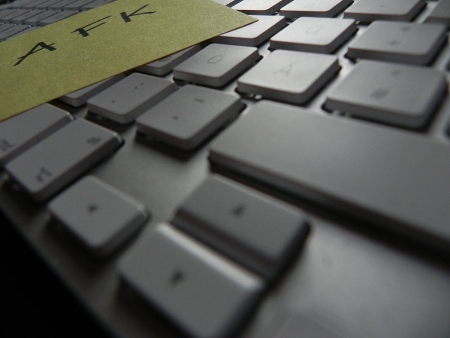 From a consumer’s standpoint, the technical rollout of Obamacare’s market-style programs may be problematic. Millions of uninsured individuals have had difficulty accessing a clunky, difficult-to-maneuver website with countless technical glitches. But how many glitches make a disaster?

The word “disaster” implies not just difficulty achieving an improvement of the status quo, but a definitive worsening of it. If Obamacare were a disaster, glitches in the federal exchange might lead to paralysis or death. “Failure”, too, implies a different set of consequences: a near-total incapacitation of normal operations and an inability to do on-the-spot learning or adjustment. The inability of regulators to recognize systemic market risks in advance of the 2008 financial crisis was widely perceived as a failure, and rightly so, since the development of increasingly complex financial products––coupled with regulatory drift––compromised their normal risk-assessment procedures.

Even on technologists’ own terms, the rollout of Obamacare could not be more different than these worst-case scenarios. Less than one month into the implementation of this massive intervention into health-insurance markets, individuals are in fact successfully signing up for insurance on the federal exchange and in the largely Democratic states like Washington or Connecticut that decided to run their own health-insurance marketplaces. The HHS is dealing with largely fixable “glitches”, but continues to face a service geography in which consumers demand a complex product, delivered quickly and in which highly motivated political actors are working to turn individuals away from enrollment in the program. Technological critiques ironically assume away these complex challenges. Creating and maintaining a health-insurance marketplace is not as easy as sending Social Security checks to seniors. Rather, it involves connecting individuals with a diverse range of service options, gathering and integrating vast amounts of information about eligibility, health status, and market rates. Add to that the increasing expectations of Obamacare’s clientele for service that is immediate and individually tailored to suit consumer preferences. Social Security it isn’t.

What’s more, as American consumers’ demands for “high-quality government” have increased, their willingness to give government the capacity to carry them out has not. In fact, government capacity has been diminished as part of a concerted effort by Republicans to sabotage the health law––not by voting to formally defund it, but through more a subtle strategy of obstruction. The design of the Affordable Care Act, heavily influenced by Republicans before they cut and run, gave substantial incentives to the states to create their own exchanges. Simultaneously, due to conservative fears of an activist federal government, Congress deliberately under-funded federal implementation activities, asking HHS to create the federal exchange with cash scraped together from its $1 billion healthcare implementation fund. By contrast, Congress provided states unlimited funds to set up their exchanges. At first, this approach seemed unproblematic, but Republican governors quickly began to exploit the design for political gain, refusing to implement exchanges and declining to expand the Medicaid program. As Maine’s governor, Paul LePage put it November of 2012: “I’m not lifting a finger…We’re going to let Mr. Obama do a federal exchange. It’s his bill.”

Fluctuations in the technical requirements for the federally funded exchanges have made policy implementation a snarl. By the spring 2013, all but two states with unified Republican governments had declined to develop their own exchanges, placing dramatic new demands on the HHS to collect information to build a nationwide exchange and to market it to individuals in states with strong political opposition to the law (see Table 1). While the HHS has attempted to cobble together cash from other funding sources, congressional Republicans have repeatedly denied the HHS’ requests for adequate funds to carry out this task. They have instead created a polarized environment in which bureaucrats at HHS had strong incentives to hide technical problems with the federal exchange for fear that a leak would cost them dearly in public support. 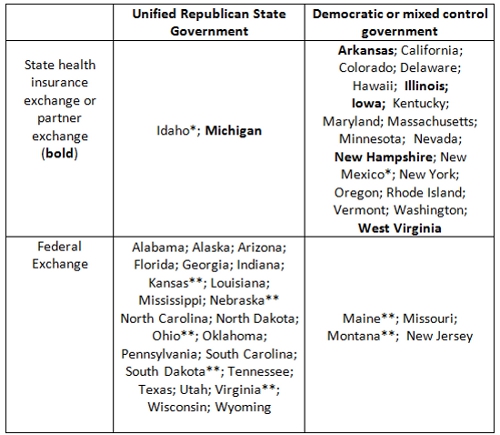 Note: * Indicates that a state has approval from HHS to run a state-based exchange, but is temporarily working with the federal government on implementation due to time constraints or technical difficulties; ** Indicates that a state has received approval from HHS to conduct plan management activities to support certification of qualified health plans in the federally-facilitated exchange.

Partisan conflict does not let the HHS off the hook for an inelegant interface and for persistent technical glitches. But blaming federal bureaucrats misunderstands the politics of administrative structure and assumes a level of heroism in the face of adversity that we demand from very few human enterprises. At worst, it also minimizes the efforts of public servants and asks them to be resilient to an increasingly impossible political terrain. Do we really expect government to perform like a high-tech travel website when we fund it as if accomplishing that goal were a simple matter of hiring a few web developers? More importantly, how can public servants cope with an environment of increasing political polarization in which “best practices” for carrying out public policy are deliberately sabotaged by their opponents in Congress?

If our debate about Obamacare continues to focus on “incompetent bureaucrats”, we’ll never be able to answer these questions. Nor will we be able to develop effective strategies for managing in a world of fewer funds and more demands. By casting the federal government’s efforts as a disaster from the outset, technology-focused critiques distract us from the political forces that created (and are helping to sustain) these governing challenges in the first place: congressional Republicans, business organizations, and the Tea Party. And that is a malfunctioning of criticism.