This week saw a narrow win for Democrat Terry McAuliffe over his Republican rival Ken Cuccinelli in the Virginia gubernatorial election. Toni-Michelle C. Travis takes a close look at the election results, writing that McAuliffe had considerable success in more liberal and densely populated Northern Virginia. She argues that facing a Republican General Assembly, and a split Senate, McAuliffe now needs to build relationships across both parties, and that the GOP must work towards greater unity between the Tea Party and traditional Republicans.

After a costly and sometimes rancorous campaign, Democrat Terry McAuliffe won a narrow victory over Tea Party favorite Ken Cuccinelli to become the governor of Virginia.  Winning the governorship by 47.9 percent to 45.5 percent with Libertarian, Robert Sarvis taking only 6.6 percent of the votes, McAuliffe broke a 36 year pattern of the governor of Virginia being from the party opposite to that of the president.

As McAuliffe becomes the 72nd governor of Virginia, many are questioning how he will fulfill this role, which such men as Patrick Henry and Thomas Jefferson had occupied.   As the maps of Virginia’s election results indicate, McAuliffe did very well in the urban areas, specifically in northern Virginia, Richmond, and the Hampton Roads area. Statewide races now pit the voters of Northern Virginia (NOVA), against the rest of Virginia, (ROVA), as Figure 1 illustrates.

Cuccinelli, the former Attorney General, never wavered from his extremely conservative positions on abortion, same sex marriage, and gun control.  In the last days before the election he brought in Senators Marco Rubio of Florida and Rand Paul to appeal to his Tea Party base.

Candidates for Virginia statewide office do not run as a ticket. The race for lieutenant governor was won by the Democrat Ralph Northrum, a physician.  He beat republican E.W. Jackson 55 percent to 45 percent. This win is significant because the lieutenant governor will cast the tie breaking vote in Virginia’s 50/50 split senate.

Voters are still anticipating the final tally for the attorney general’s race and will have to wait for the counting of all provisional and absentee ballots.  Currently, Republican Mark Obenshain has 50 percent of the vote, as does Democrat Mark Herring.  A mere 17 votes are estimated to separate the candidates.  This leaves open the possibility that the attorney general will be a Republican when the governor and lieutenant governor are Democrats.

Virginia remains a swing state with a decidedly more liberal tilt in urban areas than in rural areas. While this trend is seen throughout the U.S., in Virginia densely populated NOVA tends to vote Democratic (Figure 2 below), while ROVA tends to vote Republican. Northern Virginia counties such as Prince William and Loudoun County continue to grow because job opportunities are drawing new out of state residents.  Every election has new voters who were not here four years ago.  Since the last gubernatorial race the area has become “less white and less republican”.

McAuliffe’s win was fortuitous.  He outspent Cuccinelli by $13 million, which allowed him to keep his negative ads on television until Election Day.  Cuccinelli was weakened when rumors that the popular outgoing Governor McDonnell might be indicted kept McDonnell from joining the campaign. Finally, the federal government shutdown hurt many Virginia residents financially and led Virginians to blame Republicans for their suffering. After workers returned to their jobs, most blamed Senator Ted Cruz’s polarizing politics for the closure.

In January McAuliffe becomes a lame duck governor as soon as he is sworn into office because Virginia remains the only state that does not allow its governor to serve two consecutive terms.  This might auger for a bold agenda, but McAuliffe faces a number of initial problems. An immediate negative is that he has never been a member of that gentleman’s club also known as the General Assembly. He needs to build relationships with individual members in both parties. When the General Assembly convenes in January 2014, the new governor faces a Republican majority in the House of Delegates and a senate split between twenty Republicans and twenty Democrats.

McAuliffe announced during his first press conference that he has enlisted the support of former Republican congressman Tom Davis of northern Virginia and former Republican state senator John Chichester. As the former chair of the Senate Finance Committee, Chichester will be invaluable in explaining budgetary politics.  However, as Davis said of Chichester, “It’s rent-a-Republican.  I think he’s on everybody’s Republicans-for-Democrats list.”

Stricter campaign ethics will be addressed in the next legislative session. McAuliffe must be careful to observe future laws because of his well-developed network with big campaign contributors. His position will be scrutinized regarding connections with lobbyists who support his legislative initiatives, including potential incentives to bring new business into Virginia.

McAuliffe may have trouble promoting his agenda for more money for transportation, education, mental health, and the Affordable Care Act due to Virginia’s fiscally conservative nature. Obtaining legislative approval for additional transportation money will be difficult because republican Governor McDonnell just signed an $3.4 billion transportation bill that was 27 years in the making.  The General Assembly’s urban/rural divide will continue as funding for transportation will continue to be inadequate in urban areas.

Both political parties must reassess their positions.  McAuliffe is an incoming governor with the support of two Virginia democratic senators and the president.  He will play a pivotal role in 2014 congressional and 2016 presidential elections, especially if Hillary Clinton is a candidate for president.  Republicans must work for unity between the Tea Party and the traditional Republicans. McDonnell is ending his term under a cloud of ethics accusations and polarizing Cuccinelli has just lost an election that might have been won by a moderate Republican. Therefore, Virginia Republicans need a party leader.

Virginia voters can be idiosyncratic.  While we may think that this election tells us how the country will vote for congress in 2014, the implications may be limited solely to how Virginians think.  The signals that we do get from this election are that women will vote, especially when they feel that their rights are being abridged. A more moderate position with less attention to moral issues would have a wider appeal with voters. We can also see that extreme conservative politics will cause some voters to stay at home or vote democratic. 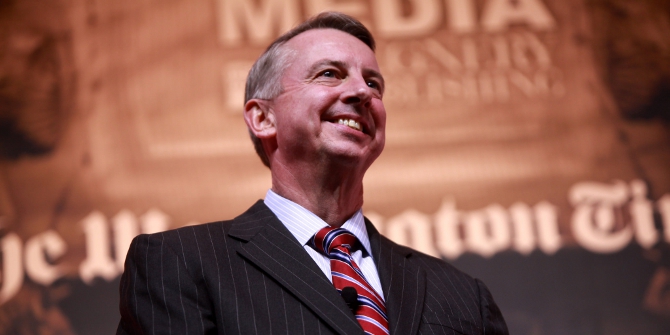