In international negotiations, it is often accepted that powerful states, by way of their large militaries and market power, can easily extract concessions from weaker ones. Drawing on examples from international negotiations, Heather Elko McKibben challenges this belief, arguing that structural factors, rather than base power dynamics, often determine success in negotiations. She recommends that state leaders consider these contextual features to improve their bargaining positions.

Bargaining is one of the central ways that states work to achieve their policy interests in the international system. The strategies states use when doing so varies quite widely, both from state to state and negotiation to negotiation. States sometimes make concessions to their bargaining opponents, and they sometimes refuse to do so. Who will concede and who will refuse to concede, and what will be the extent of the concessions that are made?

The most prevalent explanation we tend to turn to is that states can use their “power” as leverage to extract concessions from weaker states. We tend to think of power in terms of military and economic resources – with the expectation that states with bigger militaries and larger market power are able to best achieve their interests when bargaining, while weaker states are forced to make concessions to these more powerful states. For example, we would think that United States, China, Russia, India, and Japan would be likely to win in negotiations against smaller, weaker states. 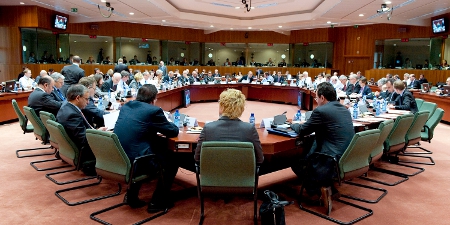 Credit: Council of the European Union

However, there are many international negotiations in which this is not the case. For example, the United States made significant concessions to the developing states on the issue of intellectual property rights in 2001, agreeing that these states could violate patent rights under certain conditions related to public health. The United States did so despite strong opposition to such an agreement from its own pharmaceutical industry. The question thus arises: why would the more powerful United States offer concessions to the weaker developing countries in these negotiations?

The answer lies in the fact that differences in states’ bargaining strategies can be best explained by variation in, what international relations scholars refer to as, the “structural” facets of states’ bargaining interactions. These structural factors stem largely from the context of the negotiation itself, rather from states’ military and economic capabilities. The incentives and constraints of the bargaining context shape the strategies both powerful and weak states are motivated to adopt.

Two structural facets of a bargaining interaction which are likely to affect states’ strategic bargaining behavior are (1) the set of issues on the table, and (2) the outcome that each state will have to face if they are unable to reach an agreement.

First, if opposing states want to win on different issues that are on the bargaining table, they can trade across these issues and an agreement is thus likely to be reached. However, if states are fighting over the same point that they each consider most important for them to win on, neither side is likely to concede—even if other issues are on the table.

These effects hold for both “powerful” and “weaker” states. While there are numerous specific examples that can be cited to back up this argument, these effects can be demonstrated, more generally, through a statistical analysis of a wide variety of negotiations between the states of the European Union (EU). In these negotiations, we typically think of France, Germany, and the United Kingdom, with their large economies and populations, as the most powerful states in the EU. However, international relations scholars have shown that “weaker” EU states are often able to win out over these more powerful states. A statistical analysis of these bargaining interactions can help us to better understand the importance of structural factors in international bargaining, and thus why more “powerful” states might lose out to their “weaker” bargaining opponents. [Click here to access the data used.]

Figure 1 shows the effect of variation in the set of issues on the table in these EU negotiations on the concession-offering behavior of states with both significant and few material capabilities. If opposing states want to win on different issues on the table, both powerful and weak states are highly likely to offer concessions. In contrast, if opposing states are fighting over the same issue on the table – i.e., they do not value the issues differently – both powerful and weak states are very unlikely to offer concessions.

Figure 1: Effect of the Degree Issues are Valued Differently by States Compared to Effect of States’ Material Capabilities on Concession-Making 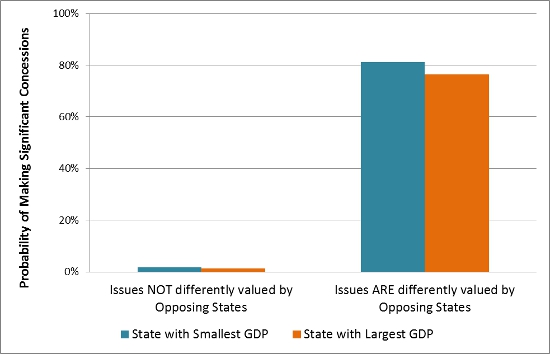 Figure 2 shows the effect of variation in the beneficial/costly nature of the no-agreement outcome for each state.  It does so by comparing these effects to those associated solely with a state’s material capabilities. States are more likely to offer significant concessions to the other side if the alternative to agreement that they face is fairly costly – regardless of their economic power. In contrast, states are not likely to give in if their alternative to agreement is better than that of their opponents – thus being able to receive concessions from their worse-off counterparts.

Figure 2: Effect of Value of a State’s Agreement Alternative Compared to the Effect of Its Material Capabilities on Concession-Making 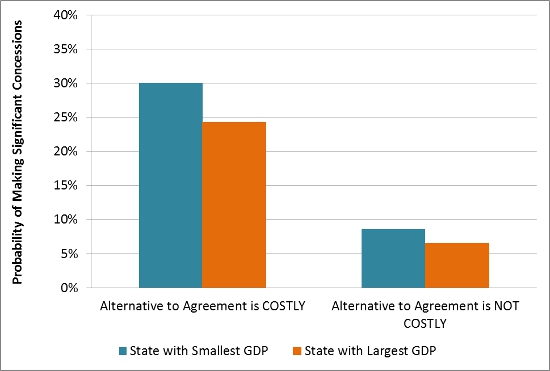 The policy implications that stem from these results are clear. State leaders need to understand the “structure” of the bargaining interaction – i.e., the context within which they are interacting. By working to manipulate that structure in their favor, both materially “powerful” and “weak” states can improve their bargaining position vis-à-vis their bargaining opponents.

In some cases, military and economic power can be used to do so. For example, think about the current negotiations underway between the “big powers” and Iran over its nuclear program. To try to force the hand of Iran and force it to halt its pursuit of nuclear technology, the United States has worked through the United Nations to place economic sanctions on Iran, with Israel even threatening to potentially use military force against it. Both of these moves potentially alter Iran’s no-agreement alternative by imposing costs on it for not conceding and agreeing to halt this pursuit of nuclear power. If these costs are high enough, Iran might potentially be willing to make such a concession—at least, this is what the United States and other “big powers” are counting on.

However, using economic sanctions and military threats which exploit a state’s material power is not the only way to alter the bargaining structure – nor is it necessarily the best. For example, in the 2001 Doha negotiations, developing countries framed the issue of intellectual property rights in a new way – leading domestic constituencies in their own states, as well as the domestic public in the United States to think of these issues in terms of health concerns rather than in terms of fair trade. By doing so, they increased the domestic political and reputational costs that the U.S. government would face if it refused to sign on to an agreement “designed to protect public health.” These “weaker” developing states were therefore able to win concessions from the United States on this important issue. This structural explanation therefore helps to explain the “puzzle” posed at the beginning of the article regarding why the more “powerful” United States would make concessions to these developing states.

State leaders therefore need to consider the contextual features of an upcoming or ongoing negotiation, and think about how they might be able to change them to potentially improve their bargaining position. Doing so can exert important effects on their ability to win concessions from other states and best achieve their interests, overall.

This article is based on the paper, The Effects of Structures and Power on State Bargaining Strategies in the April 2013 issue of the American Journal of Political Science.

Note:  This article gives the views of the authors, and not the position of USApp– American Politics and Policy, nor of the London School of Economics..

Heather Elko McKibben – University of California, Davis
Dr. Heather Elko McKibben is an Assistant Professor of Political Science at the University of California, Davis.  Her research seeks to better understand when, why, and how states are able cooperate with each other, with a focus on addressing these issues in the context of negotiations that take place between states.