With only two major political parties in the country, both the Republican and Democratic Party face the challenge of unifying ideologically diverse constituencies around a single presidential candidate. Using social network analysis, Andrew Dowdle and Song Yang inspect the behavior of individual donors during primary and national elections to examine cohesiveness within the two parties. Their work shows that the Democratic Party tends to be more unified compared to the Republican Party, even in years when it lost the overall election.

During every presidential election, pundits and political prognosticators speculate about how the Republicans and Democrats could possibly unify different factions of their respective political parties behind the presidential nominee following the, often acrimonious, conflict of the primary season. And in the aftermath of every election, commentators and analysts bemoan the future of the losing political party, claiming the election was not only a reflection of a contentious process, but also a divided party. Our recent work, The Invisible Hands of Political Parties in Presidential Elections: Party Activists and Political Aggregation from 2004 to 2012, co-authored by Andrew Dowdle, Scott Limbocker, Karen Sebold, and Patrick A. Stewart, seeks to shed light on the health of the American political parties by examining the behavior of individual donors. This allows us to move beyond the claims of experts and beltway insiders to directly analyze the people who “put their money where their mouth is” in support of political parties and their presidential candidates.

Drawing from an extensive Federal Elections Commission database comprised of well over one million donors during the 2004, 2008, and 2012 presidential elections, we use social network analysis to reveal the preferences of the elite subset of donors that arguably define political parties through their giving. More specifically, we have looked at which donors gave to multiple candidates during the presidential pre-primary season, and then considered their willingness to donate to the eventual nominee. This study of multiple donor networks during the nomination stage of presidential elections has revealed a more unified Democratic Party when compared to the Republican Party, even when the Democrats lost in 2004. 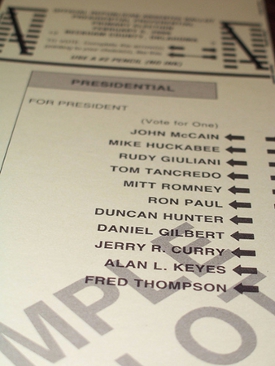 The modern American political party consists of a diversity of ideas and interests, represented by both the variety of candidates contesting the two parties’ presidential nominations and by the donors that back them. By using donors to the various candidacies as a proxy to measure support within the party for a given candidate and the ideas that candidate represents, one can infer the status of various interests within the political parties. But the utility of the donors does not end there, since donors to political campaigns are not limited to giving to just one candidate. The donors that contribute to multiple campaigns provide valuable insight into how partisans that possess multiple interests reconcile these diverse preferences and how parties aggregate support across an electoral cycle.

Network analysis of the 2004 Democratic Party preprimary, shown in Figure 1 below, suggests that there may have been a policy split amongst donors concerning the Iraq War, with two competing camps of support (John Edwards and Richard Gephart) and opposition (Howard Dean, Wesley Clark, and John Kerry) to the intervention. However it also shows the party reached unity amongst these core candidates relatively easily, followed by lesser from support the follower of the other, minor candidates (Joe Lieberman, Bob Graham, Dennis Kucinich, Carol Mosely-Braun, and Al Sharpton). 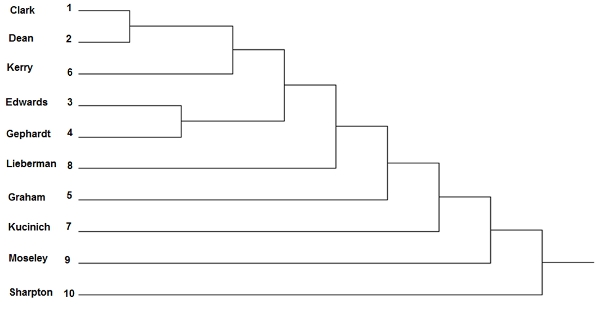 This pattern of convergence occurs again during the 2008 Democratic preprimary (shown in Figure 2) where, despite a highly competitive field of contenders, the network of party donors giving to multiple candidates showed a unified party with a perfect stepwise clustering pattern. Specifically, the three front-runners are those clustered closest together (Hillary Clinton, Barack Obama, and John Edwards), and are followed by the other candidates (Joe Biden, Bill Richardson, Chris Dodd, Dennis Kucinich, and Mike Gravel) in order, suggesting distance from an agreed upon central core. 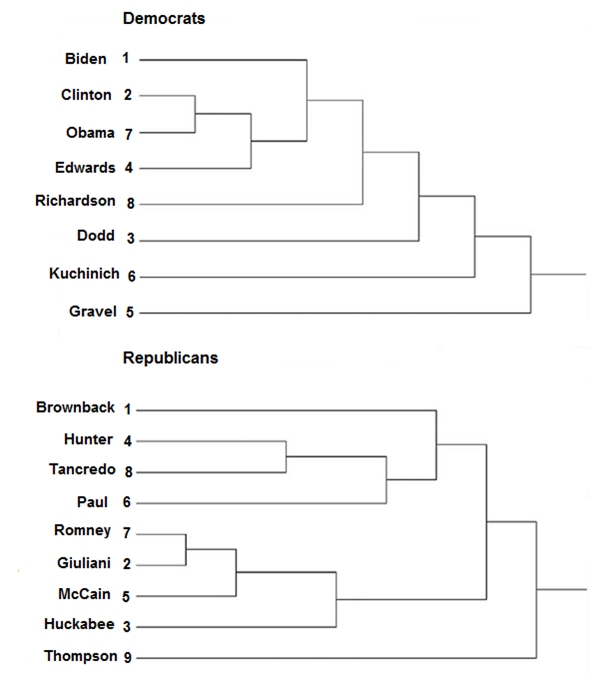 The Republican Party provides a case in contrast. Despite having relatively uncontested primaries with nominees emerging earlier in the electoral process than did the Democratic Party in 2004 and 2008, network analysis of preprimary donor activity reveals standing schisms in both the 2008 and 2012 electoral cycles for the Republican Party. In the 2008 preprimary two distinct camps emerge, one comprised of mainstream candidates (Mitt Romney, Rudy Guiliani, John McCain, and Mike Huckabee), the other a more isolated cluster (Duncan Hunter, Tom Tancredo, Ron Paul, and Sam Brownback). This pattern of division was repeated and exacerbated in the 2012 election (Figure 3) as the Republican preprimary saw shared donations grouping into traditional Republican candidates (state governors such as Romney, Rick Perry, and Jon Huntsman), Tea Party favorites (Michelle Bachmann, Herman Cain, and Newt Gingrich), and libertarians (Ron Paul and Gary Johnson). The final major candidate to cluster, Rick Santorum, suggests that there is yet another potential division, made up of religious conservatives, within the party. 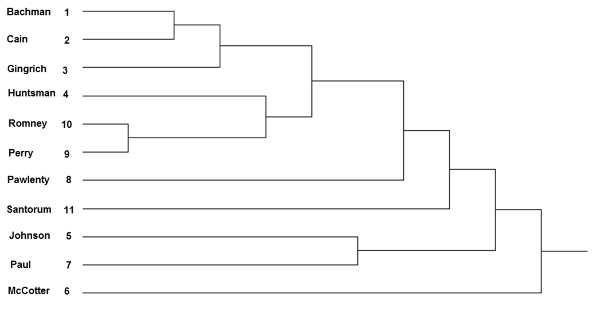 In many ways, best raw numbers demonstrate the differences not only between parties but also explain trends in aggregation within both organizations. We believe this can be taken a step further when comparing the relative totals of the 2007 and 2011 Republican contests in illuminating why Romney had difficulty building a winning coalition in 2012. Romney shared more donors with Rudi Giuliani in 2007 than he did with the entire field of 2011. Also, his strongest pairing, with Rick Perry, was only a total 269 donors. Comparing that to Obama and Clinton total in 2007, it is smaller by more than an 8:1 margin. Romney did have more success than McCain in 2008 in wooing back donors in the general election. However, he only got support from 7,940 donors who gave to other candidates in the 2011 preprimary season. By contrast, Obama was able to win the backing of more than 13,000 pre-primary donors in 2012.

In conclusion, when there is a race between the two national political parties, the relative unity of each party becomes important in not only determining the eventual winner of the presidential contest, but also in defining the health of the party and the potential directions for change. Our social network analysis of multiple donors allows the multiple shared preferences of partisans to be revealed in a manner not used before; at the same time, it provides insight into the fragmentation and coalescing of interests that define a political party. In an era where partisan activist mobilization is a key to victory, party leaders will need to pay more attention to engaging all elements within their networks. How this dynamic evolves over time likely will correspond with the success—or lack of it—of the political parties in future presidential elections.

This article is based on the book, The Invisible Hands of Political Parties in Presidential Elections: Party Activists and Political Aggregation from 2004 to 2012 which was published in June , 2013 by Palgrave Macmillan, and on the paper, Party cohesion in presidential races Applying social network theory to the preprimary multiple donor networks of 2004 and 2008 in Party Politics.

Andrew Dowdle – University of Arkansas
Andrew Dowdle is the outgoing editor of the American Review of Politics and the Vice-Chair of the Department of Political Science at the University of Arkansas. His research interests include campaign finance, behavioral patterns of political donors and the evolution of the U.S. presidential nomination process.