The ballot is one of the most fundamental implements of democracy – but can ballot design influence the outcome of an election? Chris W. Bonneau and Eric Loepp find that ballots that give voters the ability to vote for all candidates with the same party label (the straight-ticket voting option) in multiple elections may have major consequences for electoral participation, especially in ‘down-ticket’ races. They argue that while straight ticket voting may enhance participation in these races if they are partisan, non-partisan ‘down ticket’ races are much more likely to see reduced voter participation.

In recent decades a number of American states have eliminated the straight-ticket voting option (STVO) – a box on ballots voters can check to vote for all the candidates in multiple concurrent elections running under a particular party label – from their ballots.  Several more states are considering this change as we write.  Some praise the move as one that forces citizens to learn about candidates rather than relying on solely on party labels.  But what does this move mean for voter participation in elections where the public tends lack knowledge of candidates, and are most in need of the assistance party labels provide?

Our research looks into the intersection of ballot design and electoral structure to assess the effects the STVO has on participation in so-called “down-ticket” races about which the public knows far less than it does for “top-of-the-ticket” races.  We argue that the STVO has a positive effect on participation in partisan races but has a negative effect on participation in nonpartisan races (where the party affiliation of those running is not listed on the ballot).  We find that there is an important basis for discussing the consequences – both positive and negative – of states eliminating the STVO. 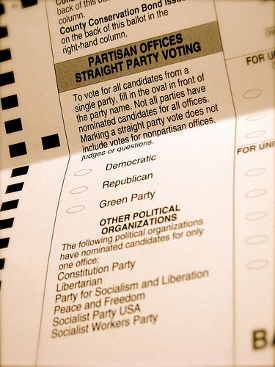 Voters, by and large, tend not to be particularly informed about elections, especially local and state elections which receive considerably less media attention than national races.  Citizens who wish to participate in politics must obtain information about the candidates in order to make an informed choice.  Yet this information is costly – it takes time and energy that could be spent doing other things.  As a result, voters tend to rely heavily on party labels (such as Democrat or Republican) when they go to the polls.  Even without knowing everything about a candidate, a voter can look at a candidate’s party label and infer a general ideology and policy preferences.  Thus the voter can be somewhat informed without expending a lot of energy learning about candidates.

The straight ticket voting option functions in a similar way as the party label.  Imagine you are a citizen entering the voting booth.  Many Americans face this situation when they go to vote: when they look at the ballot they encounter dozens of offices requiring a vote, often including for the judiciary, Lieutenant Governor and Attorney General (‘down-ticket’ races). Even the best informed voters cannot possibly be well-informed about all of the candidates.  Yet what if there was a straight-ticket option at the top of the ballot which allows you to simply select which party you prefer and vote for all of that party’s candidates in all races?  Voters can use the STVO like they use the party label – it makes things far simpler but still gives you a sense that you voted “accurately,” or for the candidates you think you would prefer.

The Asymmetric Impact of the STVO in Judicial Elections

A potential problem with using the STVO as a cost-cutting device is that in reality many (around 50 percent) state and local elections are nonpartisan in nature.  Candidates are not listed with party labels on the ballots.  In these races, the STVO will not register a vote for a candidate.  We argue that when the STVO is on ballots featuring nonpartisan races, participation in those nonpartisan races will decrease.  This is likely because many voters who select the STVO may forget that this does not record a vote for nonpartisan offices; that is, they accidentally roll-off.  This is not the case when the STVO is not present in nonpartisan elections.  Here, voters may not participate because of voter fatigue or because they don’t have enough information on candidates (ignorance), but it wont be because of accident.  So, the STVO in nonpartisan elections adds another potential cause of voter nonparticipation into the mix.  On the other hand, when the STVO is available on ballots featuring partisan down-ticket races, participation should increase.

We looked at the impact of the straight ticket voting option on ballot roll-off, using data from 319 judicial elections from 1990 to 2008.  Judicial races are ideal for this analysis because some states have partisan elections while others have nonpartisan elections.  Moreover, states also vary in that some offer the STVO and others do not. This measure of participation is simply the difference between the percentage of people who turn out to vote on a top-of-the-ticket race and people who turn out in the judicial election.  For instance, if 100 people vote in the presidential race and 80 of those people also vote in the judicial election, then ballot roll-off is 20 percent.  We use this measure instead of pure turnout because, as with other down-ticket races, voters do not show up to the polls to vote for judges; instead, they turn out to vote in the top-of-the-ticket races and then decide whether to participate in the down-ticket races, as well. 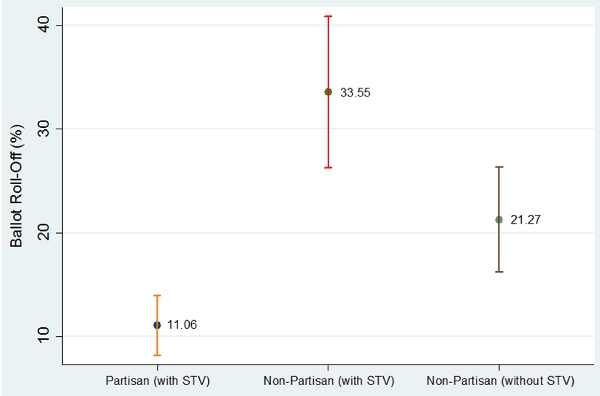 Our findings reflect some startling differences in participation depending on the type of election and the design of a ballot in a given state.  When party information and the straight ticket voting option are available, roughly 9 out of 10 voters will stick around after the top-of-the-ticket races and finish their ballots.  When that party information is taken away but the STVO remains, fewer than 2 out of 3 voters will complete their ballots.

The results suggest several phenomena may be influencing voter participation when they go to the polls.  First, roll-off may occur because voters become fatigued: by the time they reach the judicial races they have voted in so many offices already that they simply cannot be bothered to invest more time in the process.  Second, roll-off may stem from ignorance: voters may reach the down-ticket races in which they know little if anything about the candidates and choose not to vote because they lack enough information to do so.  Third, roll-off may occur by accident.  It may be that some voters use the STVO and do not realize that in doing so they have skipped the nonpartisan offices.  How a state structures its elections and ballots can impact which of these processes—if any—may be affecting voters.

The results also speak more generally to the benefits and consequences surrounding the use of ballot options like the STVO and partisan versus nonpartisan elections.  For instance, if a state with the STVO is considering a move from partisan to nonpartisan elections, policymakers should know that this change will result in dramatically lower levels of participation in those elections.  On the other hand, since the STVO bolsters participation in partisan down-ticket races, some states may feel that the loss of some participation in the nonpartisan elections is offset by gains in other races.  While our goal is not to settle the debate over adopting a certain type of election or ballot, our results show that there are considerable consequences to how states design both their electoral systems and their ballots.

This article is based on the paper, Getting Things Straight: The Effects of Ballot Design and Electoral Structure on Voter Participation, in Electoral Studies.

Eric Loepp – University of Pittsburgh
Eric Loepp is a graduate student in the University of Pittsburgh’s political science department. His specific research interests are largely electoral, including economic voting, candidate evaluation and participation in general.  He is particularly interested in how voters use and seek information about candidates in (1) low-information environments, especially intraparty competition (e.g. primary elections) or (2) conflicting-information environments (e.g. when multiple cues candidates provide are incongruent).