As the government shutdown in October showed, the U.S. is currently in a period of deep political division. Using data collected from in dozens of U.S. Senate races between 1996 and 2006, and 50 U.S. House races in 2006, Jon Rogowski examines the effect of this partisan polarization on electoral behaviors. His results suggest that increasing policy differences between candidates significantly reduces voter turnout, particularly among citizens with lower levels of education and political knowledge.

As the recent congressional debates over the federal budget and debt limit underscore, contemporary American politics can hardly be discussed without some reference to partisan polarization. As others have pointed out ( for example here, here, here, and here), estimates based on congressional roll call voting patterns show that the national parties are more ideologically distinct than they have ever been.

Generations of scholars and observers might agree that this development is a good thing for American democracy. More than sixty years ago, the American Political Science Association’s Committee on Political Parties issued a report in which they urged the two major policies to better distinguish themselves and therefore present the public with a “true choice” on the major issues of the day. Decades earlier, Woodrow Wilson, James Bryce, and others expressed similar views, arguing that “the two parties so far agree that we cannot now speak of any conflict of principles.” As justification for their recommendations, the APSA committee argued that ideologically distinct parties would increase the public’s involvement in the democratic process and enable them to hold parties more accountable for their performance in office. On the latter question, David Jones finds that increased polarization in Congress contributes to greater electoral accountability for congressional performance. But conclusions about how party polarization has affected the mass public have been decidedly more mixed. Work by Marc Hetherington and Matthew Levendusky suggests that polarization improves citizen decision-making by making it easier for voters to choose the party or candidate whose policy platform best reflects their own beliefs, while recent work by Jamie Druckman, Erik Peterson, and Rune Slothuus finds that elite polarization reduces the quality of the public’s opinions. Alan Abramowitz and Kyle Saunders further conclude that party polarization has increased the public’s political engagement and voter turnout, but Morris Fiorina argues that polarization has led much of the public to withdraw from politics. Given these conflicting findings, what can we infer about how the choices offered on Election Day affect the public’s willingness to participate in the exercise of collective choice?

To make headway on answering this question, and thereby test a key argument presented by responsible party theorists, I examine how the nature of the choice between competing candidates affects voter turnout. Using data collected by Project Vote Smart, I generate estimates of the spatial locations of candidates in dozens of U.S. Senate races between 1996 and 2006, and 50 U.S. House races in 2006. Similar to how estimates such as DW-NOMINATE characterize the roll call voting behavior of members of Congress, these estimates I generate from the Vote Smart surveys characterize the ideological locations of the candidates running for office. Importantly, the Vote Smart data contain information on the campaign platforms chosen by both winning and losing candidates. I then characterize the level of ideological divergence between the candidates in a given race by taking the difference in the candidates’ estimates. For instance, if the Democratic candidate’s platform estimate is -1, and the Republican candidate’s platform estimate is +1, the level of candidate divergence is 2 units. As shown in Figure 1 below, the level of ideological divergence varies greatly; while some pairs of candidates choose platforms that are nearly convergent, other pairs of candidates run on campaign platforms that are highly dissimilar. 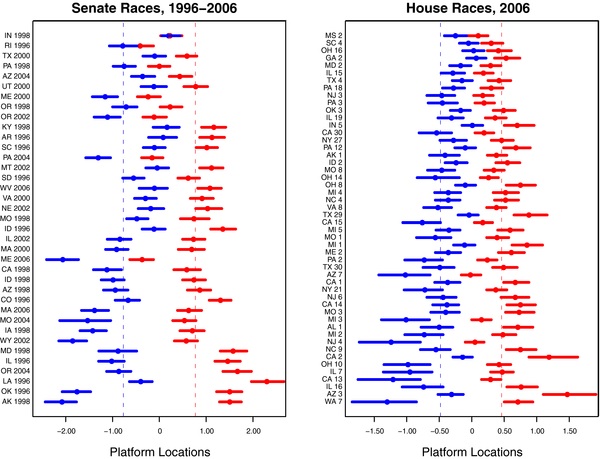 Note: The circles represent the point estimates for each candidate’s platform, and the horizontal lines are the 95% credible intervals from the posterior distribution. Republicans are shown in red, and Democrats are shown in blue. The dashed lines display the mean platform estimates.

I use two sets of individual-level data to examine how these levels of ideological divergence affect citizens’ turnout decisions. I merge the estimates of Senate divergence with data from the November Voting Supplements to the Current Population Study, conducted by the U.S. Census Bureau and the estimates of divergence in House elections with the 2006 Cooperative Congressional Election Study.

My main finding is that, rather than stimulate political participation, increasing policy differences between candidates significantly reduces voter turnout. Across both the Senate and House races, I estimate that citizens in districts in which the candidates adopted clearly distinct sets of policy positions were about five percentage points less likely to vote than citizens in districts where the candidates’ policy differences were not as substantial. These results hold up even while accounting for a wide range of demographic, political, and contextual factors and using a variety of alternative model specifications and statistical techniques.

Second, I argue that ideological divergence is likely to have heterogeneous effects across individuals, as not all citizens respond equally to ideological stimuli. Some citizens have greater tolerance for political conflict than others. In particular, citizens with higher levels of political sophistication may be better able to look beyond the fact of conflict, and thus understand what is at stake in the choice between candidates. Consistent with this explanation, I find that the relationship between ideological divergence and turnout is driven primarily by the demobilization of citizens with lower levels of education and political knowledge. Importantly, I do not find support for other alternative explanations, including the withdrawal of ideological moderates, abstention due to ideological alienation, decreased participation among Independents, decreases in political interest, or variation in the effectiveness of mobilization.

These findings give rise to something of a paradox: though clearly defined differences on policy grounds may increase the relevance of programmatic differences for electoral decision-making and increase the stakes associated with election outcomes, as previous scholars argue, increased ideological conflict reduces participation in the exercise of collective choice. Moreover, the findings imply that ideological conflict in elections does not intensify divisions between voters and nonvoters on the basis of ideology or partisanship. Instead, political sophistication appears to be the relevant characteristic that distinguishes voters from nonvoters. Not all citizens develop or apply ideological principles in the same way, and when the relevance of ideology increases for electoral decision-making, citizens who appear less likely to use ideological considerations to guide their ballot choices instead are more likely to stay at home. And finally, my research demonstrates that the effects of ideological conflict and, perhaps, party polarization more generally are likely to have more widespread effects than previous scholarship (e.g., Layman and Carsey 2002; Carmines, Ensley, and Wagner 2012) anticipated.

This article is based on the paper, “Electoral Choice, Ideological Conflict, and Political Participation” which was published in the American Journal of Political Science in October 2013.

December 4th, 2013|Democracy and culture, Elections and party politics across the US, Jon Rogowski|0 Comments
Previous post Next post