Candidates talk about issues to win elections, not to educate voters about them and their beliefs.

Why do candidates talk about the issues that they do? While many maintain that candidates running for office discuss specific issues in order to educate voters about their beliefs, John Barry Ryan argues instead that candidates may be clear, ambiguous, or even silent on issues depending on their district’s ideological similarity to their own views. Through an analysis of attitudes towards the Iraq war via statements on Congressional campaign websites, he argues that candidates who believe they are on the same side of the issue as their district are more likely to make clear statements, while those who are not are much more likely to remain silent.

Politicians strategically decide how and when to talk about issues.  So, a candidate may say nothing about one issue, speak in very vague terms about another issue, and make a clear policy statement on yet another issue.  How the candidate addresses an issue hinges on the interplay of three variables: whether a candidate has nothing to hide (i.e., the candidate’s issue positions are similar to the district’s), nowhere to run (i.e., the issue is important to the public and seemingly cannot be avoided), or nothing to lose (i.e., the candidate has little chance of winning and is willing to take risks). 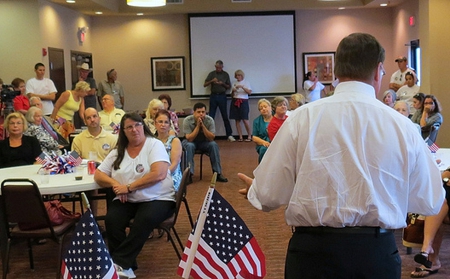 It may seem that a candidate who has similar positions to the voters in a district would feel free to speak clearly on all issues.  There is no benefit, however, to speaking clearly concerning issues about which voters do not actually care.  Further, if an issue is not salient with the public, it is unclear how voters will respond to the issue once the candidate makes it salient by speaking about the issue.  Hence, as the congruence between a candidate’s position and the voters’ ideology increases, candidates are more likely to speak clearly about issues, but only if the issue is salient in the district.

Candidate quality (by which we mean the candidate’s experience as a legislator) also conditions how ideological congruence affects the way candidates address issues.    The incumbent has the advantage that comes with being a member of Congress—remember, Americans hate Congress, but usually like their representative in Congress.  As such, the incumbent does not need to address the issues.  He or she simply can win an election running on name recognition and service to the district.

A low quality candidate, someone who has never won an election, cannot focus a campaign on the experience they do not possess.  Some will speak ambiguously about the issues hoping that they can use vague rhetoric to hoodwink people. Others will speak clearly, boldly hoping either that events will shift public opinion in their favor or that their pronouncements will attract the attention of donors outside the district.

Then there are quality non-incumbents like state legislators.  When there is an ideological mismatch between candidate and the district, a quality non-incumbent would fare better by ignoring issues and emphasizing his or her previous experience and constituent service. But when ideological congruence is high, these candidates should perceive less risk associated with revealing their true issue positions.

We can see this when we look at the campaign websites of candidates for the House of Representatives.  Candidate websites are perfect for examining strategic decisions because of their virtual ubiquity even among poorly funded campaigns.  Further, the websites reflect the campaign’s unilateral decisions to make statements regarding issues and not statements prompted by a reporter’s question.

Figure 1 below represents the probability that a House candidate’s website contained a clear statement, an ambiguous statement, or remained silent on the Iraq War during the 2006 and 2008 Congressional campaigns (go here for details on the statistical model that produced these probabilities).  Remember in 2006, the Iraq War was the highly salient issue; by 2008, fewer US combat deaths and a crumbling economy pushed the Iraq War off the front page.

Figure 1 – Salience of issues and ideological congruence in district 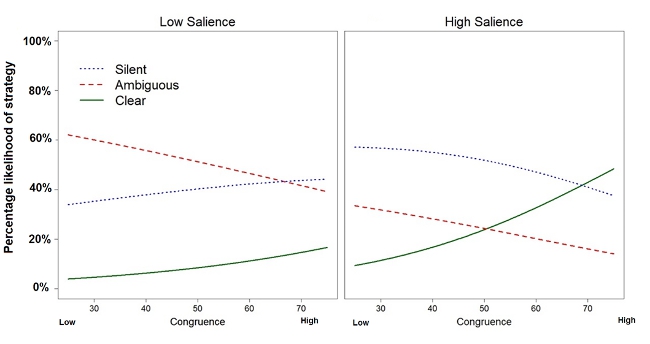 The x-axes in the graphs represent the level of ideological congruence in a district.  Compare the solid green lines in these graphs which represent how likely it was that a candidate took a clear position with the red dotted lines which represent the probability the candidate said something ambiguous about war policy (for example, “I support the troops”).  When the war was lower in salience (the left side of the figure), candidates always were more likely to say something ambiguous than clear because there was no reason to make a clear statement and risk having events outpace your statement.

Figure 2 looks at how candidate quality affects the likelihood of a candidate making a clear issue statement.  First, look at low quality candidates, the far left graph.  Ideological congruence does not affect these candidates’ strategies too much.  They are more likely to say something than nothing concerning the Iraq War, though, when they say something it is often something vague.  Now, look at incumbents, the far right graph.  Ideological congruence plays a heavy role in the clarity of what they say if they choose to make a statement, but overall incumbents are more likely to say nothing regarding the War.

Finally, look at the middle graph.  These are “quality” candidates who have won an election before, but are not House incumbents.  Their strategy is determined almost entirely by ideological congruence.  Below 50 percent congruence, they try and say nothing of substance on issues.  When more than half the district agrees with them ideologically, then they are the most likely to take a clear stand on Iraq War. 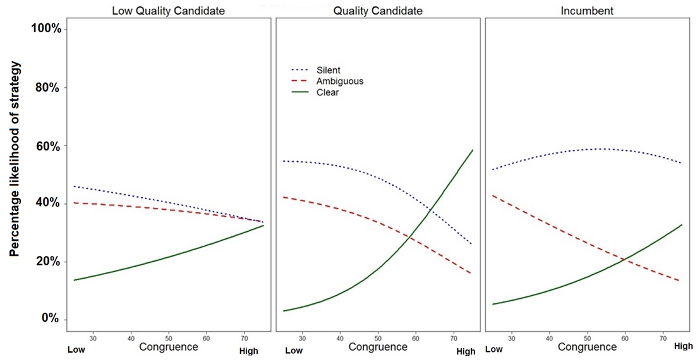 There are two ways to look at this: one positive and one negative.  Candidates who have held public office spend less time talking about the issues, but they have a record to judge on which to judge them.  Further, candidates with less experience (and who are not as well known) will spend more time talking about their positions on the issues.  Alternatively, candidates only speak out on highly salient issues for which they know voters will agree with their stances and thus most issues are avoided.  Either way, remember, when candidates are clear, ambiguous or silent about their issue positions, they are doing it to win an election not to educate you about them and their beliefs.

This article is based on the paper, “Nothing to Hide, Nowhere to Run, or Nothing to Lose: Candidate Position-Taking in Congressional Elections”, which is forthcoming at Political Behavior and currently available on the journal’s website.