Obamacare on the up, NSA may have broken the Fourth, and how is divided government killing John Boehner? – US national blog round up for 14 – 20 December

With last week’s agreement on the budget in Congress, commentary turned back again to the rollout of Affordable Care (Obamacare). On Monday, Hit & Run writes that up to 15,000 who applied for health coverage using the Federal Exchange have not been covered, due to a technical glitch. White House Dossier offers some (tongue in cheek) hidden benefits of Obamacare, including: “4. No more concern about seeing a good doctor as all the good doctors retire and smart people opt not to go into medicine.” On Thursday, Hit & Run reports that even the state of Massachusetts (which already had a functioning healthcare insurance exchange), is struggling to properly set up its Obamacare exchange. Wonkblog reported this week that Retired Microsoft executive, Kurt DelBene would be taking over the reins at Healthcare.gov, replacing former Obama official, Jeff Zients.

Commentary on Obamacare was not all doom and gloom this week, however. PoliticusUSA says that the program has already benefited nearly 80 million families to the tune of $3.4 billion in savings on their premiums, while National Journal looks at some of Obamacare’s unlikely beneficiaries. On Tuesday, Daily Kos writes that Obamacare’s polling numbers have rebounded to what they were prior to the program’s rollout, with 46 percent of Americans supporting it. Writing at the New York Times, Paul Krugman says that with improvements in Obamacare’s IT, and enrollments on the rise, Republican predictions of a ‘death spiral’ for the program should now be laid to rest. Meanwhile, Wonkblog says that, now that the Healthcare.gov website is working much better, health insurers will spend over $500 million on television ads in 2014 to get people to sign up to their plans. Finally, The Monkey Cage unpacks five myths about the future of Obamacare, including the idea that ‘Government programs never die’. 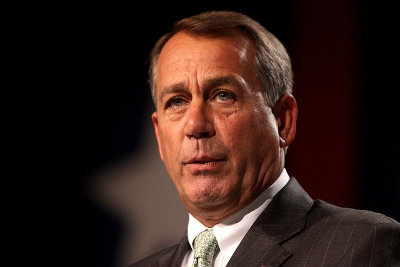 Last week House Speaker, Republican John A. Boehner, expressed his public displeasure with outside conservative lobby groups’ work against the passage of the budget. American Thinker says that business lobbyists have applauded Boehner’s ‘rant’, but also that someone should ‘muzzle’ Boehner to ensure that the ‘name calling and bad blood’ does not get out of hand. Later in the week The Monkey Cage looks at how divided government is ‘killing’ Boehner, citing research that has found that when one party controls the White House and a different party controls the House, the speaker’s approval rating falls among members of the public in the speaker’s party.

On Wednesday, the Senate passed the budget bill 64 votes to 36. The Atlantic takes a look at what remains unresolved despite the budget’s passage – the largest spending questions, including entitlements, tax loopholes and the debt ceiling. While many have hailed the budget deal as a compromise between the Republican and Democratic parties, Wonkblog says that it actually shows the opposite, given the number of issues left unresolved.  Perhaps as a sign of this lack of compromise, Crooks & Liars reports on Sunday that Representative Paul Ryan (R-WI) has promised that Republicans will not agree to raise the debt limit in 2014 without some of their demands first being met.

On Monday, The Atlantic examines the idea that Congress does not work hard, saying that while the body was only in session for 126 days in 2013, many Members work 12-hour days, and 60-hour weeks when in their districts. Daily Kos takes the opposing view, writing that Members seem to work a 9-12:45 job, given the number of hours the House was in session this year. Whether Congress works hard or not, just 8 percent of Americans trust Members (below even car salespeople!), reports Outside the Beltway.

This week also saw the announcement by two Republican and one Democratic Representative that they would not seek re-election in the 2014 midterms. According to PoliticusUSA, while the Democratic seat in Utah is likely to turn Republican, the two Republican seats may well be winnable for the Democrats in 2014. Turning to President Obama, The Lonely Conservative writes that the Washington Post has declared 2013 to be his worst week in Washington. On Thursday, Sabato’s Crystal Ball has 14 political predictions for 2014. The only one that we can be certain of is that “elections for at least 35 Senate seats, 435 House seats, and 36 governorships will occur in the new year”.

On Saturday, The Feed reports that a US and Chinese warship were involved in a near collision in international waters in the South China Sea. They say that the incident is a further indication that tensions in East Asia are not going away.

On Monday, The Atlanticlooks at new evidence that the head of the National Security Agency (NSA), currently under scrutiny for its previously unknown spying and surveillance programs, misled the Obama administration as to the extent that the organisation was able to monitor the actions of its employees. This is especially important given Edward Snowden’s recent leaks of classified information; his actions leading up to the leaks seemed to have gone unmonitored. Also on Monday, a District Court Judge ruled that the NSA’s collection of “metadata” as revealed by Snowden was likely to have violated the Fourth Amendment. The American Prospect has four important takeaways from the ruling; that the NSA cannot escape scrutiny based in the loophole of secrecy; that the NSA’s program is a ‘search’ under the Fourth Amendment; that the program violates a reasonable expectation of privacy; and that warrantless searches are not justified by security needs. Hit & Runlooks at a recent confrontation between President Obama and Germany’s Chancellor Angela Merkel over the NSA’s surveillance activities. Merkel is said to have told Obama that the NSA’s surveillance of her mobile phone was akin to the activities of the Stasi (East Germany’s secret police during the cold war).

The Foundry looks at the National Defense Authorization Act for 2014. They say that while it has some positive aspects, such as protecting the U.S. missile defense program, it also fails to address some security concerns in Asia, and does not do anything about the Navy’s ‘wasteful’ practice of spending resources on biofuels. Still on the U.S. military, Daily Kos looks at plans to move away from military pensions, and replace them with 401(k) style plans, as well as tying pensions to rank and billet levels as well. Finally, The Hill’s Congress Blog says that the recently agreed budget would increase the Pentagon’s spending by $22 billion for 2014, which will do nothing to reduce the already vast amount of wasteful spending on some defense programs.

Last week was the one year anniversary of the tragic shooting at the Sandy Hook Elementary School in Newtown, Connecticut. Wonkblog says that more than a year later, while there has been next to no movement on gun control in America since; the one thing that has been done is that the State Department has slowed down its efforts to reform and streamline the way that guns that are exported abroad are checked. Late last week saw another school shooting, this time at Arapaho High School in Colorado. American Thinker says that the incident shows the flaws in the arguments of those that would like tighter controls on guns, as a deputy sheriff – who had a gun – was able to end it.

Informed Comment looks at whether or not the drought that has been affecting most of the Western U.S. states for the past 13 years is a ‘megadrought’, that may continue for many years more.

On Monday Daily Kos looks at newly released statistics from the Department of Labor that productivity growth has risen to a four-year high, at the same time as unit labor costs have fallen. They say that this translates into continuing wage stagnation, and that the bottom 10 percent of the working population has seen a nearly 6 percent fall in real wages since 1979. With these sorts of statistics, it is unsurprising that a recent poll shows that 71 percent of Americans support a rise in the minimum wage, according to the National Journal.

The Atlantic looks at the ‘insane’ amount of gas Americans burn relative to the rest of the world – as much as three Germans or 6 to 7 French people.

Finally, Daily Kos profiles unemployment among American Indians, writing that for 25-54 year olds, the rate of employment was 13.4 percent below the white rate, and that 26.4 percent were living in poverty in 2011, compared with 11 percent for non-Hispanic whites.

The Foundry commemorates the 222nd anniversary of the ratification of the Bill of Rights by taking a look at how it came into being.

The Monkey Cage finds that having daughters makes you more conservative…or was that liberal?

Roll Call’s Heard on the Hill looks what Senators have been getting as part of their ‘Secret Santa’ gift exchange. Gifts range from wine, books, and chocolates, to model motorcycles and pieces of coal.