As democracy encounters increasing difficulties, many citizens are turning to the domain of alternative politics, and in so doing, making considerable use of the Web and other new communication technologies. We’re seeing new modes of political participation and even political cultures are emerging, but it would be foolish to expect some simple ‘techno-fix’ for democracy argues Peter Dahlgren. This is a great and important book about changing media, writes Nick Anstead, and Dahlgren avoids offering us another one-sided new media polemic.

Discussion of the internet and political activism, especially in popular discourse, has frequently been based on very broad generalisations. Media coverage of a number of events and movements – for example the anti-globalisation and Occupy protests, the 2009 post-election uprising in Iran, and the Arab Spring – have focused heavily on the role played by social media as an enabler, lauding its contribution to radical protest. In contrast, commentators such as Malcolm Gladwell have dismissed online participation as a form of ersatz activism which is little more than a distraction from the real business of non-virtual politics.

In a debate characterised by such polarised positions, Peter Dahlgren’s latest book is a welcome and important intervention. Drawing on a range of contemporary examples, Dahlgren argues for a far more nuanced reading of the relationship between the evolving media environment and political participation, arguing that we should reject one size fits all readings of new media. Thus the context of any given event remains hugely significant for how we understand it, and we always need to consider the role of both traditional media and non-mediated political activity. Only in this way can we really start to understand the significance of new media.

This approach is well demonstrated by the reading of the Occupy Wall Street protests offered in one of the core case study chapters of the book. This event merged traditional modes of street politics, where space in the real world was co-opted by a movement with a radically different conception of democracy to that found in institutionalised political life, a point most evident in the “This is what democracy looks like” slogan employed by the protests. At the same time, the discourse of the 99 per cent was publicised through social media, which in turn allowed it to cross over into more traditional media and political spaces, with even President Obama acknowledging the protests reflected the frustrations of many Americans.

Dahlgren is somewhat ambivalent on how we should read this process, though. The Occupy Wall Street protests coincided with increased discussion of inequality and poverty in news media. Yet the very success of the 99 per cent meme, by focusing on one particular definition of inequality, may have undermined more sophisticated discussions of the role class plays in American life and politics. Certainly, Occupy Wall Street struggled with the perception that it was dominated by a relatively upper middle class, white and male cohort, which may have limited its ability to develop into a more powerful and long-standing counterpoint to orthodox views in American politics.

Dahlgren’s analysis of Occupy Wall Street raises a second question about activist modes of participation: exactly how does it relate to institutionalised politics? In the case of Occupy Wall Street, this was particularly ambiguous. Were activists offering a genuinely radical alternative to the status quo, or are they better seen as a radical offshoot of mainstream politics, a sort of Democratic-leaning Tea Party movement? Certainly, strands of both perspectives could be found in the discourses generated by the protests, which highlights the ambiguous and multifaceted relationship between institutionalised and activist politics.

However, Dahlgren’s focus on context and rejection of techno-centrism should not be taken as outright scepticism that new media is changing social practices. This is perhaps best illustrated in the chapter focusing on the role of public intellectuals in contemporary society, where the author argues that the opportunities offered by new media are driving a dramatic transformation. Indeed, academia is at the forefront of this development (as the many blogs and social media accounts hosted by the LSE neatly demonstrates), with those at the cutting edge of research having a far more powerful megaphone for reaching political and media elites, and the public than was previously the case. But this change also raises question. In an age of easy self-publishing, exactly who can be defined as a public intellectual?

The concern here, echoing (although in a far more normatively moderate tone) Andrew Keen’s argument voiced in the Cult of the Amateur, is that a new generation of web intellectuals will have a profound influence on the tone and quality of publically available information. Dahlgren’s central unease relates to a decline in the quality of rationality. Is he right to be worried? The evidence is mixed. We certainly can point to examples where web intellectuals have considerably increased the quality of debate surrounding specific issues. Nate Silver’s work on opinion polling springs to mind, as does Ben Goldacre’s blogging on the weaknesses of science reporting and pharmaceutical research. But contemporary media spaces seem also to incubate particularly virulent strands of anti-rationalist discourse, a point neatly highlighted by former George W. Bush speechwriter David Frum, when he argued that contemporary American conservative-supporting media “immerse their audience in a total environment of pseudo-facts and pretend information.” Indeed, Dahlgren cites modern American conservatism as a prime example of a developing anti-rationalism that has the potential to undermine the quality of political debate (although we should perhaps note Frum’s concern – that the anti-rationalism of the conservative movement essentially makes it unelectable – as a cause for more optimism than Dahlgren allows for).

This is a great and important book about changing media, but there is also an important additional spectre at the feast: the financial crisis, creating an uneasy sense that politics, as well as the way we communicate about it, is changing in highly unpredictable ways. Both the Occupy Movement and anti-rationalist conservatism speak to a sense of broad dissatisfaction with contemporary politics, even if they have thus far failed to connect with mainstream. Thus perhaps Dahlgren’s greatest service is to avoid offering us another one-sided new media polemic, but instead open our minds to the many co-existing possibilities – both good and bad – that the future may hold. 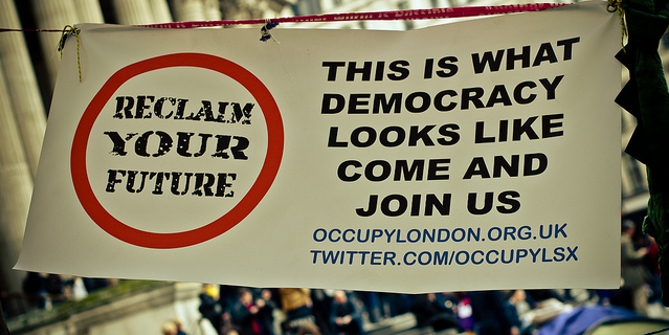