Politicians’ ability to survive a scandal is more to do with their ability to govern and maintain coalition than with the public’s approval.

Last week we saw New Jersey Governor Chris Christie embroiled in what has become known as the ‘Bridgegate’ scandal. But what are the factors that make a scandal last longer or shorten them? Brandon Rottinghaus has made an in-depth study of national and state-level scandals, finding that at state level they generally last for less than 100 days, and around six months for presidential-level scandals. He finds that elected officials are far more likely to survive scandals as opposed to appointees, because, having been elected; they are simply harder to remove, and that a greater degree of legislative opposition makes scandals harder to overcome.

The recent and ongoing scandals involving Toronto Mayor Rob Ford (allegations of drug use), New Jersey Governor Chris Christie (aides closing part of a bridge), Virginia Governor Bob McDonnell and his family (possibly illegal acceptance of gifts) and President Barack Obama (Benghazi or the IRS scandal) has the media querying how politicians survive these seemingly career-ending episodes.  Of course, these events are only a few on a long list of past and current scandals affecting politicians at all levels. 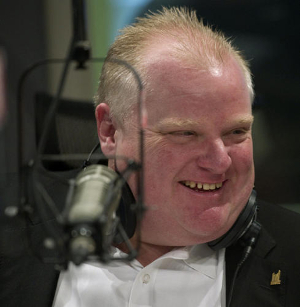 It is clear that scandals are a common part of political life for most chief executives, but which factors shorten or lengthen the duration of a scandal?  The emergence of scandals presents strategic choices for elected officials and staff to resign or not and political choices for legislators to sanction or impeach an elected executive.  These strategic decisions relate to the political environment, most prominently political strength.  For instance, one factor often referenced in the survival of a scandal is the amount of political support for a politician in the legislature, where greater numbers of willing defenders within the politician’s political party provide for pillars of support.  The state of the economy is also often pointed to as a factor in surviving scandal.  For instance, President Clinton was suggested to have survived the Monica Lewinsky scandal, and subsequent impeachment, because he presided over a robust economy.  Public approval may also play a role where greater political strength for an executive flows from higher poll numbers.  Of course, the “entertainment” value of a scandal, often directly related to salacious charges of infidelity or personal indiscretions, often factor into a quick end for politicians embroiled in scandal.

In recent research, I argue that various institutional and political factors affect the likelihood of political survival for politicians accused of wrongdoing.  Using data tracking U.S. executive scandals (governors and presidents) from 1972 to 2011, I chart the duration of each scandal and examine the factors that end an official’s career more quickly (through resignation or termination). 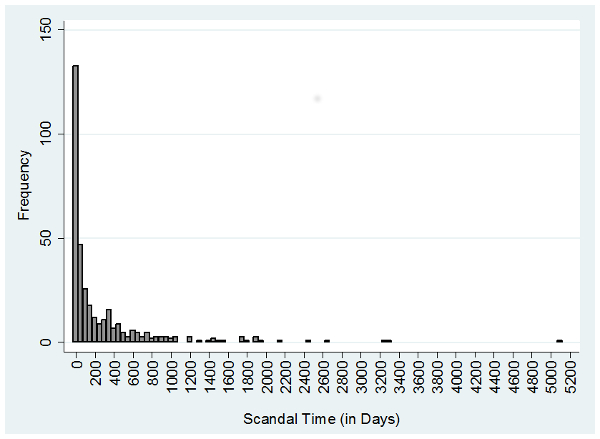 In general, scandals tend to be short lived events.  Figures 1 and 2 depict histogram for state and national executive scandals.  For state scandals, the average length of a scandal (excluding one outlier) is 255 days.  Most state level scandals last for less than 100 days, with only a few lasting longer.  For instance, Governor James McGreevey of New Jersey admitted that he was a homosexual and had an affair with another man in his administration the same day he announced he planned to step down as governor.  Scandals do not always end badly for governors, even if they are short.  In another example, Governor Bill Sheffield of Alaska, who was accused of misusing his office and lying under oath, was spared from impeachment after just 11 days of hearings after the Senate decided that there was not enough credible evidence to impeach him. 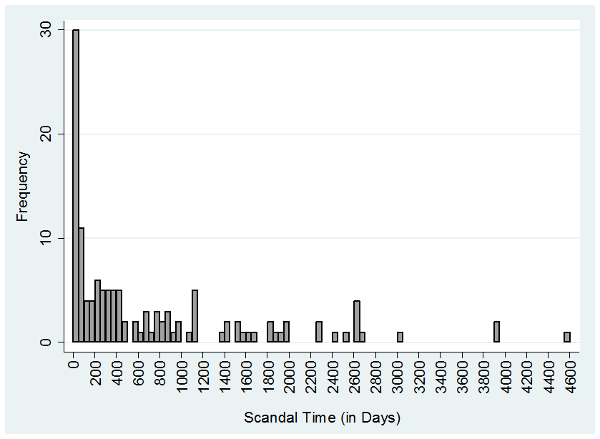 The data on presidential scandals, also demonstrate that most national chief executive scandals end quickly (although not as quickly as most state-level scandals).  In fact, nineteen scandals required less than one month from start to finish.  Like gubernatorial scandals, most of the cases are over within 100 days.  Only about 30 of the national level scandals last less than 100 days.  Often, these fast-concluding scandals involve nominees, such as Bernard Kerik (Secretary of Homeland Security nominee), Douglas Ginsburg (Supreme Court nominee) and three “Nannygate” nominees (Kimba Wood, Zoe Baird, and Linda Chavez). Among office holders, Eli Segal, the first CEO of Americorps, resigned abruptly when it was alleged that he had conducted improper business relationships.  Peter Bourne, President Carter’s “drug czar,” resigned when he was caught writing a prescription for a fictitious individual (under the guise of giving the prescription to a White House colleague).  Ultimately, the median scandal lasts six months.  The average scandal is longer than state level scandals at 636 days.

So, which factors predict a quicker end to scandals?  First, the findings reveal that elected officials themselves (as opposed to appointees, nominees or staff) are more likely to survive a scandal.  Considering complicated mechanisms for removal from power, and considering a general reluctance to take these extreme actions anyway, this leads to inertia for high ranking elected officials surviving their scandals.  These politicians are also less likely to resign, believing the voters mandated their time in office.  This explains, in part, why Toronto Mayor Rob Ford has survived in office during his recent erratic behavior.

Second, public approval of a politician has no effect on protecting executives from the damage of scandal.  We might expect worsening public approval to have a deleterious effect on political survival.  Although Virginia Governor Bob McDonnell’s approval ratings were quite low at the time he left office, approval appears to have no effect.  Many such politicians discount current opinion and cling to the original public electoral voice that elected them.

Third, although personal scandals (as opposed to financial scandals) sink careers of those associated with national executives, there is less of a consistent effect at the state level.

However, my strongest institutional findings also suggest that the presence of more legislative opposition leads to less chance of surviving scandal.  The prospect of further legislative losses in the New Jersey legislature likely prompted the termination of Governor Christie’s Deputy Chief of Staff in “Bridgegate,” where several of the Governor’s aides engaged in closing a bridge during peak travel times ostensibly for political retribution.

The survival of scandal has serious implications for governance at the state and national level.  Ultimately, the ability to survive scandal, then, is connected to the executive’s ability to govern and maintain a viable political coalition rather than the amount of adulation received by the public, affirming the partisan institutional importance of governing in crisis.

This article is based on the paper, “Surviving Scandal: The Institutional and Political Dynamics of National and State Executive Scandals” in the January 2014 issue of PS: Political Science and Politics.

Brandon Rottinghaus – University of Houston
Brandon Rottinghaus is the Senator Don Henderson Scholar at the Department of Political Science, at the University of Houston.  He holds a Ph.D. in political science from Northwestern University.  His primary research and teaching interests include the presidency, the American governor, the media, public opinion, executive-legislative relations and research methods.  His work on these subjects has appeared in several journals, edited volumes and law review articles and in his book, The Provisional Pulpit:  Modern Conditional Presidential Leadership of Public Opinion (Texas A&M University Press).  He is also the founding designer of the Presidential Proclamations Project at the University of Houston, an online resource documenting presidential use of unilateral powers through executive proclamation.

January 13th, 2014|Brandon Rottinghaus, Democracy and culture, Elections and party politics across the US|0 Comments
Previous post Next post