Although the public’s interest in ‘Bridgegate’ seems to be waning, Chris Christie is still under intense scrutiny. Daily Kos reports on calls to investigate yet another possible Christie scandal, this time for a 2010 incident where the governor’s administration allegedly blocked a local prosecutor from pursuing a case against a county sheriff and eventually fired the prosecutor for it. American Thinker writes that Hoboken was not short-changed on Hurricane Sandy relief funds, in spite of claims by Mayor Dawn Zimmer that the city was denied aid because she refused to comply with Christie’s demands to back a development project. The numbers show that Hoboken received standard funding compared to other cities after the storm. On Thursday, Blue Jersey reports that former New York Mayor, Rudy Giuliani has said that it’s ‘fifty-fifty’ as to whether or not Christie knew about the bridge closures. Finally, Occasional Planet looks at an article from the New Yorker on this history of the New York Port Authority and how Christie “ruined” the agency even before Bridgegate by filling it with his supporters.

In New York, Congressman Michael Grimm made headlines this week for threatening to throw a reporter off a balcony after the State of the Union address for asking him a question about an ongoing campaign-finance investigation. Daily Kos reports that this should not have been surprising because the Congressman has “been a raging asshole for years on end.” In addition to several campaign finance scandals, he has reportedly pulled a gun on someone over an altercation in a club and threatened to make a police officer disappear. State of Politics writes that Governor Andrew Cuomo and New York City Mayor Bill de Blasio held a press conference this week that highlighted their “bromance,” in spite of recent clashes over the funding of a universal pre-K program in New York City. The Lonely Conservative bemoans the tax rate in New York, which is the highest in the nation. Still in New York, Hit & Run writes on Thursday that de Blasio has announced that the city has dropped the appeal against a challenge to the NYPD’s policy of stop-and-frisk.

Green Mountain Daily warns Vermont gun-owners of a new bill that would prevent hunting on any land that is owned, leased, controlled, or subcontracted by a school, which would deny hunters access to thousands of acres of land.

In New Hampshire, Granite Grok rejects Attorney General Eric Holder’s argument that voter ID laws are unnecessary and discriminatory, calling them a necessary step to prevent someone from stealing your vote.

PoliticsPA writes that Pennsylvania Governor Tom Corbett has asked a higher court to review a previous ruling that the state’s voter ID law was unconstitutional; the administration disagrees with the court’s decision.

Voter ID laws also made headlines in North Carolina this week. The Progressive Pulse writes that GOP lawmakers may soon be required to reveal their thought process in creating North Carolina’s restrictive voting law (House Bill 589) as they have been subpoenaed for their emails, letters, reports and other records in the lead up to the bill’s passage. Wonkblog examines the effects of North Carolina’s cuts to unemployment insurance in July, finding contrasting reports from the Bureau of Labor Statistics and a report from the University of Oslo. Meanwhile, BlueNC decries Blue Cross Blue Shield’s decision to cancel gay couples’ insurance policies in North Carolina, even if the couple was legally married in another state.

In Virginia, Daily Kos reports that after a tight recount of Accomack County, Democrat Lynwood Lewis has emerged victorious and secured the Democratic majority in the divided State Senate. Outside the Beltway looks at Robert Sarvis, who received 6.5 percent of the vote running as a libertarian candidate in Virginia’s gubernatorial election last year, writing that he has announced that he will challenge incumbent Senator Mark Warner in the upcoming election. They do not expect him to do well in the election.

In Florida, National Journal writes that embattled Representative Trey Radel’s announcement that he will resign his seat has set off an in-party race for his seat, which is considered safely Republican, with four potential candidates already expressing interest in running. SaintPetersBlog notes that by resigning, Radel has made history with the second-shortest term served in the U.S. House of Representatives. Outside the Beltway reports that former Governor Charlie Crist, who is vying for the Democratic nomination for Florida’s governor, is leading incumbent Governor Rick Scott in a Quinnipiac University poll.

Daily Kos looks at the incredibly close Kentucky senate race for Minority Leader Mitch McConnell’s seat, arguing that if McConnell votes against increasing the minimum wage, he will seriously risk losing his seat.

In Arkansas, Talk Business Arkansas writes that a massive 75 percent of voters agree with Lt. Governor Mark Darr’s decision to step down in the wake of the largest ethics fine in Arkansas history for a campaign finance scandal. Meanwhile, the Arkansas Times looks at some ‘fuzzy math’ and the race for the state’s governorship.

Louisiana Voice strongly criticizes Governor Bobby Jindal, primarily for his fiscal policy, which has primarily relied on one-time funding for consistent outlays, but also for the privatization of public hospitals, and for ordering the Louisiana National Guard not to process any benefits for gay veterans.

In Texas, Burnt Orange Report puzzles over Governor Rick Perry’s seemingly about face on marijuana policy, when he announced at the World Economic Forum this past week that he supports decriminalization.

On Sunday, The American Prospect looks at Chicago’s ‘tale of two cities’, and the economic politics of its Mayor, Rahm Emanuel, a far right Democrat who couldn’t be more different in his approach than freshly minted New York Mayor, Bill de Blasio. Still in Illinois, Progress Illinois writes that the state’s pension reform package, recently signed into law, will actually make $15 billion less in savings over the next 30 years.

In Missouri, Crooks & Liars writes that women are fighting back against a proposal from state lawmakers that the waiting period for an abortion be increased from 24 to 72 hours.

This week Texas Senator Ted Cruz stated in a television interview that President Obama should apologize for his mistaken claim that under Obamacare, people would be able to keep their plans. North Dakota’s SayAnything Blog says that the state could definitely use that apology, given that 35,000 North Dakotans lost insurance, and less than 5,000 gained it. Still in North Dakota, The Prairie Blog publicizes a map of all the oil and other hazardous material spills in the state’s oilfield since 2000, something that the state’s leaders may not wish you to see.

Indiana’s Hoosier Access writes on Sunday that it is time to ‘be real’ about the proposed marriage amendment to change the constitution to recognize gay marriage, given that benefits for domestic partner benefits would not be endangered by the amendment.

In Wisconsin, Blogging Blue reports that State Representative Melissa Sargent has proposed that marijuana be decriminalized in the state. They say that the proposal will be a non-starter for Republicans in the state legislature, but legalizing the drug could bring in tens of millions in tax revenue for the state. Finally, Blue Cheddar writes that Wisconsin experienced a ‘mysterious’ spike in union membership in 2013.

On Thursday, Montana’s Cowgirl Blog reports that the state is ranked third nationally in terms of Republican Tea Party members, per capita. She argues that this means that the ongoing ‘war’ between Montana’s Tea Party and establishment Republicans will continue to escalate.

Colorado’s The Spot looks at the pervasiveness of the urban legend that Republican lawmakers in the state sponsored a bill banning the use of food stamps in the state’s new marijuana shops.

PoliticusUSA reports on Friday that in Utah, dozens of grade school students at a school in Salt Lake City had their lunches confiscated and then discarded in front of other students, in order to shame the children into pressuring their parents to pay money owed to the school district for the lunch program.

The Blog for Arizona writes on Tuesday that a bipartisan group in the state legislature has introduced a resolution to support the adoption of the federal government’s 1972 equal rights amendment to the Constitution. Only three more states need to agree for the amendment to be ratified.

Crooks & Liars writes that Kshama Sawant, a recently elected socialist City Councillor in Seattle has pledged to give $77,000 of her $117,000 salary to a ‘Solidarity Fund’ to support her social justice causes. Meanwhile, Seattle PI writes that the long-blocked Washington Dream Act, which gives college aid for the children of undocumented immigrants, was headed for passage by the state Senate this week. They write that Democrats have been blocked from bringing the Act to the floor for three years.

Moving south to California, Fox & Hounds says that while the state’s economy is on the mend, its poor basic infrastructure is still a serious constraint on economic growth. They write that in a state that is ranked 47th out of 50 for its road quality, the focus should move from Governor Jerry Brown’s signature $68 billion high speed rail project to much more common sense projects. Capitol Alert writes that an attempt to raise funds to pay for such infrastructure improvements, an increase of the vehicle license fee, has been put on hold.   Flashreport argues on Wednesday that state Senator Roderick Wright should immediately resign from the State Senate. This call follows his conviction on eight counts of felony and voter fraud.

Last September saw a massive molasses spill in Honolulu harbor that killed thousands of fish and devastated coral reefs. Honolulu Civil Beat writes that the state’s lawmakers have now introduced bills that will improve emergency response to these sorts of incidents and tighten the oversight of state agencies involved in marine spills. Finally, Hit & Run reports that Hawaii State House Majority leader Rida Cabanilla has argued that the legalization of marijuana for production export (and its subsequent taxation), would be a great way to tackle the state’s $25 billion debt. 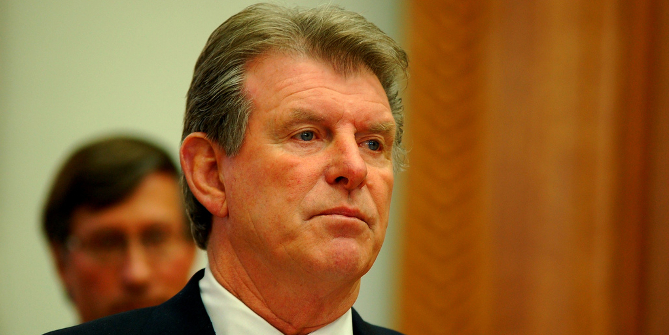