With more than 80 percent of Americans now living in urban areas, the consequences of city growth are more important than ever. But how does the growth of cites affect the way people commute? In order to investigate how this ‘commuting transition’ works, Selima Sultana and Joe Weber examined commuting times across 50 U.S. metropolitan areas. They find that, across time, commuting times are highest in new neighborhoods or in booming housing areas. As cities grow, these areas become more mature, and commuting times fall, with new areas again experiencing longer commutes.

In recent decades academics and non-academics have been deeply concerned about the fate of American cities and the challenges of managing growth and its consequences. In the late 1990s and early 2000s concern was about sprawl, or the low density automobile-dependent urban growth, associated with housing booms.  Later, the rising cost of gasoline led to questions over their sustainability, and in the aftermath of the 2008 recession the concern was on foreclosure, blighted neighborhoods, and the possibility that some of these suburban neighborhoods would become urban ghost towns.

But sprawling neighborhoods in peripheral areas of metropolitan areas that were created by housing booms a few decades ago have grown up and are now quite urban in appearances and functions. If we think of urban growth as a wave sweeping outwards, a common metaphor in the middle of the Twentieth century, we see that these varied urban concerns are all different aspects of the same growth phenomenon. During a housing boom, sprawl and its association with increases in commuting time will be a concern, followed by concerns over vacant housing and foreclosures during recessions. Then in future booms previously sprawling areas will become more urbanized. A few decades later these areas will have aged with more density, more economic and cultural functionality and hence more mixed-used activities, and more alternative transportation possibilities. 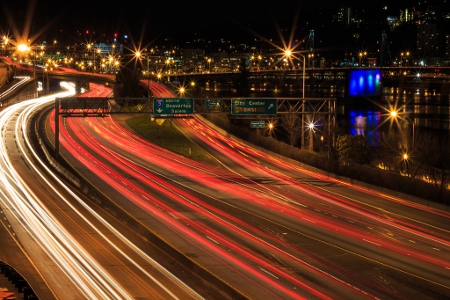 This continuing progress of urban growth has also shaped commuting times, in a process we call the commuting transition. To verify this we used U.S. census data for 1980, 1990, and 2000 to find average commuting time, the median age of housing, and other housing characteristics for over 207,000 census block groups. These are small areas, approximating neighborhoods, for which the Census Bureau provides a variety of statistics. From these block groups we examined the 50 largest metropolitan areas in detail and four cities in particular: Atlanta, Minneapolis, Phoenix, and Portland, Oregon, shown in the Figures below. 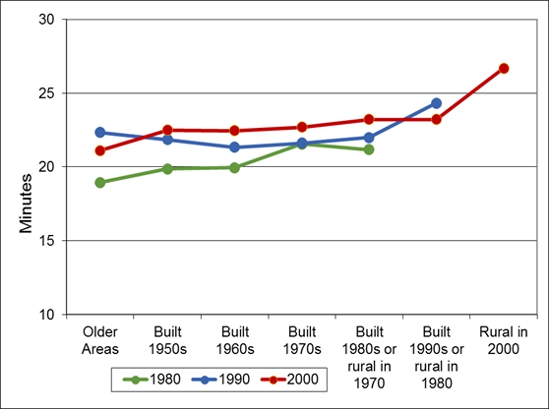 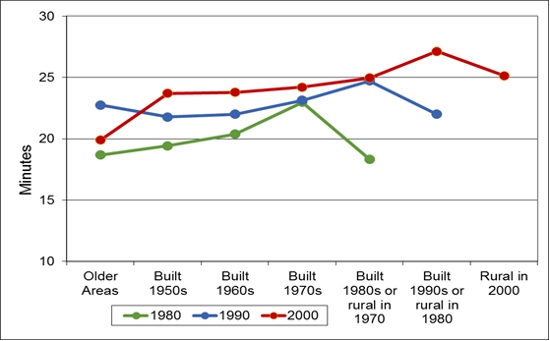 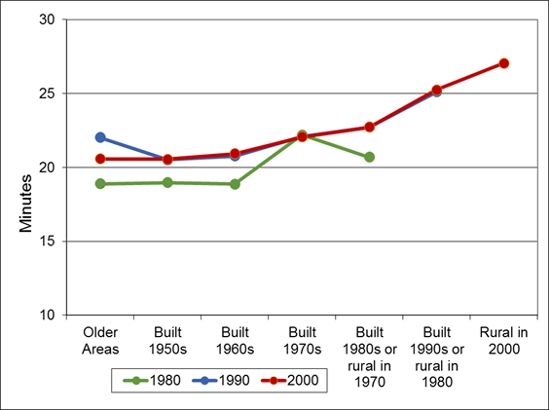 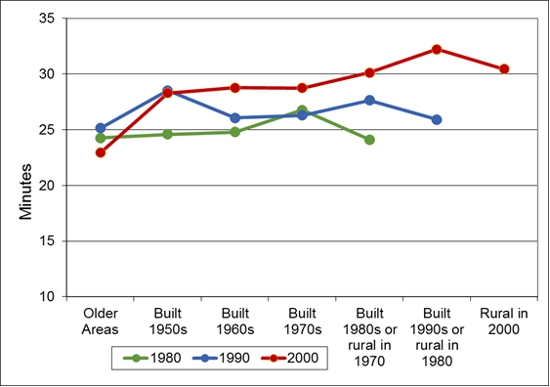 These figures show changing commuting times in every recent wave of urban growth that has received attention both for sprawl and for foreclosures in the recent recession. Each chart has three lines, corresponding to the 1980, 1990, and 2000 census. Each line gives the average commuting time in the oldest neighborhoods (those built before the 1950 census), those built during the 1950s, and those built in the 1960s and in the 1970s. For the 1980 census the 1970s represents newly built areas, while for the 1990 census areas developed in the 1980s are newly built. Likewise, for the 2000 census areas built in the 1990s are new (each of the three census years also shows commuting times for rural areas outside the city). For each of the three census years commuting times are highest in recently built areas or in recently booming housing areas. This is the commuting transition: commuting times increase as the city grows out into the countryside, and then fall as areas mature. Long commuting times are like a wave sweeping outwards from the urban core into rural areas.

Not all cities are as predictable as these in going through the commuting transition. Generally we found stronger evidence of the commuting transition in larger metropolitan areas, though we believe this is partly due to the data; the census numbers we relied on can only distinguish larger neighborhoods. Geographically the commuting transition tends to be strongest on the East and West coasts and weaker in Midwestern cities, which also have high commuting times in rural areas. Cities in the Southeast U.S. show the transition well, though again often with higher rural travel times. Growth boundaries make little or no difference. Portland, Oregon, shows a weaker commuting transition than Phoenix, but it is still shows the pattern. So does Houston, legendary for its lack of zoning.

It is not just commuting that change as neighborhoods age. Population density, public transit use, the percentage of workers commuting to central city jobs, and minority populations all increase. As a result, commuting time differences as well as other characteristics between newly built suburban areas and older areas disappear over time. The only variable that often doesn’t change in aging neighborhoods is the percentage of housing in the form of detached, single-family homes. This housing type is so fundamental in American cities, and has been for so long and protected by strong zoning laws that time makes no noticeable difference.

There are several dimensions of the commuting transition we have not been able to look at, for example, we could not break commuting times down by race and gender, but there is no reason to assume that they are evenly distributed throughout the population. The census did not ask about commuting times until 1980 so this is as far back as we can look to understand the commuting transition. While commuting has long been the focus of urban transport planning, non-work trips (those for shopping, school trips, visiting, doctor’s visits, etc) now make up the majority of urban travel. We do not have the data to examine this but expect that non-work travel shows the same patterns as commuting. Also, we are not suggesting that American urban growth patterns are problem free. Sprawl imposes measurably increased costs on local governments, many households spend enormous amounts of time and money in their commuting, and problems of housing affordability remain. But what our findings tell us is that cities are durable and dynamic, going through a decades-long transition.

While we haven’t discussed results from the 2010 census, as the detailed household data we used is no longer collected. Instead, the American Community Survey collects commuting data during an annual sample and it is difficult to compare this dataset with previous decades of census data. Nonetheless it is clear that the 2008 housing bust has stalled the commuting transition as housing sales reached their lowest point since 1963 in summer of 2010, while in 2008 residential mobility hit a lowest point since 1962. Conditions are slowly improving, but the future of urban housing remains uncertain.

This article is based on ‘The Nature of Urban Growth and the Commuting Transition: Endless Sprawl or a Growth Wave?‘, in Urban Studies.

Selima Sultana – University of North Carolina, Greensboro
Selima Sultana is an Associate Professor of geography at the University of North Carolina, Greensboro. Her research foci are in the area of Urban and Transportation Geography interested in the commuting patterns of individuals, households, and among different race/ethnic groups, focusing on how people negotiate the conflicting demands of household responsibilities and the changing urban settings of their lives. She has published numerous articles coauthored with Joe Weber on commuting and its association with urban growth patterns.