In recent years, central bankers in the West have become proponents of the theory that a glut of savings from the developing world led to huge capital inflows into the US in the early 2000s. But did a hunger for investment from the developing world really fuel America’s housing boom? Moritz Schularick and Paul Wachtel take a close look at the recent history of financial flows between sectors of the U.S economy, finding that the American financial sector provided funding for domestic mortgages, which was in turn funded by foreign private investors, not foreign governments.

Many central bankers in the West have embraced a reading of the financial crisis in which global imbalances and the surge in uphill net capital flows from poor to rich countries play a dominant role. This is hardly surprising. Such explanations conveniently attribute a good part of the blame for the economic and financial mess to events that took place outside of advanced economies. Former Chaird of the U.S. Federal Reserve Bank, Ben Bernanke’s savings glut hypothesis skillfully argues that a large and sudden rise of desired savings from developing countries – a savings glut – flooded the US economy. 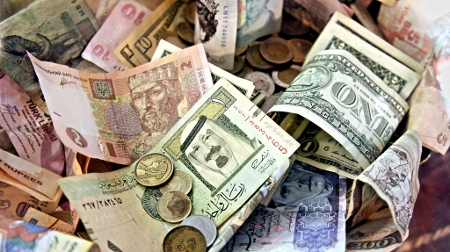 Others disagree with such an imbalance-centered view of the crisis. To name a few: Claudio Borio and Piti Disyatat (2011), Maury Obstfeld (2012) as well as Philipp Lane and Peter McQuade (2012) have all questioned the usefulness of current account based approaches to understanding the 2008 crisis and the drivers of financial fragility more generally. In a long-run empirical study, Jorda, Schularick and Taylor (2011) did not find a systematic link between current account imbalances and financial crises, but instead point to close link between credit growth and crises.

What exactly were the channels through which the reserve hunger of emerging markets fueled the housing boom in America? How did savings and investment patterns in the U.S. economy change with the influx of foreign savings?

We address these questions in new research where we study the evolution of sectoral financial balances in the US economy in the past 50 years using the Flow of Funds accounts. More specifically, we look at the changes in the gross financing flows between the different sectors of the US economy. Such a financial balances based approach meshes with recent contributions arguing that for a better understanding of global imbalances, we have to look beyond the study of net flows of capital (as measured in the current account and implicit in the savings glut hypothesis) and focus on the underlying gross flows of capital.

What do we find? We show that the relationships are more nuanced than implied in the savings glut view of the world. America’s imbalances were long in the making. New dynamics in the household and business sectors were already apparent in the 1990s, long before the deterioration in the US government balance or the current account balance and long before the arrival on the international stage of Chinese reserve accumulation, as shown in Figure 1.

Figure 1: U.S. Saving and investment as a percentage of GDP 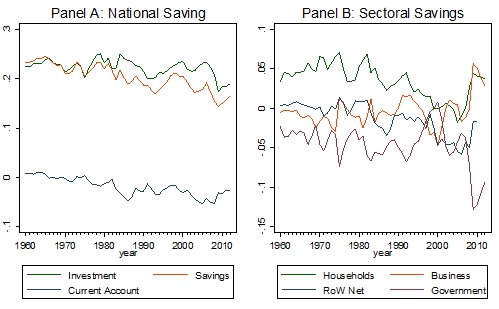 Note: Panel A shows gross domestic investment, national savings and the current account balance from the NIPA. Panel B shows the net financial investment of each sector.

The financial balance of the American household sector deteriorated in two phases. Phase 1: In the 1990s, American households dramatically reduced their acquisition of financial assets. Households reduced their active savings, but did not borrow in large amounts. The reduction in active savings was mostly a response to rising equity wealth during the stock market boom of the 1990s. Households’ acquisition of financial assets dropped from about to 10% of GDP in the 1980s to slightly above zero in the late 1990s. Phase 2: The second phase got underway after 1998 when – against the background of record low active savings – households started to borrow strongly after 1998. When record low active savings met the credit boom of the 2000s, the American current account went deep into the red. This is shown in Figure 2 below. The key shift in savings behavior occurred in the 1990s. The 2000s, by contrast, were marked by a shift in borrowing behavior.

Figure 2: Composition of Household Sectoral Balance as percentage of GDP 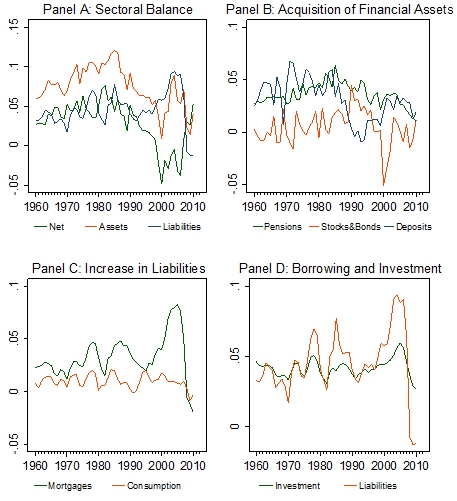 Who financed the mortgage boom of the 2000s? We show that China and other emerging markets played virtually no direct role in the financing flows behind the American credit bubble. In brief, the U.S. financial sector provided the financing for mortgage-hungry America (and collapsed when the party was over). But where did Wall Street find the savings to fuel to fire?

In the 2000s, the American financial system fed the credit hunger of the American economy mainly by issuing debt liabilities in international financial markets; but it was the foreign private sector, not foreign governments, that provided most of the fuel for the fire. Foreign official inflows went almost exclusively into Treasury securities while private investors bought bonds and other instruments issued by U.S. financial markets. In other words, those who are looking for international drivers of the American credit bubble should not look to Beijing and Riyadh, but to international private capital markets. The capital inflow bonanza of the 2000s that enabled the American credit bubble was primarily a private sector inflow, as shown in Figure 3, below. Beijing financed the war in Iraq at low cost; while Wall Street, foreign banks and private investors fueled the housing bubble.

Figure 3: Composition of Foreign Sector Balance as percentage of GDP 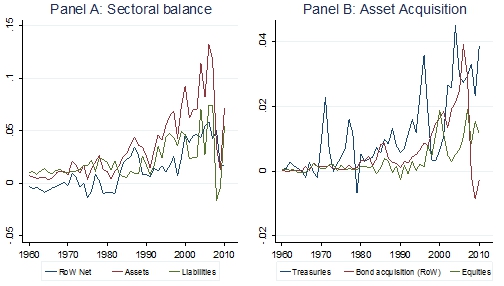 A version of this article also appeared at Econbrowser.

This article is based on the CESifo Economic Studies paper, ‘The Making of America’s Imbalances’.

Paul Wachtel – New York University
Paul Wachtel is a Professor of Economics and the Academic Director of the B.S. in Business and Political Economy Program, at New York University Stern School of Business. He teaches courses in monetary policy, banking and central banking, and global macroeconomics. His primary areas of research include monetary policy, central banking, and financial sector reform in economies in transition.