From the unequal application of stop-and-frisk to the slow snow removal from wealthy areas of New York City, Mayor Bill de Blasio has sparked a discussion about local government’s responsiveness to and treatment of different factions. Jessica Trounstine examines group levels of satisfaction with local government services. She and co-author Zoltan Hajnal find that racial minorities perceive the largest level of inequality, but when the government pursues policy to change this impression, whites become less satisfied with it.

One of the most regularly articulated concerns about American democracy is that the system represents the interests of more privileged groups at the expense of less advantaged segments of society. In our recent research, co-author Zoltan Hajnal and I find evidence of such inequalities in local politics. Relative to conservative and upper class respondents, liberal and poor residents are less likely to approve of municipal government and more likely to feel unsatisfied with municipal services. However, race remains the largest factor governing satisfaction in the local political arena. These racial disparities appear to be a function of local policies and municipal services. When local governments hire African Americans and increase efforts at redistribution, racial disparities in satisfaction diminish, implying that local democracy may be substantially less responsive to the preferences of certain groups. 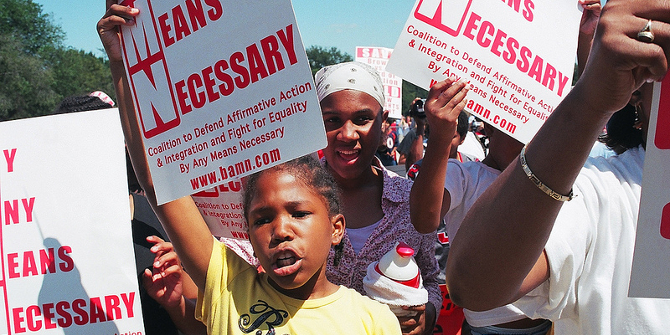 So, how do we know whether or not government is acting in a representative manner? Our approach is to analyze what the American public says about how they feel about the actions of government and how well those actions represent their interests using survey data.

In 1999 and 2002, the John S. and James L. Knight Foundation conducted surveys intended to document the quality of life in 26 communities. Between the focal communities and a national sample, the survey reached more than 35,000 people. The survey asked respondents to say how well their city government is serving their community. The survey also asked residents to assess the quality of specific local government services including police, fire, public schools, and public libraries.  Figure 1 reveals significant difference between demographic groups regarding their satisfaction with local government and services. 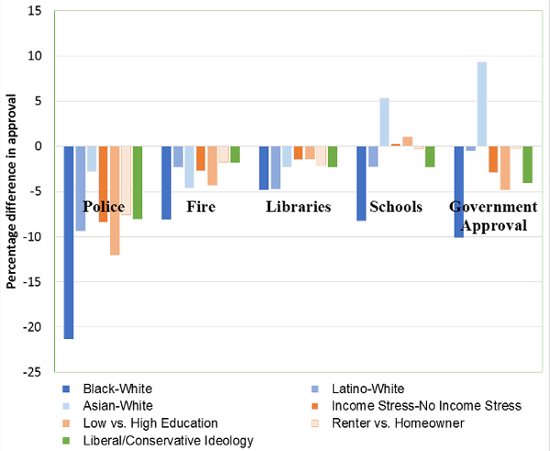 Clearly the largest divides in satisfaction are between racial groups. Compared to white respondents, blacks are significantly less likely to be satisfied with the performance of the police department, the fire department, local schools, and local libraries and significantly less likely to approve of their local government overall. In each case, the difference is substantial, ranging from about 5 to more than 21 percentage points. For instance, when asked how well the police served their community, 82% of white respondents said that they felt the police were doing a good or excellent job, compared to only 60% of blacks who felt that way. Latinos feel almost as underserved by local government services.

To analyze these gaps in satisfaction more rigorously and to control for the inter-relationships between race and income and the other measures of status we use regression analyses. Even after adding many different control variables we find that race matters in local democracy. Black, Latino, and Asian American respondents are significantly less likely than whites to be satisfied with city services. Black respondents also stand out in terms of government approval. Blacks feel substantially worse served by city government overall than whites. We find a similar result for low socio-economic status individuals and liberals.

More privileged members of society tend to rate local government and its services well, while those at or near the bottom feel underserved. And of all of the demographic inequalities, race is by far the most severe. Second, it is also clear that perceived differences in responsiveness by race cannot be explained by the lower socio-economic status of blacks and Latinos or by the left leaning nature of these groups. According to these respondents the performance of city government is uneven and decidedly favors white Americans. Bias may indeed be a problem for local democracy.

It is clear that racial groups perceive the actions of government differently, but what if these perceptions do not match reality? One way to address this concern is to see if perceived racial differences in responsiveness mirror differences in concrete, objective measures of local policy. In other words, are African American residents happier than whites with local government when the concrete policy choices of the local governments more closely reflect the preferences of the black community?

In this analysis, we focus on two regularly highlighted aspects of pro-black policy: affirmative action in hiring and spending on redistributive programs. We look to see whether a larger proportion of public employees that are African American and a greater share of the city budget spent on social services versus development affects the differences in satisfaction we identified above.

Are perceived racial differences in responsiveness real? Figure 2 suggests that they are. The figure shows the difference in average predicted government approval for black versus white respondents for each of our independent variables (e.g. the marginal effect of respondents’ race on government approval at different fixed values of each policy variable). Positive values indicate that blacks are more approving of the government than whites while negative values indicate the reverse.

Similarly, local government spending patterns seem to influence views. Localities that spend more on redistribution and less on development are viewed more highly by blacks and more negatively by whites. At the lowest levels of social service spending whites are more supportive of government than blacks. This relationship reverses as social spending increases; in cities that spend a large share of their budget on programs like welfare, health, and housing, blacks appear to be more supportive of city government than whites.

In sum, we find substantial evidence that poor, minority, and liberal residents feel less satisfied with their local governments than more privileged residents. They have lower levels of approval and more negative evaluations of basic city services. We find that when cities hire more diverse workforces and spend money on redistributive programs, the gap in government approval decreases. But even as one group becomes more satisfied with government outcomes, others become less so. In the end, we can offer no easy solutions. What we can offer is evidence that policy change may be able to ameliorate perceptions of unequal representation in American cities.

This article is based on the paper “Identifying and Understanding Perceived Inequities in Local Politics,” which appeared in Political Research Quarterly.

Jessica Trounstine- University of California, Merced
Jessica Trounstine is an Associate Professor in the School of Social Sciences, Humanities and Arts at the University of California, Merced. She studies American politics with a focus on sub-national politics, primarily concentrating on large cities. Her work studies the process and quality of representation. She is particularly interested in how political institutions enhance or limit the ability of residents to achieve responsive government.