People’s subjective expectations about their own future health can teach us a great deal about their attitudes towards smoking.

People’s subjective expectations about their own future health can teach us a great deal about their attitudes towards smoking.

Economic policymaking often depends on the ability to model how people evaluate the future consequences of the decisions that they make. Using data from a sample of nearly 13,000, Yang Wang investigates this by evaluating how people’s decisions to smoke are affected by expectations of their own longevity. She finds that subjectively, individuals attach less weight to their health conditions and smoking choices and more weight to factors like age, race, and their parents’ longevity. She also finds that adult smokers care more about their own health and tend to be more forward-looking than has been otherwise believed.

Expectations about future events are crucial to decision makers who consider the future consequences and implications of their current choices. For example, the potential for wage differentials affect young people’s schooling, career choices, and expectations about future Social Security benefits and timing of retirement. How to model these expectations is therefore a fundamental issue in economics, especially when considering individual choices with broader public implications, such as the decision to smoke.

In the existing economics literature, the standard procedures for discerning individuals’ preferences from observed choices are based upon suppositions about the formation of their subjective expectations (i.e. their opinions about what will happen in their future), the most common one among which is the rational expectations assumption. This states that economic actors use all the relevant information when anticipating future events and their predictions do not systematically differ from the realized outcomes. Put simply, although the future is not fully predictable, people do not make systematic mistakes when predicting it, and deviations from actual outcomes are only due to random errors. 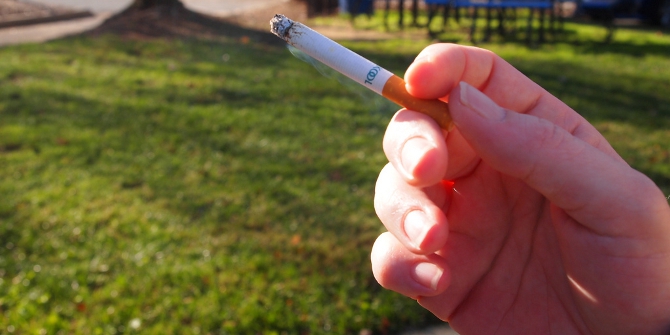 In reality, however, individuals’ subjective expectations about the future might be categorically different from those estimated by economists using a rational expectations framework. In such cases, assuming rational beliefs when individuals actually make their decisions based on their personal expectations will result in misleading conclusions about individual preferences, with important implications for economic analyses of decision-making processes and evaluations of public policies.

By directly incorporating subjective expectations, I relaxed the rational expectations assumption into a dynamic discrete choice model (where people are able to choose from a set of potential actions based on their expectations about the future), to explain how adult smokers – current and former smokers above age 50 – decide whether to quit smoking. The goal here is to infer individuals’ preferences using information from their own smoking decisions and subjective longevity expectations.

Smoking is linked to a myriad of quality-of-life reducing health problems such as lung cancer and chronic obstructive pulmonary disease. Tobacco use has been responsible for about one fifth of total mortality in the US since the 1990s; it is considered the number one cause of premature deaths and the most important preventable risk to human health. Although there are considerable external factors—such as financial concerns—when choosing to smoke, adult smokers’ decisions to quit smoking are determined mainly by longevity and health concerns. The availability of relevant data and the relatively few significant factors that go into the decision-making process make smoking an excellent testing ground for the impact of subjective expectations on individual choices.

We categorize the HRS respondents into current, former, and never smokers using their responses to the questions: “Have you ever smoked cigarettes?” and “Do you smoke cigarettes now?” Because smoking initiation among adult never smokers is virtually zero, we exclude never smokers from the analysis and focus on the decisions of those current and former smokers to quit or continue smoking.

Our results show that adult smokers indeed form their beliefs about longevity differently from what the rational expectations assumption predicts; and this difference lies mainly in the economic and statistical importance adult smokers attach to various determinants of their survival. For example, objectively (i.e., under the rational expectations assumption), having bad health is the largest threat to one’s survival, having a long-lived parent can only “cancel out” half of the detrimental effect of smoking, and being a smoker is equivalent to being at least four years older in terms of its negative effects on survival. Subjectively, however, having bad health no longer matters the most for one’s survival; it is actually similar in magnitude to having a long-lived parent, which in turn can “cancel out” more than half of the negative effect of smoking. And smoking, subjectively, is only equivalent to aging for about two years. 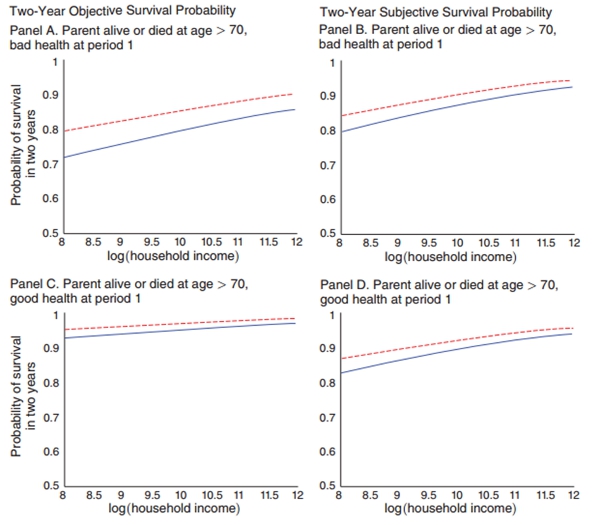 We further consider a counterfactual experiment where adult smokers’ subjective longevity expectations are set to be the same as those if they had rational expectations. In this case the average smoking rate would be eight percentage points lower than the level observed in our sample (see Figure 2). 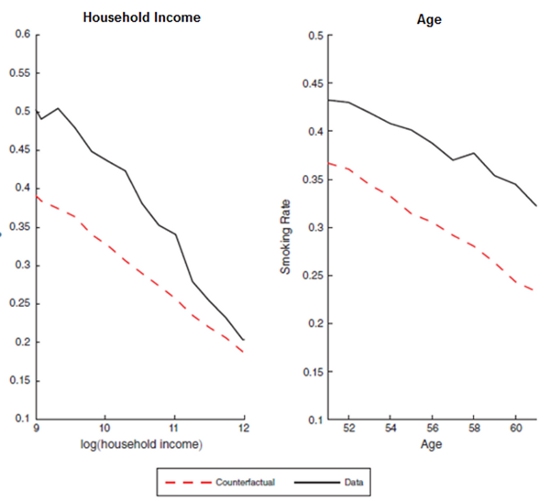 If we believe individuals have made systematic mistakes in their subjective expectations, then the reduction in smoking rates predicted shows what can be achieved by public policies aimed at further reducing smoking rates, such as an information campaign that matches individuals’ subjective survival expectations with the objective ones. Actually, some simple back of-the-envelope calculations show that this reduction in smoking rates could mean a gain in life years worth $3.07 trillion. And this number does not yet include the costs of externalities associated with cigarette consumption, such as air pollution or second-hand smoking.

This article is based on the paper, ‘Dynamic Implications of Subjective Expectations: Evidence from Adult Smokers’ in the American Economic Journal: Applied Economics.