Every year, the U.S government gives billions in financial aid for people on low incomes who want to go to college. But is this federal spending actually effective in closing the education gap between low and high income Americans? By examining the period between 2001 and 2006, when those who had been convicted of drug offenses were banned from federal aid, Emily Owens and Michael Lovenheim find that without aid, students are forced to delay their college entry by two years, and are generally less likely to enroll in college. They also find that the ban on aid did not deter young people from committing drug offences.

Getting a college education is one of the best investments someone can make.  The U.S. Bureau of Labor Statistics reports that, in 2012, the average person with a four year degree earned over $20,000 more than someone with only a high school degree.  Even taking a few college courses is associated with an income boost, to the tune of almost $4,000.  That’s not even taking into account unemployment, which may be more common among people with lower education levels. While the returns to higher education are large, and probably getting larger, the cost of those college credits has also grown dramatically.  For middle- and lower-income families, the financial sacrifices necessary to continue their education can seem simply insurmountable.  Recent evidence suggests that 80% of children from families in the top 25% of the income distribution attend college, while only 29% of those from the bottom income quartile do so.

Here’s where the U.S. federal government enters the picture: Since the 1970s, the U.S. government has given out financial aid to people who want to go to college, in the form of grants and low-interest loans.  It’s a lot of money: in 2012, the U.S. government gave out over $147 billion to people who filled out the Free Application for Federal Student Aid or FAFSA for short.  As the name implies, it’s free to apply for government help, and the grants and loans are “need based,” meaning that people with fewer financial resources qualify for more generous aid. The goal of federal financial aid is to support college enrollment among low-income students in order to give all academically qualified students, regardless of income, the opportunity to go to college if they want to. A natural question to ask is whether or not this federal spending is actually closing the large education gap that exists between low- and high-income Americans. By examining the deliberate exclusion of those convicted of drug crimes, we find that college enrollment of recent high school graduates is in fact responsive to eligibility rules in the federal ﬁnancial aid system. 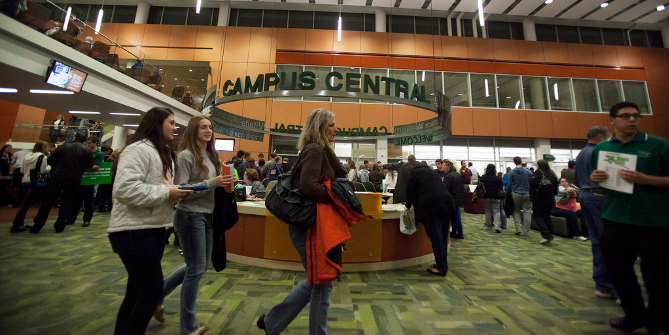 In part because virtually everyone in the U.S. can apply and is subject to the same financial aid rules, it is generally very difficult to tell whether or not the student aid program is actually working.  It’s possible that most people decide to go to college before they apply for aid, and the timing of the financial aid application makes it very difficult to know what college costs or how much aid one is eligible for prior to applying for college. Since the major reason financial aid varies across students is family resources, simply comparing college enrollment among students who qualify for a lot of assistance to enrollment among those who qualify for little will lead to a very misleading picture of how financial aid impacts college investment behavior. While it may not be a bad thing to give low-income college students extra money, if financial aid recipients would go to college no matter what, the program isn’t doing what it is intended to do: increase the number of low income students who go to college.

An ideal test of whether or not the FAFSA program is working would be to randomly prohibit some students from applying, and see whether or not they enroll in college anyway.  While that is unlikely to actually happen (for good reason), we identified a situation where it almost did.

In order to figure out whether or not federal aid was actually increasing college enrollment, we looked at educational attainment in the 1997 National Longitudinal Survey of Youth, (NLSY97), which is a nationally representative sample of people who were between 14 and 21 in 1997.  Each person in the survey was interviewed each year from 1997 to 2009, and each year they are asked about both their interactions with the criminal justice system, and whether or not they are in school.

The first thing you should ask in this situation is whether or not the 1998 amendments reduced drug crimes among high school students.  If some people stop using or selling drugs because of the law change, then it’s not really fair to compare drug offenders to non-drug offenders over time, since the pool of people who make up drug offenders is changing. As the stated purpose of the law change was to deter youth from engaging in drug-related activity, this outcome is of interest in its own right. In order to test this, we used data on arrests and convictions for drug-related crimes among high school students to examine whether students were less likely to be arrested or convicted of a drug crime when they were subject to the new financial aid rules. We find no evidence that this rule deterred students from engaging in drug-related crimes.

We also use the data in the NLSY97 to predict whether or not a student would go to college right after high school, based on things like their parent’s educational attainment, their aptitude scores, and their gender.  As you can see in Figure 1, the predicted “enrollment gap” between people with and without drug convictions is actually shrinking a little bit during this time period. That is, the composition of drug offenders is becoming more, not less, advantaged over time. 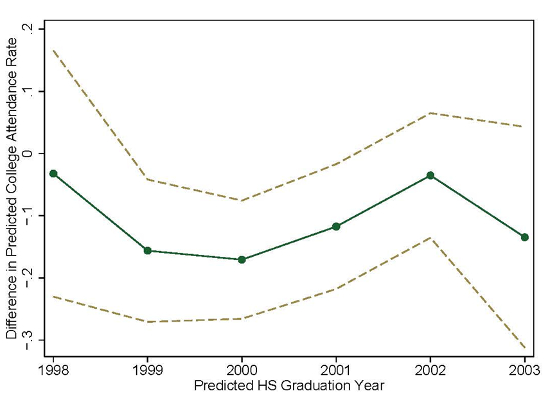 Source: Author’s calculations from the 1997 National Longitudinal Survey of Youth as described in the text. The ﬁgure shows the difference between yearly averages predicted attendance rates between non-convicted and convicted respondents. The dotted lines show the bounds of the 95% conﬁdence interval for each year’s estimated difference.

When you look at what actually happened to college enrollment, however, you get a very different story.  Figure 2 shows the actual college enrollment rates over time.  Rather than attend college at higher rates than before, the fraction of people convicted of drug crimes plummets once they are no longer eligible for Federal aid.  The likelihood a student convicted of a drug crime attends college within two years of high school graduation declines by 61% after the law is changed. The long-run effect on college enrollment is smaller: our results show the law change effectively introduced a “double gap year” between high school and college for most drug offenders who would have attended college. The two-year delay we find is consistent with the structure of the law, as the 1998 law prohibited them from receiving financial aid for this period of time. 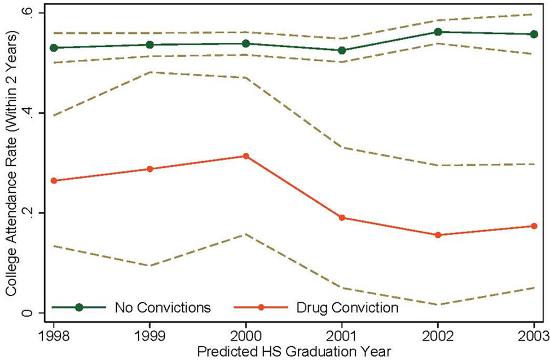 Source: Author’s calculations from the 1997 National Longitudinal Survey of Youth as described in the text. The dotted lines show the bounds of the 95% conﬁdence interval for each year’s estimated difference.

From a policy perspective, it’s not clear that the 1998 law was very effective at preventing crime, and it may have been produced worse outcomes for many college-oriented students from disadvantaged backgrounds.  For one, we don’t find any evidence to suggest that it actually reduced the rates of drug offending.  Instead, it simply prevented students from going to college. While some high school students choose to take “gap years,” during which they volunteer or work before college, it’s not clear that these “double gap years” were very productive for these students. If anything, the data tell us that high school students caught up in this law were more likely to have a child, less likely to be working, and more likely to be re-arrested than drug offenders who graduated before the law went into effect.  Perhaps of highest concern, we find some evidence that affected students were more likely to be re-arrested as well.

There are good reasons to punish people who break the law; we are not suggesting that criminals should be “coddled” by the justice system, or that we shouldn’t be rewarding students from tough backgrounds who keep themselves out of trouble.  At the same time, teenagers make mistakes.  Financial aid isn’t just a handout – it’s a way to help those trying to break the cycle of poverty by bettering themselves through education.  It’s not clear what society gains by turning its back on those legitimately trying to turn their lives around.

This article is based on the paper Does federal financial aid affect college enrollment? Evidence from drug offenders and the Higher Education Act of 1998 in the Journal of Urban Economics.