This book brings together recent essays and reporting by labor journalist Steve Early. The author aims to illuminate the challenges facing U.S. workers, whether they’re trying to democratise their union, win a strike, defend past contract gains, or bargain with management for the first time.  Melanie Simms writes that the insider perspective offered in this book will add to our understanding of how and why unions have contributed to the creation of specific patterns of disadvantage and exclusion for workers and for citizens.

Save Our Unions: Dispatches from a Movement in Distress. Steve Early. Monthly Review Press. February 2014.

Steve Early is a well-known commentator on the complex world of US trade unionism. His analyses are often provocative and always well-informed as he has worked in and around the US labor movement for more than 40 years. This is his third book since he retired from the Communication Workers of America (CWA) union. Evidently he is a man who intends to use the freedom of retirement to stir up debate.

As the subtitle suggests, the book brings together a series of previous pieces he has written for a range of audiences. Typically, they are from the journals, newspapers and websites that cover US labor issues: Labor Notes, Huffington Post, Working In These Times etc. And the tone of the dispatches taken as a whole is distressing. The reader is undoubtedly left with a strong view that the US labor movement is in very deep trouble and that strategies to plot a future course have been ill-fated.

Early is passionate about working people having the opportunity not only to have a say in their working lives, but to act as a countervailing power to corporate America. Readers unfamiliar with how deeply entrenched the interests of corporate America are within political institutions only have to look at the recent intervention of the Republicans in the vote of workers at Volkswagen’s plant in Chattanooga, Tennessee. There, managers were keen to allow the United Auto Workers (UAW) representation rights. Senior Republican politicians and lawmakers made it very clear that, in their view, such a move would harm job creation and workers subsequently voted against the proposal on a narrow margin. The ballot is currently being appealed, but the point is clear: anti-union voices are deeply embedded in political institutions and they carry a lot of weight.

Early is also clear that unions are not blameless in creating their own troubles. Historic links with organised crime, continual (often failed) efforts to improve internal democracy, and a poor track record on recruiting and integrating marginalised workers have all harmed the movement. He explores in some detail examples where reform from the rank-and-file has been squashed by well-funded national leaders. He is also clear that national leaders can make decisions that weaken and undermine local campaigns in processes that are too often murky and poorly explained. This is a brave position for someone who was a long serving national representative within his own union.

For me, the most revealing section of the book is his discussion of healthcare. In a short but informative chapter, Early outlines the complex and intersecting ways in which healthcare is a union issue. In the USA health insurance is typically one of the first things negotiated when a union gains recognition, unionisation therefore brings very real and immediate costs to companies. In a context where even an unfortunately timed minor illness can plunge any worker into a spiral of debt, healthcare matters. When only around 35% of public sector workers and fewer than 7% of private sector workers are unionised, healthcare matters a lot.

Obamacare (or, to give it its official title, the Patient Protection and Affordable Care Act) extends affordable healthcare to many citizens, but Early raises some important weaknesses of the wider approach. One problem is that from 2018, more advantageous health plans such of the kind typically negotiated by trade unions, will be taxed. As a result, some large employers are attempting to negotiate protections downwards in advance of the 2018 date in order to avoid the tax. Unions are not keen to concede, but recognise that in some cases there may be trade-offs between so-called ‘Cadillac plans’ and jobs.

In another section of the same chapter, Early highlights the often poor labor conditions on which the highly profitable healthcare industry is based. Campaigns to unionise hospital workers, home care helpers and others have been long-running struggles to ensure that health workers have access to some of the protections they are employed to provide to others. Another serious concern is the growing interest of corporate America in the ‘well-being’ of their employees. Companies increasingly see it as their business to incentivise employees to stop smoking, lose weight and take exercise. Why? Because healthcare protection is expensive and these large companies are the ones that typically do provide health benefits. So ensuring employees reduce their health risk reduces those costs. Of course, this can also become punitive and can act as a tax on employees who are overweight, inactive and/or smokers. Unions that have agreed to well-being programmes can therefore find themselves colluding in some highly draconian measures to monitor employees’ behaviours inside and outside work.

This chapter very effectively highlights the complex interactions between different aspects of state intervention, labor markets, service markets and unions that create specific patterns of disadvantage and exclusion for workers and for citizens. Overall, the book adds to our understanding of how and why unions have contributed to some of those. In that regard, it gives us very clear insight into the dynamics and tensions within unions at both the macro and micro levels.

What the book lacked, however, was an over-arching narrative. It is, presumably, deliberate that the author has chosen not to give any comment on how and why he has selected particular pieces to appear in this book, nor is it clear beyond the chapter titles how he wants the reader to link them together. At its most problematic, therefore, the book can be read as a rather unfocused series of criticisms of the unions, and of the US political and corporate systems more widely. It is left to the reader to decide what the most pressing problems are and how they might be addressed. Non-US readers also need to be aware that the book assumes considerable knowledge about the US labor movement and politics, so parts may be difficult to follow without some previous understanding. Overall, though, I was grateful for the perspective of an insider who has such deep knowledge. What future US unions have is an entirely different question and one that remains to be answered. 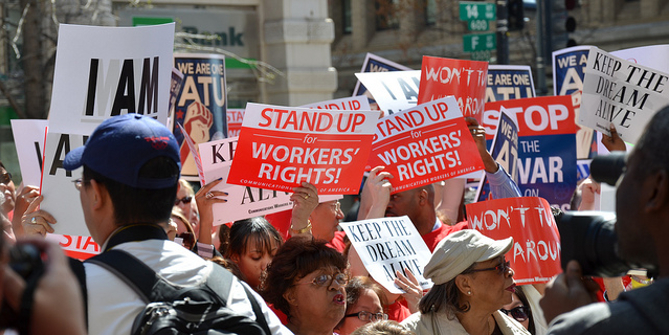