On April 7th, the people of the Canadian province of Québec will go to the polls in a snap election called by the governing Parti Québécois. Joel Suss argues that the election and its timing is an attempt by the Parti Québécois’ leader Pauline Marois to take advantage of support for its controversial charter of secularism, which would ban all displays of religious affiliation in public institutions. He writes that if the Parti Québécois is successful in its bid for re-election, Québec may soon be seeing a third referendum on the province’s future within Canada.

Shortly after winning enough seats to form a slim minority government in September of 2012, the Parti Québécois (PQ), which calls for the separation of Québec from Canada, promised to serve their term in full. But it comes as no surprise that 18 months in, the leader of the PQ, Pauline Marois, has opted to hold snap elections in early April. With polls showing the party in majority territory, the PQ released their 2014-2015 budget that read more like a campaign manifesto. When the opposition parties said they would not support the budget, Marois had her excuse to call for a vote.

Rather than work with the other parties and govern in the interests of all Québecers, it has been clear in these past 18 months that the PQ has been solely concerned with setting the stage for an election. Exhibit 1: the charter of secularism. The PQ has proposed to ban all displays of religious affiliation in public institutions. Kippas, hijabs, turbans, and (large) crosses would no longer be permitted to be worn by doctors, teachers and librarians. Incongruously, small crosses will still be permitted, logically necessitating the establishment of guidelines and perhaps tape-measure wielding authorities to ensure compliance. In a province that already contains what many see as an overzealous cadre of language police, or ‘tongue troopers’ as they are colloquially known in the English-speaking neighbourhoods of Montreal, this would not be seen as unusual.

While many inhabitants of multicultural Montréal may find it hard to believe, the charter of secularism is a popular measure, with over 60% in support. It is responsible for the PQ’s rise in the polls in the last several months, appealing to older voters and those in the suburbs of Montréal and rural regions where many of Québec’s seats are in play. It is therefore the central plank in the PQ’s re-election campaign. It is also a deeply cynical political manoeuvre that inflames xenophobic sentiment and widens existing divisions in a province already scarred by such disfigurements.

The charter of secularism has provoked many ugly incidents since its announcement in May last year: A cell-phone video captured a man berating a young, Muslim women for wearing a headscarf on a public bus, telling her to go back where she came from. Worse, in January the tragic death of a woman whose scarf got caught in a Metro escalator was headlined as ‘Woman strangled by her own hijab’ in the rabidly nationalistic Journal de Montréal, contravening police reports on the incident. 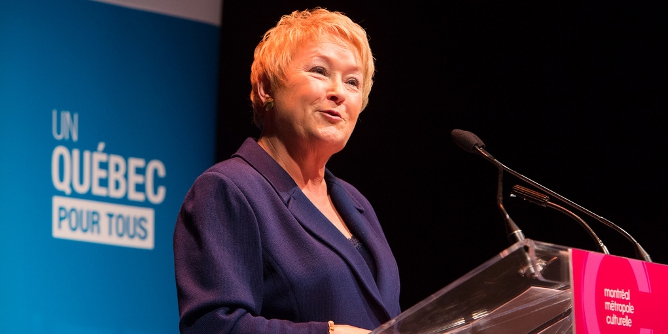 For the opposition Liberal Party of Québec, whose political stronghold on the island of Montréal means they have completely rejected the charter of secularism, their hope lies in playing up the economic incompetency of the PQ and convincing voters that they’re best able to bring about a prosperous future. There is certainly much fodder: Stats Canada released its latest jobs figures showing that Québec lost 26,000 jobs in February, continuing its downward trend from 2013. Moreover, in its time in government, the PQ has not been able to deliver on its promise to balance the budget, with public debt levels continuing to rise unsustainably, now standing at $175.5 billion (around 49% of GDP).

Enter Pierre Karl Péladeau, the thin-skinned media magnate whose declaration to run for the PQ in the St-Jérome riding has been roundly described as a ‘game-changer’, and not just from Péladeau’s own TV and print news sources. The PQ hopes that Péladeau, who has declared he intends to retain his controlling share in the conglomerate Québecor, will bring with him to the PQ a much needed air of economic competency.

But he also brings with him a lot of baggage and controversy. At the Journal de Montréal, he locked-out employees for more than a year and has brought other unions to their knees. Enjoying a near media monopoly in the province, he is also known for destroying the careers of anyone who crosses him or so much as makes a joke at his expense. For the PQ, a centre-left party with traditional allegiances with the labour movement, the choice of a union-busting businessman strikes many as perverse.

In pulling out all the stops in the pursuit of a majority, Pauline Marois and the PQ are playing a dangerous game. With the election looming on April 7th, the PQ is stirring the hornet’s nest of identity politics and is hoping that the selection of Péladeau will draw more votes than it alienates.  There are small signs of cracking: the Premier, always careful about public appearances, was recently confronted and forced to engage in an impromptu debate with a young law student, Samar Assoum whilst making a campaign appearance. In a video that has since received much attention, the student criticises the charter and points to its unconstitutionality:

The stakes of this election, for Québec as well as the future of the Canadian federation, are immensely high. A majority government for the PQ would almost certainly mean a third referendum on Québec’s future within Canada, bringing with it the uncertainty that has caused economic damage in the past. With polls showing that 60% would vote ‘No’ if a referendum were put to them today, Marois has remained coy and elusive about her plans for another referendum, saying that she’ll call one ‘when the time is right’. But the markets are already reacting to the prospect, a report by Bloomberg finds that Québec’s borrowing costs are rising as the prospect of separation is reawakened.