While few would doubt that the Internet is now an important component in any election, especially the presidential, what effects does a candidates’ web presence have on their electoral chances, and is this something that they are able to influence? Using data from the 2008 presidential nominations, Dino P. Christenson, Corwin D. Smidt and Costas Panagopoulos investigate how candidate’s web presence differs from traditional indicators of campaign performance and if it can help them to gain greater financial and electoral support. They find that campaign frontrunners have a limited ability to control their web presence, but that outsider candidates can have more success. They also show that candidates with a greater web presence see greater successes in fundraising.

We have witnessed a massive technological change in the development and use of the Internet in political campaigns.  These changes likely benefit candidates with broad or intense national appeal, regardless of their support from party-insiders. The low costs and social nature of Internet communication have motivated astute observers to suspect that it is a “game changer” that frees candidates from the burdens of fundraising and party status that plagued previous failed nominations.

In particular, there is a growing belief that the Internet has the potential to help equalize the playing field between long shot and frontrunner candidates in presidential nomination contests. The Internet affords candidates unprecedented opportunities to interact with voters, craft and deliver targeted and unmediated communications, and inform and mobilize citizens. This unique and fairly recent feature of campaigns, which we call a candidate’s web presence, may act as a counterpoint to decades of change in the selection process.

Since the McGovern-Fraser reforms in the late 60s opened up the presidential nomination process, the political parties have slowly but steadily changed back the nature of these campaigns.  Today scholarship suggests that a candidate’s level of party-insider support and national polling status before the primary season even gets underway practically determine the nomination. Indeed the demands of a relatively compressed and frontloaded primary calendar make it difficult for long shot candidates to compete with early frontrunners and anointed party favorites.  From this perspective the modern selection process appears only minimally democratic and clearly at odds with the objectives of the nomination reforms.

In recent research, we evaluated two related questions on the role of the Internet in nomination campaigns in the 2008 presidential nomination contest. First, to what extent is a candidate’s presence on the web (calculated from their reach across social media, blogs, search engines, candidate websites, and other web forums) different from traditional indicators of campaign performance, like polls and media coverage? Second, does the Internet make a difference? That is, can web presence help candidates gain greater financial and electoral support? 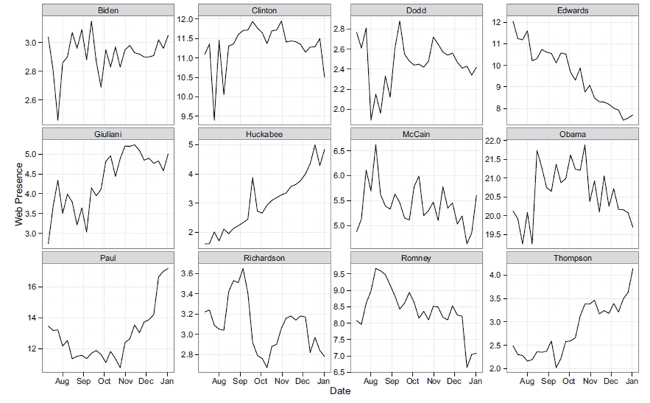 We find that web presence, graphed for each of the major 2008 nomination candidates in Figure 1, is a largely unique facet of campaigns, reflecting different campaign dynamics than either media coverage or popular support.  Instead it is more responsive to factors of deeper campaign engagement, like campaign spending on travel and direct marketing.

Campaigns, however, are limited in their ability to control their candidate’s web presence. As shown in Figure 2, long shots, like Fred Thompson, Bill Richardson, and Christopher Dodd, were able to spend their way into having a bit of presence on the web. On the contrary, frontrunners and those with relatively high levels of web presence to begin with, like Barack Obama, Hillary Clinton, and Ron Paul, were largely unable to affect their web presence through campaign spending, media coverage, and general campaign activity. Instead, frontrunners’ presence on the web reflects an organic appeal largely beyond the control of the campaign. Fortunately for long shots, it appears that there are some things frontrunners cannot buy. 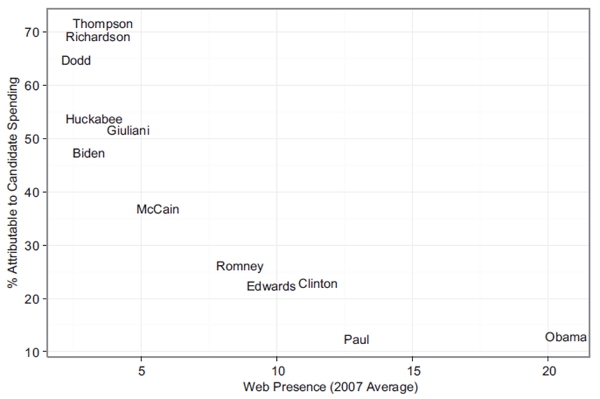 Much has been claimed about the ability of the Internet to cheaply and effectively communicate to supporters to facilitate greater amounts of candidate contributions and mobilize candidate support. The left graph in Figure 3 plots out each candidate’s average web presence score by the total amount of contributions they raised heading into the primary season (over the third and fourth quarters of 2007).  It is clear that success on the Internet correlates with greater financial receipts.  In addition, by comparing the same candidate across quarters, we also see that gains in quarterly receipts are associated with higher web presence.

The right graph in Figure 3 similarly evaluates the claim that the financial benefits of connecting with individuals on the Internet are even stronger among small donors—those who gave under two hundred dollars total. Here we also find a positive relationship between quarterly contribution amounts and web presence.  More sophisticated tests of these relationships with candidate and covariate controls further support arguments that candidates with greater web presence are more successful at raising funds. Across the candidates and on average for the quarter, a one-unit increase in a candidate’s web presence corresponds to a $650,000 increase in total contributions and $410,000 in small-donor contributions.

Another aspect of the claimed financial benefits of web presence is that it allows candidates to receive a large influx of funds within a very short period of time. Looking at weekly variations in the primary contests period we find that a one-unit increase in a candidate’s web presence corresponds to an additional $96,000 in weekly contributions on average in 2008.

Adding complexity to the story, we suggest that primary wins alone do not directly provide significant financial benefits to candidates. Instead, the financial benefits of a victory are conditional on a candidate’s level of web presence. Only candidates with a relatively high web presence reap contribution gains from a win in the previous week. For example, Mick Huckabee benefitted from his increased news coverage following his Iowa win, but the win itself produced no contribution gains in the following week because of his low web presence. However, even after controlling for gains in media coverage, Obama’s Iowa win combined with his high web presence generated an additional gain of $3.2 million in the following week. Thus, the web enables candidates to translate early victories into financial gains that would otherwise be lost. 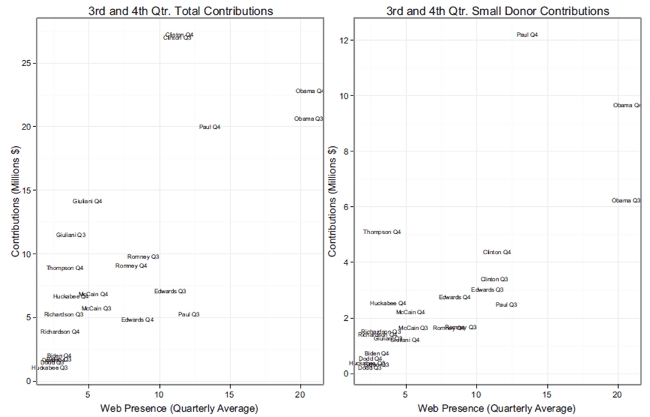 In all, the Internet has the potential to help equalize the playing field by combating some of the recent institutional changes in the primary calendar thought to favor frontrunners. Frontloading has meant that candidates must compete earlier to gather funds and organize campaigns, which typically benefits those with party-insider support and preexisting donor networks. Likewise, compressed primaries and caucuses has kept long shots without nationally organized campaigns in place from converting momentum from strong early performances into fundraising before the next caucus or primary.  As we show, however, the Internet is bucking this trend by providing fundraising and organizational benefits to long shots, particularly with regard to small-donor contributions. The end result is greater control of the nomination process in the hands of grassroots activists and campaigns, instead of the party.

This article is based on the paper Deus ex Machina: Candidate Web Presence and the Presidential Nomination Campaign in Political Research Quarterly.

Corwin D. Smidt – Michigan State University
Corwin D. Smidt is Assistant Professor in the Department of Political Science at Michigan State University. He studies American electoral politics, presidential primaries, the political news media, campaign politics, and dynamics in American political behavior. His current research investigates the extent to which candidates, the news media, and voters respond to one another during political campaigns.

Costas Panagopoulos – Fordham University
Dr. Costas Panagopoulos is Assistant Professor of Political Science and Director of the Center for Electoral Politics and Democracy and the graduate program in Elections and Campaign Management at Fordham University.  Dr. Panagopoulos, a leading expert on campaigns and elections, voting behavior, public opinion, and campaign finance, was part of the Decision Desk team at NBC News during the 2006 election cycle. A former candidate for the Massachusetts State Legislature in 1992, Dr. Panagopoulos also offers courses on campaign management and strategy, message development, and political communication.