Gang members are entangled in a web of violence that leads the gunman of today to become the victim of tomorrow.

Gang members are entangled in a web of violence that leads the gunman of today to become the victim of tomorrow.

While the media often portrays a stark line between the victims of crime and offenders the reality is much more blurred. New research from David Pyrooz, Richard K. Moule, and Scott H. Decker find that this is especially the case for gang members who find that they are twice as likely to be both victims and offenders as non-gang members. They argue that gang membership is a large risk factor in this victim-offender overlap, as single acts of violence between gang members often lead to acts of retribution between gangs as a whole.

Today’s criminal offender is tomorrow’s victim, and today’s victim is quite likely to be tomorrow’s criminal offender. Of course, not all offenders become victims, nor do all victims become offenders. But countless studies have found what is known as the “victim-offender overlap.” In other words, it is the exception to find individuals who are uniquely victims or offenders, while the norm is to find individuals who are victim offenders and victims. Understanding this criminological fact is important because of the importance of violence in the everyday lives of victims and offenders, along with the families and communities who indirectly experience this violence. The victim-offender overlap is not unique to any particular demographic group, socioeconomic status, historical context, culture, or country.

There are two explanations for the overlap in victimization and offending. The first explanation focuses on the characteristics of individuals that are generally stable or unchanging, such as impulsivity or intelligence or risk-seeking. Whether they are biological or psychological in nature, the argument is that these differences continually put people in bad situations that lead to crime or victimization. This means that the roots of victimization and offending are neither related nor random, but are a product of the same underlying source. The second explanation emphasizes a “contagion” between offending and victimization. That is, engaging in criminal behavior puts someone at risk for victimization, while victimization puts someone at risk for committing a crime. One can only imagine how two people, let’s say Joe and John, could quickly swap roles if Joe catches John stealing his bicycle. In the contagion explanation, there are elements of risky and deviant lifestyles (e.g., prostitution, drug dealing) and a value system that supports interpersonal violence (e.g., the code of the street).

Gangs are durable, street-oriented youth-oriented networks with a collective identity that generally involves criminal and deviant behaviors. It is well known that gangs are involved in a great deal of crime. But they also experience a great deal of victimization. In the US, for example, gang members in large cities have homicide rates that are 100 times greater than those of the general public. But little is known about the overlap in offending and victimization among gang members and whether the same patterns and explanations common to the victim-offender overlap in general could be applied to the unique context of gang membership that entraps about 2% of youth and young adults in the US at any given time.

As part of a study on gangs and gang member behavior that was partially sponsored by Google Ideas, we examined the victim-offender overlap by interviewing over 600 urban gang and non-gang youth and young adults in five large US cities: Cleveland, Fresno, Los Angeles, Phoenix, and St. Louis. These are large cities with large pockets of concentrated disadvantage, relatively high rates of crime and violence, and several decades of gang activity. Our argument was that the current explanations for the victim-offender overlap left much to be desired when applied to gangs. It is not that gangs aren’t comprised of impulsive youth who live high-risk lifestyles, but that gangs are equipped with a collection of group processes that better facilitate trading places as victim and offender. These group processes include a shared history of collective identity, unconventional forms of status acquisition and maintenance, normative orientations toward criminal involvement and retaliation, and extra-individual liabilities that are assumed when someone becomes a gang member. 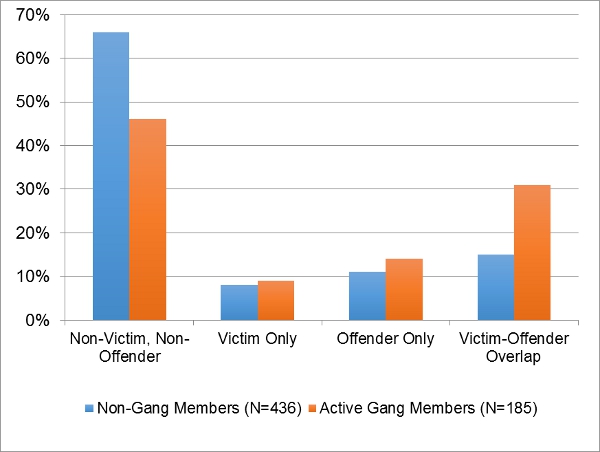 The last point bears repeating: Gang membership is a risk factor for the victim-offender overlap above and beyond directly engaging in violence or directly experiencing violent victimization. Figure 2 illustrates what is important for readers to understand about this finding and the nature of the group processes in gangs. If a member of gang A, in blue, is shot by a member of gang B, in red, that violence is generalized to all members of gang A, as a result of collective gang identity. The pool of offenders from gang A expands well beyond the shooting victim, as symbolized in the right side of Figure 2. The normative orientation of gangs calls for retaliation, which is generalized to all of gang B and not just gang B’s triggerman. All members of gang B shoulder the liability of the assault, expanding the pool of potential victims and thus explaining the sturdy contribution of gang membership to the victim-offender overlap. The motto, “we are all in this together,” extends to offending and victimization. 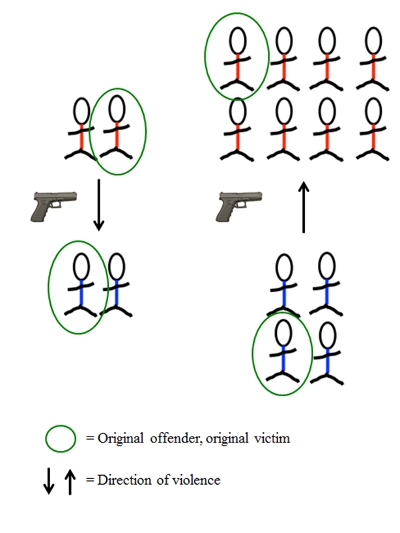 Among gangs, violence begets violence. Violence interventions face a difficult task, as even the best efforts to reduce gang violence can be disturbed by seemingly trivial incidents that lead to new waves of retaliation. Gangs are unique in that they have the group processes and the associated “manpower” necessary to sustain such high levels of violence. This means that interventions to reduce violence must target offenders and victims. Because individuals move easily between roles of offender and victim in an “endless gang of revenge,” interventions that draw on the collective liability of the gang should pay dividends by diminishing motivations for retaliation and, by extension, potentially reduce gang solidarity. Doing so is a potential solution to one of the continuing and most frustrating challenges that city officials face when confronted with emerging and longstanding gang problems.

This article is based on the paper The Contribution of Gang Membership to the Victim–Offender Overlap in The Journal of Research in Crime and Delinquency.

David Pyrooz – Sam Houston State University
David Pyrooz, PhD, is an assistant professor in the Department of Criminal Justice and Criminology at Sam Houston State University. He studies gangs and deviant networks, developmental and life course criminology, and violent offending and victimization. He is the author of Confronting Gangs: Crime and Community (2014, Oxford University Press).

Scott H. Decker – Arizona State University
Scott H. Decker is foundation professor of the School of Criminology and Criminal Justice at Arizona State University. His main research interests are in the areas of gangs, criminal justice policy, and the offender’s perspective. He most recent books include Drug Smugglers on Drug Smuggling: Lessons from the Inside (2008, CHOICE Academic Press Book of the Year), and Criminology and Public Policy: Putting Theory to Work (2010, with Hugh Barlow).