Last December, President Obama warned of ‘dangerous and growing inequality’ in America, reflecting growing concerns that inequality is increasing, especially in relation to other countries. Peter K. Enns, Nathan J. Kelly, Jana Morgan, Thomas Volscho and Christopher Witko investigate the role of what they argue is a major contributing factor to rising inequality: the tendency for the current political and economic conditions to maintain the policy status quo. They argue that the increasing political polarization that makes it harder for Congress to pass laws in turn contributes to rising inequality, especially when inequality is already growing rapidly.

Income inequality has increased in most affluent nations over the last few decades, but the United States is an outlier—with rising inequality far outpacing that in other democratic countries. The U.S. is also an outlier in terms of the number of potential veto points built into the policy system, biasing policy toward the status quo. In recent research we looked at how this status quo bias in the policy system influences inequality, finding that contemporary political conditions make this bias worse, which in turn widens income inequality.

Some scholars argue that increasing inequality reflects the shift from liberal Democratic governments to conservative Republican governments, and there is a fair amount of empirical support for this contention (see work by Bartels and Kelly for instance). But since the 1980s inequality has increased rapidly regardless of which parties and ideological coalitions have been in control of government.  We think this seemingly inexorable march of growing inequality reflects, in part, the status quo bias in American policy making.

How can enduring and largely constant institutional features explain a fairly recent increase in income inequality? While always serious, the status quo bias in American political institutions is exacerbated under some political and economic conditions.  That is, the system experiences “conditional status quo bias” or CSQB. Currently, the growing polarization that leads to major ideological gaps between policy makers within and across institutions makes it even more difficult to enact policies that might address inequality.  Furthermore, CSQB has more serious consequences for inequality when inequality is growing rapidly, since this is when more dramatic policy action would be required to reverse it.

Inequality can certainly be actively increased by policies such as tax cuts for the wealthy or financial deregulation.  But Hacker and Pierson also suggest that “policy drift” –failing to adjust policies in response to changing economic realities – also contributes to widening income inequality through inaction.  For instance, neglecting to increase the minimum wage as it fails to keep pace with average wage growth contributes to inequality.  If top incomes are growing rapidly, then this failure to increase the minimum wage has even more important implications for inequality.  Of course, the minimum wage is only one such example, and there are many others (in pensions, healthcare, financial regulation, etc.).  It seems clear that the polarization we see within and across political institutions makes it more difficult to overcome policy drift and this likely contributes to growing inequality.

What do the data say?  To examine CSQB we studied how measures of the ideological distance between different policy actors and the volume of policy activity were associated with the share of pre-tax, pre-transfer income going to the top 1 percent of income earners from 1940-2007 using the Piketty and Saez data set of top world incomes.  As we can see in Figure 1, as the “filibuster pivot distance” (the ideological gap between the median Senator and the Senator that “controls” the filibuster, currently the ideological gap between the 51st and 60th Senator) increases, so too does the share of income going to the top 1 percent.  We see a similar pattern regarding Congressional policy output.  When Congress enacts fewer laws, inequality grows more rapidly (in the figure Congressional policy product has been inverted to more clearly show the relationship between a slow-down in policy and an increase in inequality).

In our statistical analysis, we control for confounders suggested in the economic, sociological and political science literatures on inequality.  We find that conservative policy changes (financial deregulation and top marginal income tax rate cuts), correspond with growing income inequality. Lower interest rates are also associated with a greater share of income going to the top 1 percent of earners. But even after controlling for these policy changes, we observe that when Congress is more productive the top 1 percent income share decreases.  In addition, we find that increasing ideological filibuster pivot distance is positively related to the share of income going to the top 1 percent. Other measures of ideological polarization did not show a similar effect, so our research suggests that the anti-majoritarian nature of the Senate, which has increased in recent years with the growing use of the filibuster, is particularly problematic.

The effect sizes for a one standard deviation increase in these variables can be seen below in Figure 2.  The lines with the black dot show the effects of the conditional status quo bias and policy variables when all other variables are at their means and the lines with the white dot in Figure 2 show the expected effect of the status quo bias variables when inequality is high (the share of income going to the top 1 percent is 1 standard deviation above the mean).  We see that as the share of income earned by the top 1 percent increases, the CSQB variables have an even larger effect. This finding suggests that policy stasis contributes even more to growing inequality when inequality is growing rapidly. 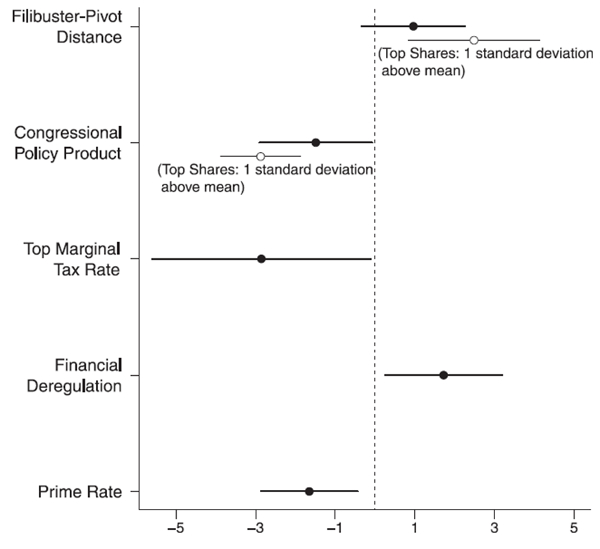 The gridlock and dysfunction characterizing American politics in recent years has important implications for growing income inequality.  It is well known that American political institutions have a built-in status quo bias.  What is perhaps underappreciated is that contemporary political conditions exacerbate this status quo bias, and that this affects income inequality.  Thomas Piketty argues in his influential book, Capital in the Twenty-First Century, that income inequality is likely to continue to grow in the future, and our research identifies precisely how U.S. policymaking institutions contribute to this process.   As inequality increases rapidly it would require ever more dramatic policy change to reverse it, but this dramatic policy change is increasingly unlikely.

Last year the Democrats weakened the filibuster for judicial nominees, and our research suggests that further weakening the filibuster would be a positive step toward reducing inequality in that the ideological distance between the 51st Senator and the pivotal Senator would typically be smaller.  However, completely eliminating the filibuster will clearly be politically difficult. Thus, barring some unforeseen events, the structure of U.S. policymaking institutions and current political conditions almost ensure that the accumulation of income and wealth at the top of the distribution is likely to grow into the future.

This article is based on the paper Conditional Status Quo Bias and Top Income Shares: How U.S. Political Institutions Have Benefited the Rich in The Journal of Politics.

Peter K. Enns – Cornell University
Peter Enns is Assistant Professor in the Department of Government at Cornell University. His research and teaching interests focus on public opinion, representation, and quantitative research methods. In particular, he is interested in whose policy preferences change, why, and whether government responds to these changes. He is also co-editor of the book, Who Gets Represented? (Sage, 2011).

Jana Morgan- University of Tennesse
Jana Morgan is an Associate Professor of Political Science and the Chair of Latin American and Caribbean Studies at the University of Tennessee. Her research focuses on issues of inequality, exclusion and representation, especially how economic, social and political inequalities affect marginalized groups and undermine democratic institutions and outcomes.