Sustained congressional investigations into the president can seriously erode their popular support.

Sustained congressional investigations into the president can seriously erode their popular support.

Recent years have seen increasing concerns over the influence of presidents on the policymaking process, often bypassing Congress through the use of executive orders. But Congress may not be completely helpless in the face if an ‘imperial presidency’. In new research, Douglas Kriner and Erick Schickler have examined 3,500 investigative hearings from 1953 through 2006 and finds that sustained congressional investigations into the president can be as damaging to their approval rating as a fall in consumer confidence in the economy would be.

Writing more than fifty years ago, the great legal scholar Edward Corwin wrote that the “history of the presidency is a history of aggrandizement.”  Corwin’s assessment rings just as true today.  To be sure, recent presidents have often found themselves frustrated legislatively.  However, when blocked in Congress, modern presidents have routinely struck out on their own, acting unilaterally in policy areas ranging from immigration, to environmental standards, to equal pay for women.  Particularly in the wake of the 9/11 attacks, presidents have exercised tremendous authority as commander in chief to unilaterally effect major changes in public policy, both at home and abroad.  Less jarring though equally consequential, presidents have also exploited their position at the top of the federal bureaucracy to exert great influence over policy implementation, insuring that their preferences (rather than those of the Congress on Capitol Hill) are often best reflected in a myriad of policy outputs.  These developments have led scholars and journalists alike to decry the advent of a new imperial presidency.

To be sure, Congress possesses the formal legislative tools needed to rein in a wayward president.  However, the contemporary Congress, decried as “broken” by many and saddled with an approval rating that in November 2013 plunged into the single digits, has often proved unwilling or unable to check the president legislatively.  Political science scholarship generally identifies the source of Congress’ institutional woes not in the failings of its contemporary leaders, but in a cold assessment of the legislature’s institutional shortcomings compared to the presidency.  Collective action dilemmas exacerbate any effort to mobilize 535 members split across two chambers to defend their common institutional prerogatives.  Moreover even when Congress does act, a legislative process riddled with transaction costs and super-majoritarian requirements (not the least of which being the two-thirds majority required to override a presidential veto) often doom such efforts to failure.  As a result, presidents are often held to be free to act as they will, knowing that Congress will almost certainly be unable to muster the requisite votes to compel a change in course.

But Congress can do more than legislate; it can also investigate.  American political history is replete with examples of prominent congressional probes of alleged wrongdoing within the executive branch, from Teapot Dome to inquests into “who lost China?”, from the Fulbright hearings on Vietnam to Watergate, and from Whitewater to Walter Reed.  Many of these probes are made-for-TV events, carefully calculated to shine a spotlight, literally and figuratively, on alleged abuses of power, and to bring public scrutiny and pressure to bear on the executive branch.

To do this, we coupled our data base of investigations with more than fifty years worth of aggregate presidential approval data.  Paying careful attention to the very real possibility of endogeneity (i.e. that investigations may influence presidential approval, but that a president’s approval rating may also increase the frequency and intensity with which Congress investigates the president) as well as potential time series complications in our data, we find strong evidence that investigative activity diminishes a president’s political capital.  Figure 1 summarizes the main effects from our model.  Our model estimates that a two standard deviation increase in investigative activity (20 days) decreases presidential approval, all else being equal, by approximately 2.5%.  This effect is comparable to that produced by a two standard deviation drop in the Index of Consumer Sentiment, a measure of the health of the economy long held to be one of the most important predictors of presidential approval.  Across multiple specifications, our results suggest that sustained congressional activity over time has the capacity to seriously erode popular support for the White House.

Figure 1: The Influence of Misconduct Hearings on Presidential Approval 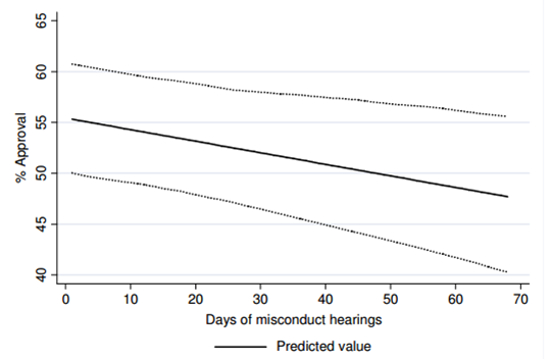 Note: Dotted lines delineate the 95% confidence interval, obtained from simulations, about the predicted values. The x-axis of the figure stretches to 70 days, since when multiple committees are holding hearings there can be more than thirty hearing days per month.  The average number of days of investigative hearings in a month in 1953-2006 is just over 9 (the median is 5), and the standard deviation is almost 11.

Finally, we supplement our analysis of polling data with an original survey experiment.  Half of our subjects read a mock news story about a congressional investigation (in one treatment, it was a Democratic Senate investigation, in the other it was a Republican House investigation) into allegations that President Obama was abusing his power by ordering the EPA to aggressively curb the emission of greenhouse gasses.  A quarter of our sample read the exact same mock news story; however, the allegation of presidential wrong doing was not attributed to Congress.  The final quarter of our sample received no information.  All subjects were then asked whether they approved or disapproved of President Obama’s job performance.  Consistent with our earlier findings, Obama’s approval rating was significantly lower among those who read of the congressional investigation than among those in the control group baseline who did not learn of any allegation of abuse of power.  Moreover, when Congress made the allegation, the negative effect on approval was significantly larger than when the very same allegation was made by another, non-congressional source.  Thus, Congress can lower public support for the president both by bringing charges of wrongdoing to the public’s attention, and by adding institutional credibility to those charges.

Ultimately, investigations are unlikely to restore an equal balance of power between the branches.  However, they remain an important tool (though one that Congress has used with widely varying frequency over time) with which Congress can retain some measure of constraint on an ascendant executive, even when legislative remedies are blocked.

This article is based on the paper ‘Investigating the President: Committee Probes and Presidential Approval, 1953–2006’ in the Journal of Politics.