On the surface, cutting business taxes would appear to be an obvious way for states to attract new business investment, and therefore growth and jobs. Soledad Artiz Prillaman and Kenneth J. Meier have studied business tax incentives across the 50 states over the past 30 years, and find that this is largely not the case, and that tax reductions can actually be harmful to state economies by reducing tax revenues and thus their ability to provide public services. They argue that given the already low tax burden on many companies, businesses are much more likely to decide on their location based on factors such as workforce education, land prices and public service levels.

Faced with a massive budget deficit in 2011, the state of Illinois proposed a substantial increase in business taxes. Wisconsin Governor Scott Walker gleefully responded by inviting Illinois businesses to relocate to Wisconsin. In 2013, Texas Governor Rick Perry called to slash business taxes by nearly $1.6 billion in order to make Texas competitive with other states. Like Governors Walker and Perry, many politicians believe that state tax rates affect business decisions. The idea driving politicians to make these declarations is that lower business tax rates will spur economic growth by encouraging businesses to locate in their state and generate jobs. In the wake of the 2001 and 2009 economic recessions states have turned to business tax cuts with 35 states cutting taxes to businesses in 2010 (see Figure 1). When competing with neighboring states, cutting taxes to businesses seems to be an easy way to stimulate the economy. But the cost of these policies for states is substantial amounts of lost revenue. Given the high costs of these tax cuts, it is imperative that the benefits they reap be clear and measurable. 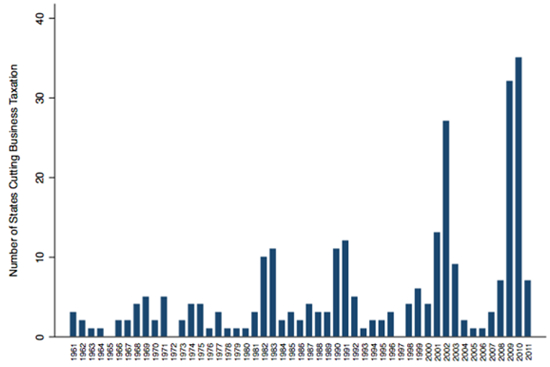 Studying the 50 U.S. states over the past four decades, we find that tax incentives to businesses prove unhelpful in stimulating economic growth and may even be harmful to state economies. Over the past 30 years, state policy has had little impact in determining state economic growth and that state politicians have little control over income growth and employment. In fact, business targeted tax cuts at best result only in more businesses and potentially worsen the overall economic atmosphere of the state. Politicians, such as Governors Walker and Perry, should look beyond the theoretical expectations and consider the overarching and empirical effects of these policies. If they did, they would find that slashing business taxes does not lead to economic growth, but rather results only in lower tax revenues.

What theoretical justifications are there for cutting business taxes? Businesses are rational; they will locate where they are best able to maximize profits. By decreasing the costs of doing business, lower taxes on businesses are more appealing and businesses will choose to operate in the states with the lowest level of taxation. A state that cuts taxes to businesses incentivizes businesses to move to that state, hopefully increasing employment and production. Then why would states not see economic growth as a result of cuts to business taxes?

For many companies, the cost of taxes is only a small percentage of the costs of production. In 2009, for example, business taxes in Alabama were only 1.89% of total corporate revenues. As a result, these tax cuts may be too inconsequential to influence mobility decisions. Additionally, cutting taxes to businesses does not necessarily mean that net businesses revenues will increase. If businesses pass the burden of the tax onto consumers through higher prices, then changes in tax policy will have no effect on costs.  Rather, when making investment decisions, businesses consider the availability and quality of a state’s public services, such as education, health, and infrastructure. Business targeted tax cuts, if unmet by increases in other taxes, can alter a state’s ability to provide important public services.

The primary goal of business tax cuts is business expansion and relocation. Our results suggest that fewer businesses leave a state when business taxes are cut. Existing businesses within a state are sensitive to fiscal policy, even if only modestly. The businesses most affected by tax cuts, however, appear to be so small that their effect on economic development is negligible. Instead, the education level of the workforce, the price of land and energy, the ideology of the government, and the level of public services all enter into the location decisions of businesses.

Over the last 30 years, decreases in the level of business taxation did not stimulate employment, job creation, or personal income growth. In fact, our findings suggest that state politicians are only able to stimulate employment through higher expenditures on infrastructure. Cuts to business taxes also have no effect on poverty. Instead national fiscal policy is more effective in redistributing income to the poor. 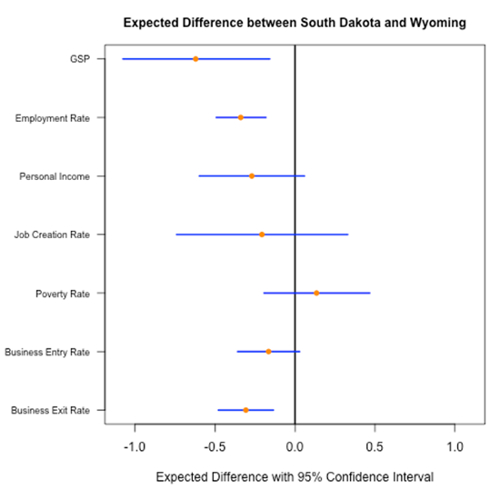 Contrary to expectations, we find that lowering business taxes may actually be harmful to the overall state economy. With countless state politicians enacting legislation based on the opposite belief, these findings should elicit some concerns. Although these policies may bring in businesses, these businesses are not generating growth. Instead, the reduction in state tax revenues limits the state’s ability to provide public services. Rather than cut taxes to businesses, state politicians can more effectively stimulate economic growth by cutting taxes to consumers and workers (sales and income taxes).

This article is based on the paper ‘Taxes, Incentives, and Economic Growth: Assessing the Impact of Pro-business Taxes on U.S. State Economies’ in the Journal of Politics.

Soledad Artiz Prillaman – Harvard University
Soledad Artiz Prillaman is a third year graduate student in the Department of Government at Harvard University. Her research focuses on comparative political economy, the politics of the welfare state, and economic development. She is interested in the effects of global development initiatives on public policy, and in particular on the provision of public social services and redistribution.