The past century has seen a massive expansion of education in the U.S, with the vast majority now graduating from high school and more than a quarter from college. At the same time, the wage gap between college and high school graduates has grown from 35 to 50 percent. By looking at the results of standardized test scores from two dozen 20th century studies, Todd Schoellman and Lutz Hendricks find that the expansion of education has led to a decline in mean test scores of high school graduates but not college graduates. The change in mean test scores explains why wages for high school workers have grown more slowly than the wages for college workers, and thus why the wage gap between the two groups has grown.

The 20th century saw an extraordinary expansion of education in the US. As Figure 1 illustrates, while 75 percent of men born in 1900 did not graduate high school, only ten percent of those born after 1950 did not. On the other hand just thirteen percent of those born in 1900 attended college, whereas more than half of those born after 1950 did. This expansion implies that the type of person who drops out of high school or graduates from college is different today than it was at the turn of the century. In recent research, we find that the changes in who graduates high school and college explain why the wages of college-educated workers have risen faster than high school-educated workers. 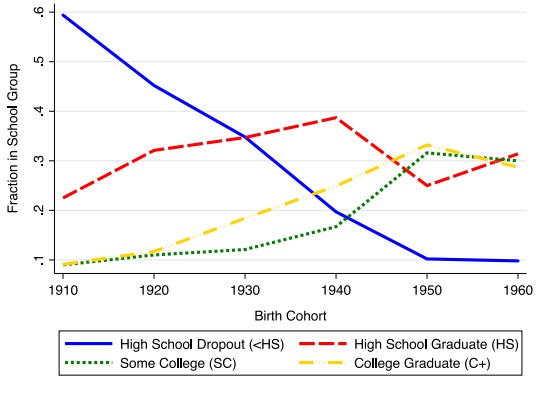 Author’s calculations based on the US Population Census.

A simple explanation for how an expansion of education affects wages is given in Figure 2. The idea is that students vary in ability, for example in their level of talent and preparation at the age when they start to make independent educational decisions, say age 16. A simplified view is that the most able students attend college at the start of the period (shown in gold), while the less able do not (shown in orange and red). In order to expand college it is necessary to admit some less able students (shown in orange), decreasing the average ability in college and lowering wages for college graduates. Further, since the new college enrollees were formerly the most able high school graduates, the average ability and wages of high school graduates would also decline. 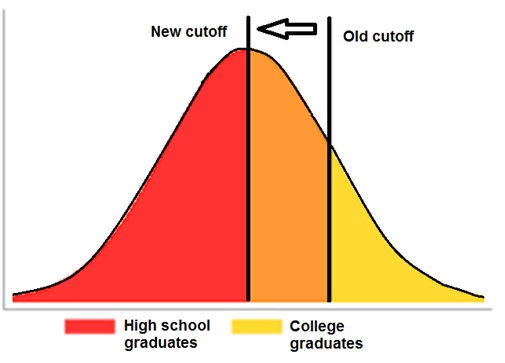 To establish this trend, we collected and harmonized the results of two dozen studies performed throughout the 20th century. In each study researchers administered a standardized test to a group of high school students, and then tracked them to learn whether they enrolled in college or completed their education with their high school degree. These studies allow us to compare the average standardized test scores for college-bound and non-college-bound high school seniors throughout the century. The results are shown in Figure 3.

Figure 3: Changes in Sorting Between High School and College-Educated Americans. 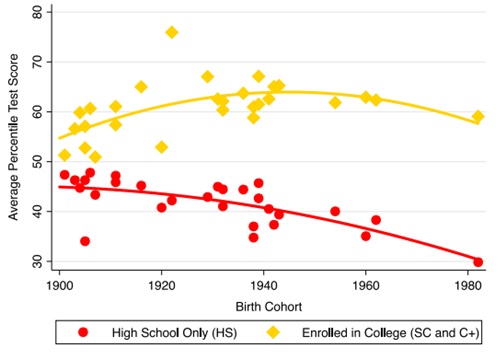 Author’s calculations based on two dozen studies conducted by educational researchers and psychologists.

We used a simple model to measure the importance of these trends. We constrained the model to match the relationships between standardized test scores, school decisions, and wages for recent cohorts, when large, nationally representative data are available. We then studied our model’s implications for earlier cohorts who were less strongly sorted by ability and had lower average educational attainment, as shown in Figures 1 and 3. We explicitly accounted for the fact that standardized test scores are only an imperfect measure of one type of ability.

We find that these trends play an important role in determining wage patterns. For example, it is well known that the wages of high school educated workers have grown slowly or not at all since the mid-1970s. Our work shows that much of this can likely be attributed to changes over time in the types of people who graduate high school but do not enroll in college. It is also well known that the wage gap between college graduates and high school graduates has grown (from 35 to 50 percent, by our calculation). We find that this entire rise can be attributed to the growing gap in ability and standardized test scores between the two groups.

An alternative way to phrase our results is that wages for high school educated workers would have risen faster, and the wage gap for college vs. high school workers slower, if the sorting of students had remained the same over time. This naturally raises the question of what has changed the way students sort, which is the focus of our ongoing research. We see at least two potential explanations.

First, the 20th century included large changes in how education was financed. In the early part of the century students and their families financed most educational expenditures themselves. This constraint prevented many high-scoring children from poorer families from enrolling. Grants, scholarships, and particularly student loans were widespread only in the latter part of the century. The introduction of these programs likely allowed able children from poorer families to consider college for the first time.

Our goal is to sort out the importance of these and other possible candidate explanations in our work. They play an important role in understanding who goes to college and their measured wage gain from attending college.