In February, workers in a Tennessee Volkswagen plant voted against union representation, something that William Lazonick and Tony Huzzard say is unfortunate. They write that to compete on the world stage, a strong employee voice in the workplace matters. Using case-studies of automotive companies in Germany, Sweden and the U.S., they argue that compromises between the financial interests of shareholders and the productive interests of employees can lead to considerable success. High-performance workplaces, characterized by “high road” jobs in which productivity improvements and pay increases go hand in hand, are critical to sustained competitive advantage.

In manufacturing plants all over the world, both managers and workers have discovered that when employees are involved in workplace decision-making, productivity rises. So in the United States, it made national news when in February workers at the Volkswagen auto plant in Chattanooga, Tennessee rejected representation by the United Automobile Workers (UAW) by a vote 712 to 626. Unfortunately, the Chattanooga workers said no to just the type of employee involvement in productivity improvement that will be necessary to sustain their jobs going forward. To compete on the world stage, a strong employee voice in the workplace matters.

The UAW’s Chattanooga campaign would have made Volkswagen the very first foreign car company to a have a unionized plant in the United States. More importantly, a victory for the UAW was a precondition for the creation of a works council at the Chattanooga plant — a form of worker-management plant-level collaboration for improving manufacturing productivity that is a fixture of German industrial relations, but virtually unknown in the United States. Through information-sharing and problem-solving, the managers and employees on a works council improve product quality, speed up production processes, and reduce materials waste. It’s a win-win.

If American workers want to ensure the competitiveness of their manufacturing jobs, they should jump at the chance of instituting this type of forward-looking arrangement, one that enables their voice to influence the productivity of the work that they do. A large body of evidence shows that the involvement of workers in enhancing productivity increases both the earnings of workers and the competitiveness of the products that they produce. There is fresh evidence of the importance of worker involvement in the productivity improvements that contribute to making their own jobs, and the companies for which they work, competitive on a global scale. 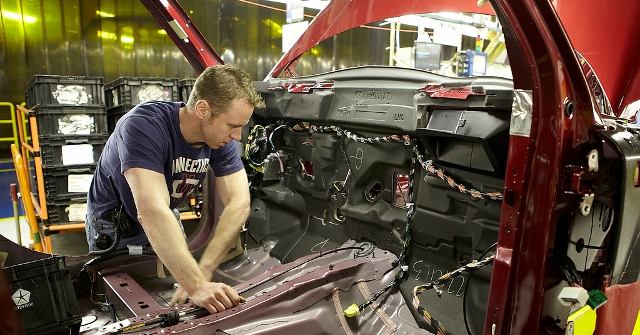 In-depth case studies of automotive supply companies in Germany, Sweden, and the United States — comparing governance regimes and work organization at the plant level — have shown that the automotive supply industry requires creativity and learning from its workers to generate products that are competitive in terms of both quality and cost. The ability and incentive of workers to use their insights and intelligence to contribute to productivity improvements depends on the organization of work at the plant level. High-performance workplaces, characterized by “high road” jobs in which productivity improvements and pay increases go hand in hand, are critical to sustained competitive advantage.

Our research reveals the important role of employee voice mechanisms in high-road work designs, not just in German and Swedish automotive suppliers where worker involvement is formally recognized, but also in supplier firms in the United States where productivity is generally viewed as solely management’s concern. Employee representation in strategic decision-making substitutes a stakeholder approach for the one-sided emphasis on “maximizing shareholder value”—a flawed ideology embraced by business schools over the past 25 years in which all that matters is the company’ stock price. Our research confirms, and helps to explain, a larger body of industrial experience that shows that compromises between the financial interests of shareholders and the productive interests of employees have had considerable success in continental Europe. To succeed in global competition, the US automobile industry needs more, not less, employee voice.

Different nations favor different forms of employee voice. German firms have works councils at the plant level, and in companies with 2,000 or more employees, under the system known as co-determination, equal representation of workers and shareholders on the board of directors, plus one neutral seat. Whether at the plant level or the board level, change requires workers’ input and consent.

In Sweden, union representatives have the more prominent role. Since 1976, Swedish companies have been regulated by an act of parliament, the Co-determination Act, stipulating that company management must consult unions prior to taking decisions on major changes such as corporate reorganization, new work conditions, or the introduction of new technology. Although this requirement ultimately does not displace managerial prerogative, it does give time for unions to investigate the matters being decided and consult with members at central and plant levels prior to decisions being made. In practice, the co-determination regulations are codified in collective agreements across the companies concerned. Not only do these arrangements for employee voice allow for better road-tested decisions in firms; they also confer greater legitimacy on the management of change. For this reason, initial employer opposition to this form of employee voice has now given way to broad acceptance.

In the United States, in publicly listed companies, the ideology of maximizing shareholder value reigns supreme, even though, it is an ideology that enables top executives and corporate raiders to extract value from companies at the expense of value creation. Nevertheless, one of the US companies that we studied had a 100 percent Employee Owned Stock Plan (ESOP) in which the scope for self-dealing by top executives is much more constrained. And in two publicly listed US companies, plant managers had instituted programs for tapping workers’ knowledge, with UAW members involved in one of the cases. Indeed, the workers at the unionized plant had only recently elected to have the UAW represent them because of the protection that it afforded against their jobs being shipped overseas.

The UAW has been seeking to become more proactive in questions of labor’s voice in productivity improvement. UAW president Bob King assumed his position four years ago, coming off his work as UAW vice-president in structuring wage concessions to Ford Motor Company that helped to keep it solvent in the 2008-2010 automotive industry crisis, while General Motors and Chrysler went bankrupt and had to be bailed out by taxpayers. But as King made the cost-cutting bargains at Ford, he also placed worker-management productivity agreements on the agenda as a sustainable way to keep automobile plants competitive in the United States.

UAW rules hold that King, now age 67, cannot run for re-election as UAW president at the end of his term in June of this year. But the “high road” drive to improve the productivity of manufacturing jobs rather than pursue the “low-road” alternative of cutting workers’ wages needs to transcend his presidency. The evidence shows that to sustain high-road jobs while maintaining workers’ standards of living in advanced economies such as Germany, Sweden and the United States, workers’ voice in improving competitiveness needs to extend beyond the plant level to include restraints on corporate financial policies that enable rapacious company executives and Wall Street predators to appropriate corporate cash while leaving workers with low pay or out of work.

German-style works councils are by no means a complete solution to the problem of generating competitive products in high-wage nations. As a foundation for engaging workers in the process of productivity improvement, however, the “high road” alternative presented by the VW Chattanooga union election was a choice that American workers should have embraced.

A version of this article originally appeared on Alternet, and at the OUPblog.

William Lazonick – University of Massachusetts Center for Industrial Competitiveness
William Lazonick is professor of economics and director of the UMass Center for Industrial Competitiveness. He cofounded and is president of the Academic-Industry Research Network. His book, Sustainable Prosperity in the New Economy? Business Organization and High-Tech Employment in the United States (Upjohn Institute, 2009) won the 2010 Schumpeter Prize.