In the lead up to presidential elections in recent years, both Republicans and Democrats have claimed that their policy platforms are better at improving the economic situation for minorities. Zoltan Hajnal and Jeremy Horowitz take a close look at both parties’ records on improving the economic situation for minorities, and find that under Democratic presidents, blacks and other minority groups see rising wages, falling poverty and unemployment rates, and that they tend to lose ground under Republican administrations. They also find that whites make similar gains under Democratic presidents.

Minorities are front and center in debates about the future of U.S. electoral politics. With the expanding racial and ethnic minority population increasingly favoring the Democratic Party, Republicans are anxious to find better ways to woo minority voters. Many GOP analysts claim that their policy platform really is better economically for minorities and call for new economic appeals. Does either party have a better economic case to make?

Using data from the U.S. Census to track annual changes in income, poverty, and unemployment over the past five decades, we asked how each of America’s major ethnic groups has fared under Democratic or Republican presidents. Our findings are striking. When Republicans are in the White House, minorities generally lose ground. But Democratic presidents have presided over steady and substantial improvements for communities of color – and the nation as a whole.

Trends in Income, Poverty, and Unemployment

Economic outcomes clearly diverge under Democratic versus Republican presidents – especially for African Americans. As Figure 1 illustrates, Under Democratic presidents, black families’ incomes grew on average $895 dollars annually, but grew only by $142 dollars under Republicans. The black unemployment rate fell by a net 7.9 percentage points across the 26 years of Democratic leadership, but went up by a net of 13.7 points during 28 years of Republican presidencies. Across the years of Democratic leadership, black poverty declined by a net of 23.6 percentage points, but grew by three points when Republicans the White House. 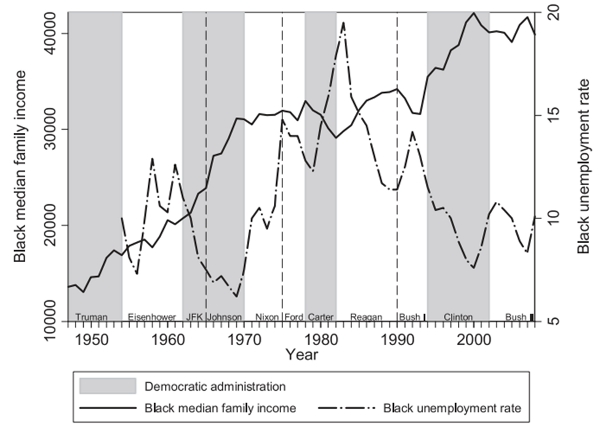 Although data on Latinos and Asian Americans do not go back as far in time, the results are similar. For Latinos, Democratic presidencies are associated with large annual gains in income, substantial declines in poverty, and real drops in unemployment, while under Republican administrations Latinos tend to lose income, become poorer, and experience greater unemployment. Latino incomes grew an average of $627 annually under Democrats, but declined by an average of $197 annually under Republicans. Less consistent data for Asian Americans also suggest gains under Democrats versus stagnation under Republicans.

Tellingly, white Americans make gains under Democrats, too. On average, under Democratic administrations, white incomes have grown, and white joblessness and poverty have declined.

Could the Trends Be Coincidental?

Like all social scientists, we probed our data to see if the racial and ethnic trends might be explained away by other factors. Perhaps Democratic presidents have gotten lucky and presided over expanding economies, while Republican leaders have happened to win office in depressed times. Three different sets of analyses suggest that this is not the case. Partisan differences persist after one takes into account the overall state of the economy or other longer-term trends in U.S. well-being. Controlling for inflation and changes in the gross national product, and considering other factors like oil prices and the proportion of adults in the work force, we find similarly large gains for minorities under Democrats and equally sharp losses under Republicans.

The partisan trends are remarkably consistent over many years. Black incomes grew in 77% the years that Democrats held the presidency; black poverty declined in 88% of those years; and black unemployment fell in 71% of those years. In sharp contrast, blacks more often than not lost under Republican administrations. The longer Democratic administrations are in office, the more they appear to be able to help African Americans and other minorities experience economic gains, while the longer Republican administrations hold office, the more the fortunes of these groups suffer.

It is not just that Democrats inherit good economies and Republicans are bequeathed bad economies. Everything points to a real and substantial partisan divergence.

Why Do Democrats Do More to Boost Incomes and Reduce Poverty?

Many policy differences between Democrats and Republicans can help to explain minority gains under Democrats. Policies intended to boost the incomes and employment of poor or lower-income Americans could certainly play a role. Examples range from President Lyndon Johnson’s War on Poverty to President Bill Clinton’s expansion of the earned income tax credit (which gives low income working people a tax refund check). Racially targeted efforts like the Civil Rights Act or more recent initiatives to expand affirmative action in government hiring can also buoy minority economic fortunes, as can a range of policies that disproportionately impact minority communities, such as education efforts and immigration reforms.

Any policy that encourages overall economic and job growth can make a positive difference for minorities – along with everyone else. Democratic presidents tend to place more emphasis on such overall economic growth, while Republicans often stress reducing inflation, even if unemployment ticks up as a result.

Going forward from 2012, Republicans are likely to intensify their efforts to woo minority voters – often by stressing that they will be better stewards of the national economy than Democrats. But voters will look to see which party actually delivers. The relationship between minority well-being and party control is so consistent and so substantial that Democrats clearly have the more plausible case to make. Their policies have done more to help minorities and whites alike. Given that most U.S. children are now born to minority parents, it will become all the more true with every passing year that economic gains for minorities also make the economy stronger for all Americans.  When it comes to boosting incomes and reducing poverty and joblessness, we are all stand to rise and fall together.

This article is based on the paper Racial Winners and Losers in American Party Politics in Perspectives on Politics.

Zoltan Hajnal – University of California-San Diego
Zoltan Hajnal is Professor of Political Science at the University of California-San Diego. A scholar of racial and ethnic politics, urban politics, immigration, and political behavior, Dr. Hajnal is the author of Why Americans Don’t Join the Party: Race, Immigration, and the Failure of Political Parties to Engage the Electorate (Princeton 2011 – Winner of the APSA’s Best Book on Race/Ethnicity), America’s Uneven Democracy: Race, Turnout, and Representation in City Politics (Cambridge 2010 – Winner of APSA’s Best Book on Urban Politics) and Changing White Attitudes toward Black Political Leadership (Cambridge 2006).

May 12th, 2014|Economy, Elections and party politics across the US, Jeremy Horowitz, Zoltan Hajnal|3 Comments
Previous post Next post